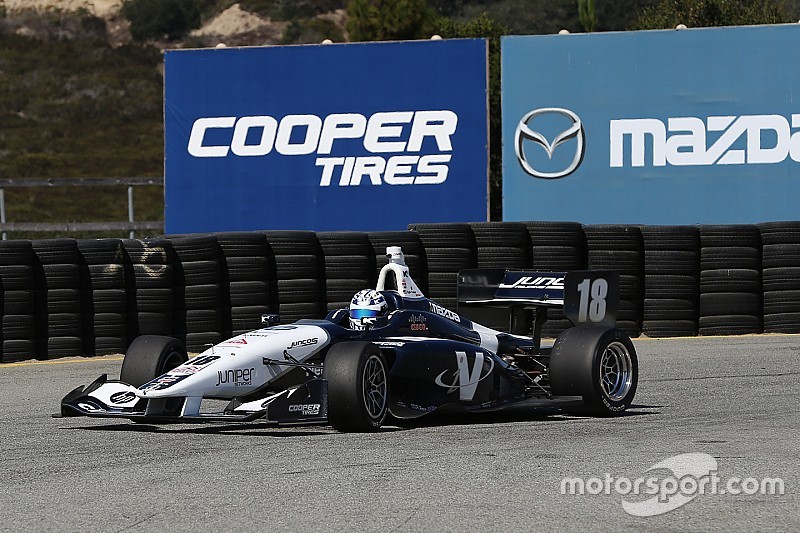 Juncos Racing’s Kyle Kaiser, very much an outside for the championship, took pole for this afternoon’s Round 17 of the 18-race championship, clocking a 1min15.2733sec lap around the classic 2.238-mile venue in Monterey County, Calif.

That put him 0.12sec faster than Carlin Racing’s Ed Jones who is just one point off the lead in the title race, held by Santiago Urrutia, who qualified third. The Schmidt Peterson Motorsport racer, who enjoyed a successful IndyCar test at Sonoma Raceway on Thursday, can at least take solace in the fact that the third main contender for the crown, Dean Stoneman of Andretti Autosport, is languishing in eighth on the grid, despite being fastest in free practice yesterday.

Zach Veach, who won the last round at Watkins Glen will start fourth for Belardi Auto Racing, with the second Carlin car of Felix Serralles in fifth. Sean Rayhall has made a very impressive return to the Lights field, qualifying sixth for Team Pelfrey, whose Lights team was formed from the remnants of his former team, 8Star Motorsports. Teammate Garret Grist will start seventh, alongside Stoneman, while Andre Negrao is ninth in the second Schmidt Peterson machine alongside another Juncos car, that of Zachary Claman De Melo.

There are three rounds of Pro Mazda racing this weekend, as the Iowa race was canned earlier this year due to low grid numbers. There are still only 12 here at Laguna Seca, but the grid for the first round could set the theme for the weekend, and is a microcosm of the season as a whole. The only true title contenders, Aaron Telitz and Patricio O’Ward, have locked out the front row for Team Pelfrey, and their battle has been a curious affair with both enjoying periods of dominance.

Polesitter Telitz outqualified O’Ward for today’s race by almost 0.6sec, and this has reflected his momentum in the second half of the season. Although he has won only five races to O’Ward’s six, the Wisconsin native has been the far more convincing through the summer than his Mexican-born teammate, who hasn’t won since May.

Nicolas Dapero has been the surprise of the weekend, qualifying third for Juncos Racing, ahead of the third Pelfrey machine of TJ Fischer. Fifth place on the grid went to Nico Jamin, the only non-Pelfrey driver to reach Victory Lane this year. The Cape Motorsports with Wayne Taylor Racing driver dominated the last two races, at Mid-Ohio six weeks ago, but his 1.6sec deficit to polesitter Telitz perhaps reflects his status as driver on a one-car team.

The Frenchman and reigning USF2000 champ will be starting alongside the driver with whom he’s squabbling over third in the championship, Juncos Racing’s Will Owen. Jake Parsons in a third Juncos car will start seventh, with series debutant Joseph Burton-Harris in eighth.

Cape Motorsports duo Anthony Martin and Parker Thompson are the drivers fighting for the USF2000 crown in their two races this weekend, but they have been beaten to pole here at Laguna Seca by Victor Franzoni.

The Brazilian, who races for ArmsUp Motorsport, has scored just one win this season but retains an outside shot at the title due to his commendable consistency, and regular “best of the rest” status behind the Cape crusaders. He was almost 0.35sec faster than championship leader Martin, who declared in an interview with Motorsport.com this week his intention of graduating to Pro Mazda next season.

The Australian leads the championship by 21 points after scoring seven wins this season. Psychologically, the momentum also rides with him having dominated Mid-Ohio with three wins. However, Canada’s Thompson is third on the grid and will be eager to eat into that points lead and was mere hundredths slower in qualifying.

This is the final weekend of racing for the antiquated Van Diemen USF2000 car, which will be replaced by the Tatuus USF-17 next season.

In Memory of Smokey Yunick