Indy Lights, Pro Mazda and USF2000 all created some great racing this year. But now it’s time to separate those who produced occasional eye-catching performances from those who operated at that level all season.

It’s tricky enough judging drivers across one series, even a spec series, when you’re pondering the intangibles of their teams, their good luck/bad luck in terms of mechanical reliability or getting caught up in someone else’s accidents, etc. So you can only imagine the difficulties involved in judging across three series. Was the Pro Mazda champion – who had to beat only five other full-time drivers – as good as the guy who finished third in the USF2000 championship? Well then you have to judge how he compared with his teammate, the guy with the same equipment…

You see the problem? And so we asked for help from Mazda Motorsport North America executives who cast a collective vote, and also Joel Miller. As well as being one of Mazda’s IMSA Prototype aces, Joel advises in Race Control for Mazda Road To Indy races, he’s the driver coach/mentor for USF2000 drivers… and he was primary development driver for next year’s gorgeous new Tatuus USF-17 Mazda.

And if you think Miller would just toe the Mazda company line in terms of evaluating these young drivers, check out the table at the end; there are a couple of major differences.

(Championship and championship position in parentheses.
Drivers needed to have participated in at least 75 percent of the season, hence no Felix Rosenqvist)

Felix Serralles – Carlin Racing
(Indy Lights, 6th, 2 wins)
DG: Serralles was a slightly better version of his 2015 self - he was a front-runner more often and had fewer incidents. He still was not quite consistent enough for a potential title assault, though.

Victor Franzoni – ArmsUp Motorsports
(USF2000, 3rd, 3 wins)
Mazda: The always-smiling Brazilian proved to be the only driver capable of keeping up with the dominant Cape Motorsports duo while running with the over-achieving ArmsUp Motorsports team.
JM: This driver would be higher on my list if ties were possible.  Victor showed speed and maturity in USF2000 and I think he will be a major force if moved up to Pro Mazda in 2017 for his 3rd year in MRTI. 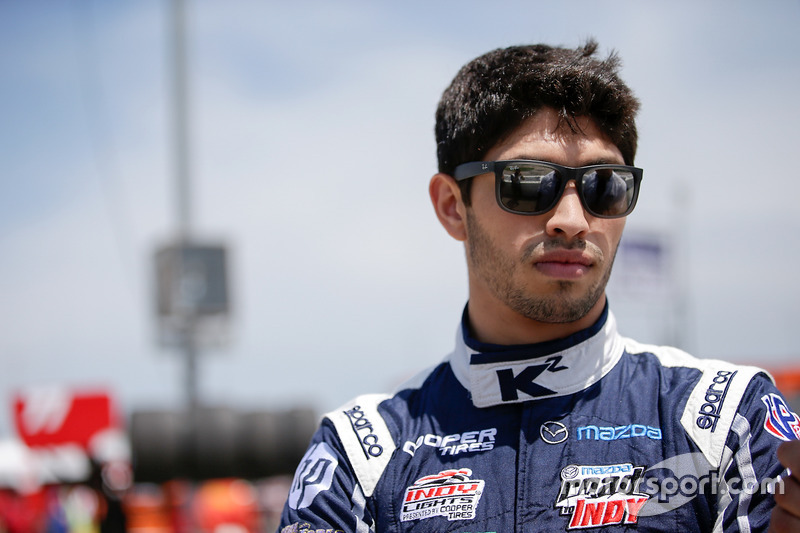 Mazda: The young Californian was likely the most improved driver between 2015 and 2016. In his second Indy Lights season with Juncos, Kaiser earned an impressive win on the one-mile oval at Phoenix and again in the first of two races at Mazda Raceway Laguna Seca.

VK: Kaiser's progress through the MRTI ranks has been steady, and 2016 represented one of the bigger steps so far. His season started well and it ended well, but the midway patch was too middling to allow him a fight with Jones and Urrutia.
DG: Kaiser is not a bad driver but it was surprising to see him win and be championship leader after three races, but he will certainly be a title favorite next year. 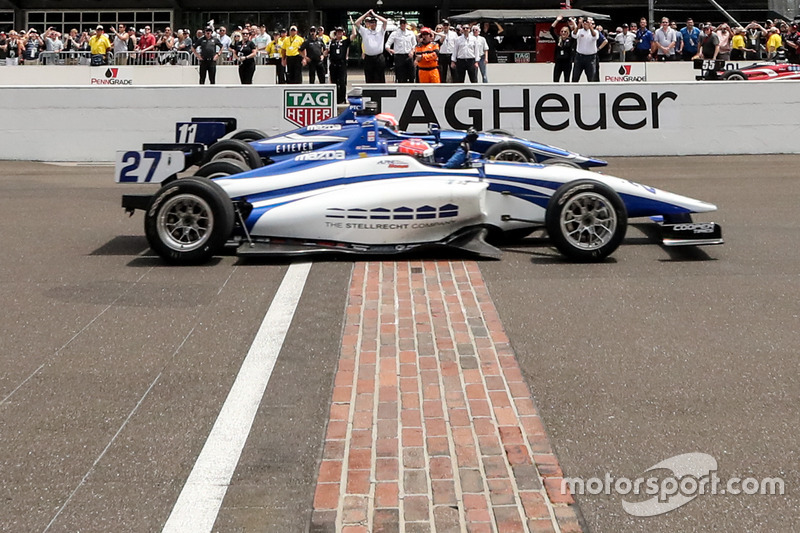 DM: Given that Andretti Autosport came into the season having not yet proven it had a proper handle on the Dallara IL15 Mazda, the fact that Stoneman scored two wins and five other podium finishes is a hell of an achievement. Without a couple of very odd mechanical issues, he would have been an easy third in the Lights championship. His experience showed in the amount of pressure he could soak up from challengers in faster cars.

DG: Just by winning the Freedom 100 at Indy, Stoneman's decision to leave Europe was already justified. He had a great if sometimes erratic rookie season and should go for the title next year.

VK: Stoneman's debut campaign overseas was admittedly a little patchy and ended on a low note – but it shouldn't overshadow just how quickly he clicked with both road course and oval racing in the US. Andretti's IL15 efforts have so far underwhelmed – but none of the team's other drivers since the car's introduction have come close to the Brit. 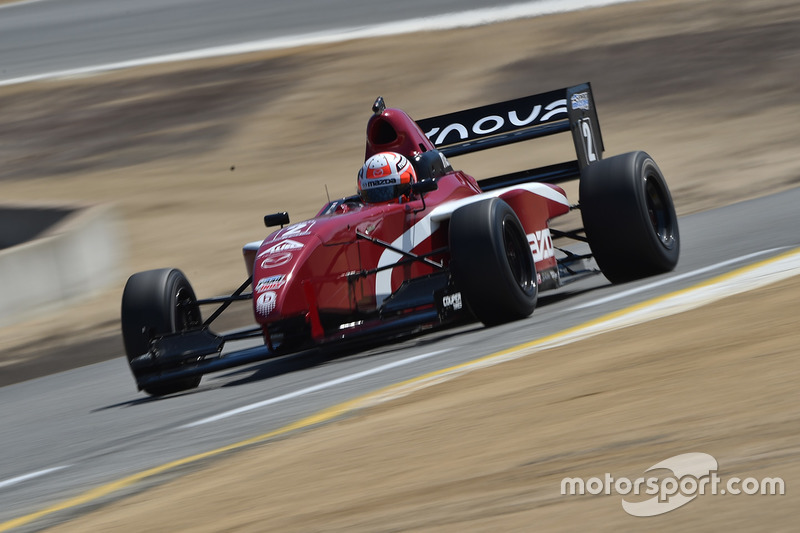 JM: Despite being only third in the Pro Mazda championship, Nico was the only driver to take the fight to the Pro Mazda power house team with a sweep of the Mid-Ohio race weekend.  He will be one to watch with the move up to Indy Lights.

Mazda:The Frenchman was one of the few to stop the Team Pelfrey juggernaut with two wins at Mid-Ohio. His numbers didn’t match his record-setting championship season in USF2000 in 2015, but showed the pace to earn a top Indy Lights seat (Andretti Autosport) for 2017.

DM: One can only imagine how fast Nico might have been in a Team Pelfrey car. I suspect he would have been ahead of both Aaron Telitz and Pato O’Ward. 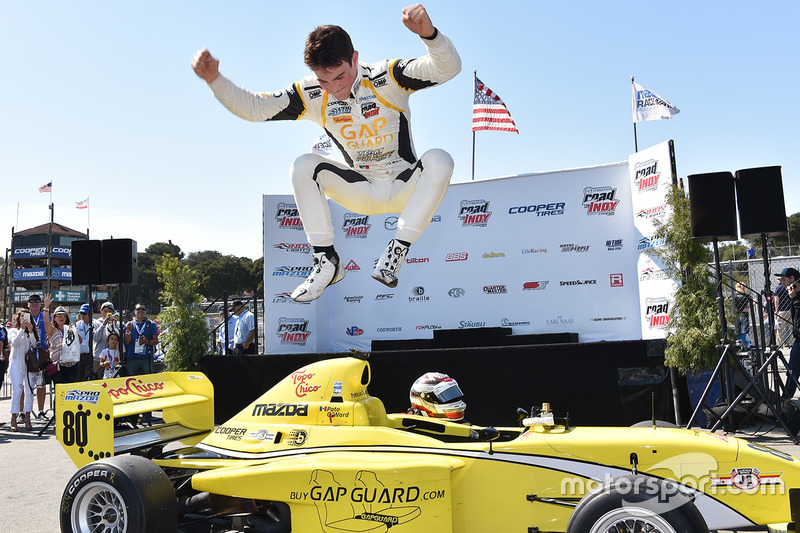 VK: Not even 16 when he arrived on the Mazda Road To Indy last year, O'Ward had shown well in Europe and Latin America prior to his Pro Mazda turn – and looked set to run away with the title in his second season before an unlikely slump allowed Telitz to catch and pass him.

Mazda: The young native of Mexico drove beyond his years to win seven times – a tally matched by only one other driver in the three levels of the Mazda Road to Indy. ‘Pato’ also drove in the Mazda Road to 24, making a few starts in the Prototype Lites series and earning a podium finish at Sebring.

JM: A good driver on the best team showed what dominance was all about early in the season. With another season of racing under his belt good things could be ahead. 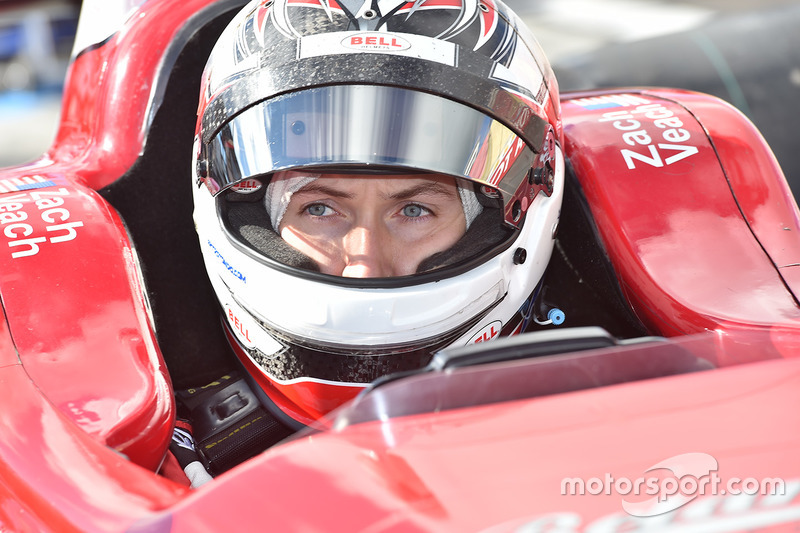 Mazda: Veach made a return to Indy Lights after a sabbatical in 2015. He had three impressive wins and was the hottest driver in the final months of the season. Suffered some bad mechanical luck that hurt his title chances, but had top-fives in the final five races of the season.

JM: Showed pace all year and was lightning fast at times.

DM: Veach can make winning look so easy and were it not for his car crapping out in the first St. Pete race while leading, he would probably now be the Lights champion. The only reason I ranked him only seventh is that part-time rookie teammate Felix Rosenqvist (who I rate highly, incidentally) looked more than a match for Zach, and needed eight fewer races to match Veach’s tally of three wins. 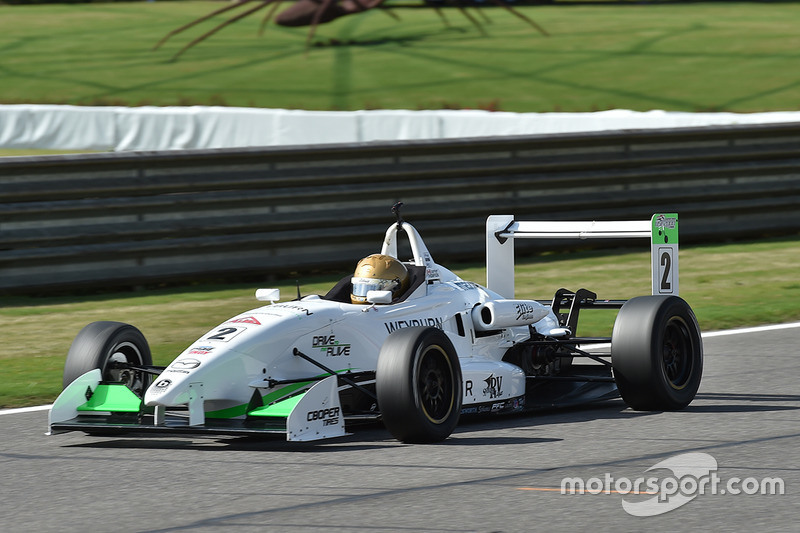 DG: 2016 was still only Thompson's second year in cars so it was rather impressive to see him produce a mistake-free campaign. He had two bad races just like championship-winning teammate Anthony Martin, rival but in the Canadian's case, neither of them were from his own error.

VK: Thompson might have had the best equipment at Cape, but he proved himself worthy of the machinery. He more or less matched Martin early on and, even when the Aussie hit his stride, Thompson ran him close enough to ensure an entertaining title battle.

JM: Parker was Mr. Consistency all year in USF2000 but needed to win races when it counted. His speed is not in question but focusing on race craft and having a longterm view of the season will be good improvements. 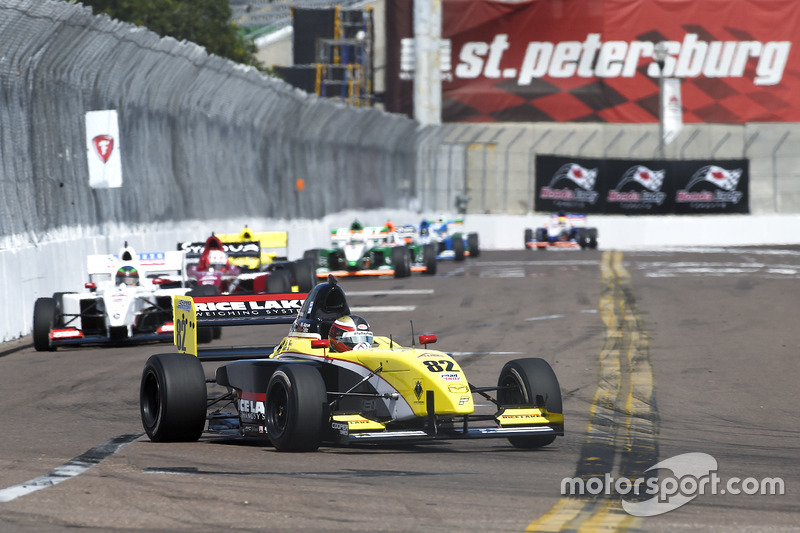 Mazda: It was a tale of two seasons, as Telitz earned the Pro Mazda championship when he came on strong to win six times - mostly late in the year – versus his Team Pelfrey teammate O’Ward, who had dominated the first half of 2016. The Wisconsin native will carry the Mazda Soul Red colors into Indy Lights in 2017.

VK: That Telitz could turn the tide of the Pelfrey-exclusive Pro Mazda title battle against O'Ward looked completely implausible halfway through the campaign. But, whether brought on by crucial experience gains or more favourable tracks, the turnaround did happen – and it was super impressive.

DM:He scored one fewer win than teammate O’Ward, but what puts him ahead in my rankings – and more importantly, the championship table – is that he banked good points whenever he couldn’t win. 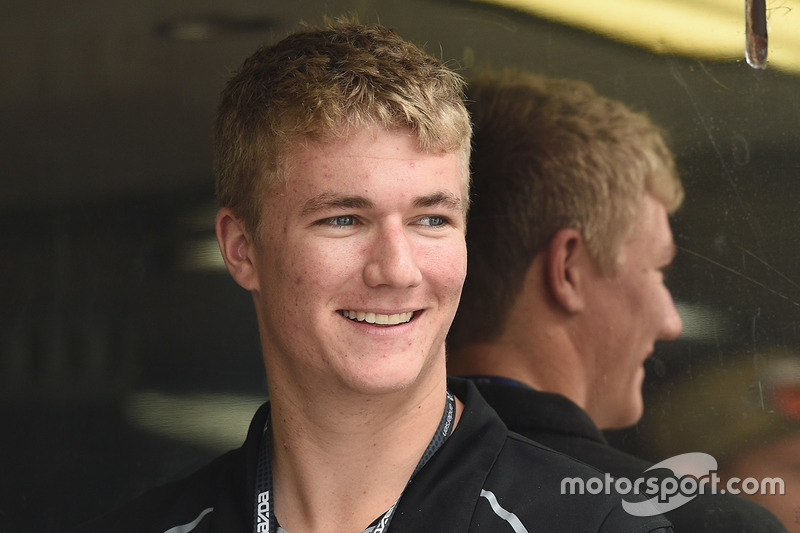 Mazda: The young Australian showed steady pace as a rookie in the USF2000 series in 2015, and then blossomed in 2016 to win seven races. Martin beat his teammate Parker Thompson for the USF2000 championship and caught the eye of 2014 IndyCar champion and fellow Aussie Will Power as he built his win total through the year.

VK: Having finished the 2015 USF2000 season as the best rookie by a clear margin, Martin was an obvious favourite for this year after switching to the dominant Cape team. A muted run in the St. Pete opener aside, the predictions played out as expected, the Aussie bringing the title home after a convincing campaign.

DM: I have very high hopes for this guy because I haven’t seen any obvious flaw in either his qualifying speed nor his race craft. He got used to starting from the front of the USF2000 pack and pulling away, but he was also hard, clean and fair on the occasions when he really had to scrap. The most clearly deserving of the MRTI champions. 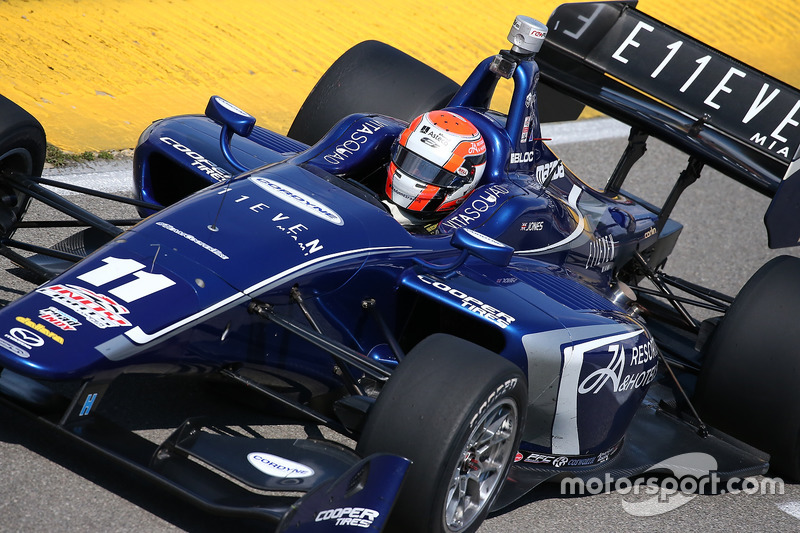 JM: Showed consistency all year and learned from his first year in the MRTI’s top level to put together a solid run for the championship.

Mazda: Seven drivers won races in Indy Lights in 2016 in a towering battle for supremacy, but Jones topped them all to take the championship. While he had only two victories, Jones' speed in qualifying was unmatched as he grabbed eight pole positions. Jones thus earned the scholarship that propels him into the Verizon IndyCar Series for at least three races (including the Indy 500) in 2017 and in fact has a full-season deal with Dale Coyne Racing.

VK: Jones' Lights title was won in controversial fashion, when teammate Serralles moved aside for him in the finale, elevating Jones from fifth to fourth, giving him enough points to finish ahead of Urrutia. But it was hardly a controversial outcome for the season as a whole. With a year of experience in Lights and a prior, reasonably successful European career, Jones was both the quickest and most consistent driver in the series. 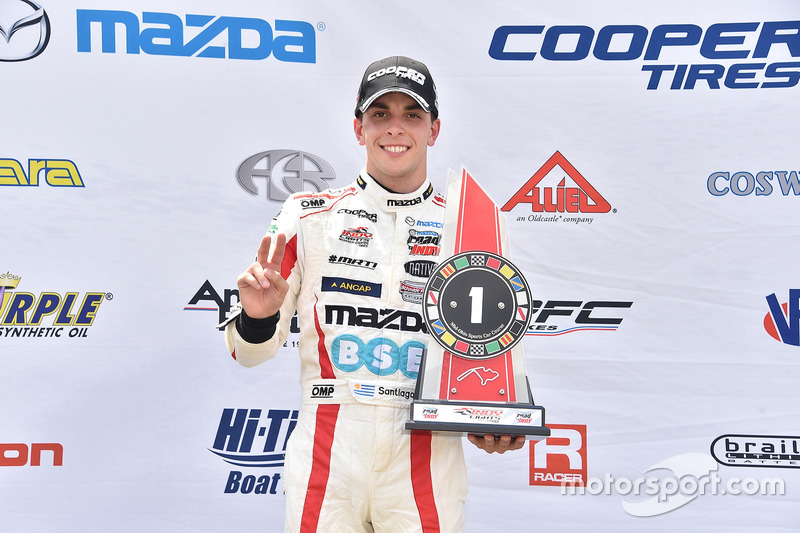 Mazda: The mercurial Uruguayan showed immense speed in Indy Lights, finishing second in the championship. He had a series-leading four wins and 13 top-fives, but also had four finishes of 11th or worse which cost him the title. “Santi” often clashed with his competitors on and off the track, a trait that needs to cease.

DG: Not a lot separated Jones's and Urrutia's season as a whole but what made the latter more impressive was his rookie status. He did not need much time to get up to speed but a couple of poor results in the beginning proved to be costly.

JM: Was a clear pace setter in Indy Lights and fought for the championship until the last race.  This driver could be one to watch if on- and off-track incidents are reduced.

DM: Urrutia’s talent is undeniable, his aggression is entertaining to watch. But the final race was not where the title was ‘stolen’ from him. Instead, he should look inwardly and recall Watkins Glen, where he burned off his tires, enforcing a pitstop that dropped him to 12th. In that same race, his appreciably less talented teammate took third… and Jones finished second.

VK: Urrutia missed out on back-to-back MRTI titles, but his Lights campaign in 2016 was arguably more impressive than his Pro Mazda title-winning run the year before in terms of the strength of his opposition. That the Uruguayan is properly talented was evident from his exploits in Formula Abarth and F3 in Europe – but what Lights made clear is that Urrutia can deliver at a higher level of competition and faster cars.