Oliver Askew of Andretti Autosport led every lap in both Indy Lights races to extend his points lead over Rinus VeeKay to 45 points, while RP Motorsports’ Kyle Kirkwood also visited Victory Lane twice to close in on the Indy Pro points lead. 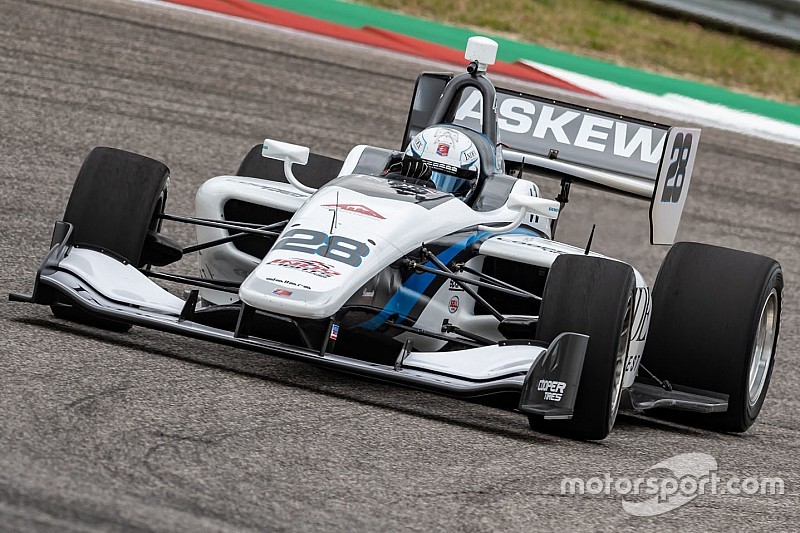 Oliver Askew, dominant pole-winner for Andretti Autosport maintained his advantage at the start of Race 1 although teammate Robert Megennis stayed level down the front straight. Toby Sowery in the BN Racing entry lost third place to Andretti’s third car, that of Ryan Norman on Lap 2, but then fell further back with a spin. However, he wasn’t quite last thanks to Aaron Telitz spinning his Belardi machine on the opening lap, and Dalton Kellett running his Juncos Racing machine well off the track out of the final turn.

Kellett’s teammate Rinus VeeKay held fourth in the opening stages but couldn’t live with Norman, who was keeping pace with Askew and Megennis, the trio covered by 2.5sec after five laps.

On the 10th lap, just as Askew got out of push-to-pass range of Megennis, the field was brought under caution. Sowery, on a big charge after his Lap 2 error, got out of shape through Turn 11 and spun into the tire barrier, ending up half on the track and stalled.

The restart at the beginning of the 14th of 30 laps was uneventful and Askew pulled his lead out to 1.2sec in just one lap. On Lap 16, Askew was beyond the P2P threshold of 1.5sec. That gave Norman his chance to move in on Megennis, and he had a long look at an outside pass on his teammate at Turn 4 on Lap 18. Behind them, VeeKauy was licking his chops in anticipation of pouncing on the pair of them. The following lap, Norman completed the pass to grab second and VeeKay moved in to threaten Megennis.

VeeKay tried to go around the outside of the Andretti car at Turn 4 on Lap 23, but Megennis ran him wide and forced him to back off. The following lap, VeeKay closed on Megennis down to Turn 2 and stuck with him on corner exit, drawing alongside very early on the straight and maintaining his momentum to grab third.

VeeKay was now just under three seconds adrift of Norman, who was a similar distance behind Askew.

On his penultimate tour, Askew set his and the race’s fastest lap by over 0.2sec and the victory – his fifth of the season – was his. Norman, VeeKay, Megennis and BN’s David Malukas and Belardi’s Lucas Kohl completed the top six.

Race 2 saw Askew hold off fellow front-row starter VeeKay and Sowery at the drop of the green, but at Turn 1 Megennis on the outside and Dalton Kellett on the inside made contact and both cars and Telitz’s Belardi car visited the scenery on corner exit. Kellett’s spin and stall brought out the yellow.

On the restart Askew simply disappeared from VeeKay, immediately pulling out a 2.7sec lead, as the Dutchman had his mirrors full of Sowery and Norman. On Lap 4, Sowery passed the Juncos car to claim second and started pulling away. In fifth, Lucas Kohl led David Malukas by just a quarter-second. Further back, Megennis had to come to the pits after understeering into Telitz at Turn 4, spinning him around.

Malukas passed Kohl for fifth on Lap 9 but Norman was by now 4.3sec up the road.

Sowery was never close enough to Askew to use his push-to-pass boost, while VeeKay struggled to keep hold of Sowery without using his push to pass. He got the gap down to half a second on Lap 25 but locking up his front-right into the Keyhole hurt him, and he was never quite close enough to make a serious try at passing.

Askew set his fastest lap on his final lap, without the aid of P2P of course, and won by 5.2sec, to extend his points lead to 45. Sowery held on to second, beating VeeKay by 0.65sec, with Norman seven seconds back in fourth. Malukas was fifth, with Telitz passing teammate Kohl to claim sixth.

After a false start in Race 1 was waved off, polesitter Kyle Kirkwood edged his RP Motorsport machine into the lead and Juncos Racing’s Rasmus Lindh retained second despite a challenge from Abel Motorsports’ Parker Thompson into Turn 4, that saw the Canadian drop a wheel off the track and fall to sixth behind the second RPM car of Ian Rodriguez, Sting Ray Robb in a second Juncos car and Moises de la Vara’s DE Force Racing car.

However, on Lap 3, Thompson suffered a transmission issue, while his Abel teammate Jacob Abel tangled with Danial Frost’s Exclusive Autosport car at Turn 3. The race immediately went under caution.

The restart saw Kirkwood lead Lindh, Rodriguez, Robb, de la Vara, and Nikita Lastochkin of Exclusive Autosport, but Rodriguez moved up to second on the run down to Turn 4, while de la Vara fell behind Lastochkin, Philippe Denes (Fatboy Racing) and Antonio Serravalle (PSerra Racing/Jay Howard Driver Development). The battle between 2-3-4 was an entertaining one and on Lap 13 Robb went down the inside of Lindh for third at Turn 4. However, he couldn’t pull away and had to start driving on his mirrors to keep Lindh back, which simultaneously blunted his own challenge to Rodriguez.

Then De la Vara spun, got going and then stopped just off track at Turn 4, bringing out the caution with five laps to go. On the restart, Robb took Rodriguez down the inside at Turn 1 but having run deep at Turn 2 as Lindh and Rodriguez battled behind him, Robb was overvigorous in his defense down the next straight. Not only did the muddle allow Lindh to regain second, but Race Control decided Robb had done Rodriguez dirty and ordered him behind the #5. In fact, Robb fell behind Lastochkin, too.

A compressing of the rear field at the start of Race 2 saw a collision that provided Antoine Comeau’s Turn 3 Motorsport with a little air and a broken wing, and de la Vara and Lastochkin suffered punctures and headed to the pits next time by. Frost who had started his Exclusive Autosport on the outside of the front row beside Kirkwood was adjudged to have triggered the chain reaction and was sent to the back of the field for the restart.

Kirkwood who now had the front row to himself easily moved into the lead chased by Thompson and Robb, the latter not quite able to outbrake the Canadian at Turn 4. Rodriguez, Lindh, Denes and de la Vara were in hot pursuit. Next time by, Lindh had muscled past Rodriguez to take fourth, and de la Vara was ahead of Denes.

Initially, this didn’t look like a Kirkwood demonstration run, since after seven laps his lead over Thompson was still only 0.7sec, the pair of them running 1.6sec clear of the Juncos pair who in turn were 2.6sec up the road from Rodriguez. Denes reestablished himself ahead of de la Vara.

Then Kirkwood started easing away so that on the 10th of 25 laps his lead was out to 1.5sec. The gap stayed around that figure for several laps, while Thompson appeared able to respond whenever Robb got close. Further back, however, Frost had made his way back up to seventh on Lap 17 right behind Denes and duly dispatched him.

Then the full course yellow came out on Lap 20 for a spin by de la Vara after which he got beached at Turn 9. At the same time, Charles Finelli parked his car with mechanical problems on the exit of the pitlane.

At the restart, Robb dived down the inside of Thompson at Turn 1, got the job done and it opened the door wide enough for Lindh to nip through, too. Meanwhile Frost got around Rodriguez for fifth but the RPM driver returned the favor on the following lap. Kirkwood, meanwhile pulled away to score his fifth win of the season ahead of Robb, Lindh and Thompson.

Hunter McElrea of Pabst Racing led Race 1 from pole ahead of Christian Rasmussen’s Jay Howard Driver Development entry, but into Turn 2 the Dane dived to the inside to snatch the lead. Meanwhile Matt Round-Garrido, who had started sixth, made a perfect start and was quick on cold tires, snatching third. The yellows flew, however, for Timmy Pagliuso spinning off at Turn 4.

On the restart, BN Racing’s Round-Garrido deposed McElrea through Turns 4 and 5, allowing Rasmussen to flee, as Round-Garrido didn’t have the pace to keep up. Indeed, he soon had a conga line of cars behind him, so at the halfway point, Rasmussen’s lead was 4sec, but behind Round-Garrido queued the four Pabst cars of McElrea, Colin Kaminsky, Bruna Tomaselli and Yuven Sundaramoorthy, along with the Cape Motorsports trio of Jak Crawford, Braden Eves and Darren Keane – and also the DE Force car of Manuel Sulaiman and the Legacy Autosport machine of Zach Holden.

On Lap 17, finally, the dam broke. McElrea and Kaminsky passed Round-Garrido at Turn 4, with Holden taking Sulaiman down the inside at Turn 1 next time by. Immediately, McElrea pulled a second clear of Kaminsky but he was now nine seconds behind leader Rasmussen and there were only a couple of laps left. Thus the Jay Howard protégé scored his second consecutive win while McElrea and Kaminsky completed the podium. Round-Garrido held firm in fourth and Tomaselli clinched her best result of the year with fifth ahead of teammate Sundaramoorthy.

In Race 2, McElrea made a faultless start to lead Rasmussen into Turn 1, ahead of Kaminsky, Sundaramoorthy and Holden fifth. Round-Garrido made another superb start to grab sixth from 10th on the grid ahead of Eves and Crawford, although the latter lost eighth to Jack William Miller on the following lap. On Lap 3, however, Crawford was back ahead and the pair of them were into the top eight as Eves fell back.

Holden passed Sundaramoorthy for fourth on Lap 4, but already he was four seconds behind the McElrea vs Rasmussen battle at the front, and 1.9sec behind Kaminsky.

Sundarmoorthy fell behind Round-Garrido and Crawford, while Miller dropped well outside the top 10 with a grassy moment on Lap 8.

McElrea’s lead over Rasmussen was 1sec at Lap 13, with Kaminsky a further 4.6sec back, Holden 1.2 away in fourth, and Crawford finally getting around Round-Garrido for fifth – but 5sec behind Holden. Darren Keane’s Cape Motorsports machine outbraked Sundaramoorthy for seventh at Turn 4 on Lap 16, and was into sixth ahead of Round-Garrido on the following lap.

A penultimate lap clash between Sundarmoorthy and Round-Garrido dropped them outside the top 10 on the final lap. Meanwhile, McElrea won by half a second, and Rasmussen beat Kaminsky by 7.6sec. Holden was tucked up under Kaminsky’s rear wing, Crawford was fifth, and Keane took sixth, 11 spots up from his starting position.

Carpenter: VeeKay has “all of the tools” to compete in IndyCar