Peter Dempsey: The 2012 season in his own words

Firestone Indy Lights driver Peter Dempsey recently reflected on his 2012 racing season in a blog for IndyCar.com. In a season of ups and downs that--on the positive side--included three top-five finishes, the impressive Irish driver ultimately ended the year on a high note after finding a home with Belardi Auto Racing and securing a full time ride with the team for the upcoming 2013 season. 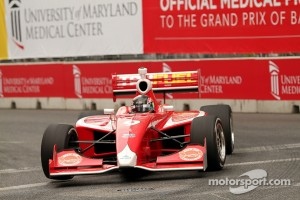 Heading into 2012, I really wasn’t too sure how much racing I was going to be able to do. It was the same old story regarding the most important part of racing called dollar bills.

I was fortunate to be able to do some winter testing with Andretti Autosport and Juncos Racing and felt I was ready to take on the Grand Prix of St. Petersburg. Unfortunately, I was still unable to secure a drive in time for the first race. Instead, I went to the race as a coach for a new driver in the series. I continued to coach him for the next few weeks, testing and trying to get him up to speed as much as possible. With him being a gentleman (older) driver competing with a lot of young talent, this was never an easy task!

I attended the next two races at Barber Motorsports Park and the Toyota Grand Prix of Long Beach (my favorite event) and made sure to bring my race gear to both events – you just never know what could happen! It was certainly frustrating being stuck on the sidelines, but it was important to keep my face around the paddock because you never know where the next door may open. I was also doing some work with the INDYCAR Nation Fan Club at each event. That was great as I got to meet many of the fans during these events, and it was fun to really interact with them. To me, the fans are what make racing – without them we wouldn’t have a whole lot!

Coaching my driver opened up driving opportunities at the Firestone Freedom 100 and the Detroit Belle Isle Grand Prix. With a new team and no testing, heading to Indy was a difficult task. We really struggled at the open test, but we knew what we had to do to improve. We rolled out for qualifying and ended up P13, which was disappointing. Starting at the back of the pack for the race was less than ideal, and we ended up getting involved in a crash on Lap 4, which ended our day.

Detroit was a new track to everyone, but I knew we could put on a strong showing. We qualified P5 which was great considering I only had one new set of tires for qualifying – and I didn’t even use them! The race started out great. I was the fastest car on the track and had passed the Sam Schmidt Motorsports cars of Esteban Guerrieri and Tristan Vautier, moving up to P3. Quickly chasing down the two leaders, I made a move that ended in a big crash and another race with a DNF. It was very disappointing knowing this was a race we could have won.

My first race with Belardi Auto Racing was at the Honda Indy Grand Prix of Toronto. We had done no testing together and were thrown straight into the race weekend trying to get to know each other. It was important to get a solid finish, and that’s what we did. After a race-long battle with Oliver Webb, we finished in a strong fourth place!

The Grand Prix of Edmonton was up next. This was a track I felt I struggled at in 2011. We really did our homework before this event and rolled off the truck with a fast car. We were P2 in practice and lost out on the pole on the last lap of qualifying, ending up P2. The race didn’t go as I had hoped. I hit the ignition switch off as the green flag dropped – which was needless to say – less than ideal! I dropped all the way to the back of the pack, and a pit stop and two spins later, we ended up finishing P5. The result really showed how much pace we had and that we had certainly missed an opportunity to be on the podium.

The Grand Prix of Trois-Rivieres was after Edmonton. That event has been one of my favorite races since coming to the USA back in 2008. For the second week in a row, we rolled off the truck with a great car. Practice went well. We ended up P2, and the car felt great! This qualifying was different, as we had a “fast six shootout” where the six fastest cars went out again to determine their qualifying positions, like they do on road/street courses in the IZOD IndyCar Series. We scraped into the fast six and even saved a set of tires for the final shootout and the race.

After four laps in the shootout qualifying session, I tagged the wall and ended up P5. That was my mistake, and I promised the guys on the team that I would make up for it in the race. I did just that, moving from P5 to P1 on the first lap. The conditions were very tricky as it had been raining, and we were on slicks. I was feeling good up front until Lap 9 when we encountered some gearbox trouble that unfortunately put us out of the race. That was another podium that we didn’t get!

The Grand Prix of Baltimore was an average weekend for me. With a tricky chicane on the front straight, I hit the wall three laps into qualifying and had to start at the back. I really wanted to get a decent result for the team and bring home our TruFuel #9 car with a solid finish. Thankfully, we accomplished that with a fifth place finish and had our third top-five finish in four starts together.

Auto Club Speedway at Fontana was my first oval experience with the Belardi Auto Racing guys, and what a weekend we had! We struggled for pace due to an engine problem in the first practice. We then decided to do an engine change which led to us missing qualifying, meaning we started from the back again! We topped the second practice by 0.2 seconds that evening, showing everyone that we had a good car. Starting at the back for a race is always tough. We made good progress and were up to P5, but then it all went downhill from there. Within the span of two laps, I jumped a restart, got called in for a drive through penalty, my oil cooler burst due to some debris, and I made contact which resulted in a puncture. Unfortunately for us, we ended our season with another DNF!

All in all, it was a successful season for me as I really found a great home with Belardi Auto Racing and really enjoyed the second half of the year. None of this could have happened without them and all of my sponsors, TruFuel, Liberty Engineering, MoeryLAI, HMS Motorsport and Motorsport Ireland.

I could not have wished for a better end to my season, getting to participate in the Mazda Road to Indy test at the road course at Indianapolis Motor Speedway with Belardi Auto Racing. Then to top it all, being in a position to announce that we will remain together for the 2013 season was absolutely amazing.

A huge thank you goes out to my team, sponsors, INDYCAR and Firestone Indy Lights, Mazda Road to Indy, my family and friends, and of course all the fans that make racing what it is! I couldn’t have had such a great season without them. Now, roll on 2013!

Season in a nutshell

Made his first start in 2013 at Indianapolis with Younessi Racing. ... Finished in the top-five in his first start with Belardi Racing at Toronto. ... Started from 11th position and finished fifth at Baltimore, the biggest mover of the race.