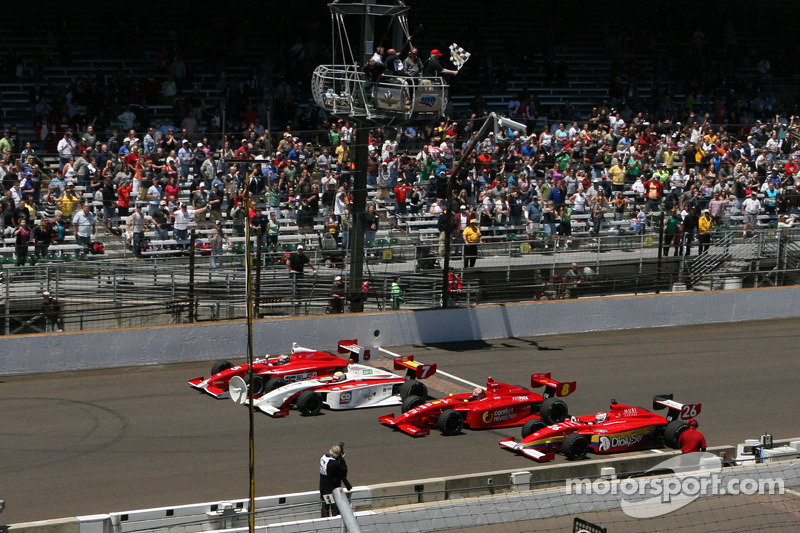 First Victory for the Irishman in the Firestone Indy Lights Series

Indianapolis, Ind. (May 24, 2013) – Peter Dempsey won his first Firestone Indy Lights race today at the historic Indianapolis Motor Speedway, taking the victory by a nail-biting .0026 second margin. The four-car-wide photo finish was the closest ever finish in the history of the iconic oval and is being touted as one of the most incredible finishes in the history of the series and the speedway. Today’s success also marks the first win for the Belardi Auto Racing team. 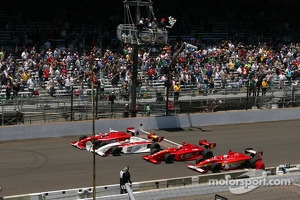 Dempsey started today’s race from the third spot on the grid and spent the majority of the 40-lap event keeping the No. 5 car on pace with the leaders while not making any drastic moves to get to the front too soon. In true “Dempsey-style”, as it is becoming known, the audacious driver went all out in a last lap showdown with Carlos Munoz, Sage Karam, and Gabby Chaves who had gone into a three-car-wide battle to the finish line. Dempsey saw an opportunity to make it a four-car-wide finish and slid into a just large enough spot near the outside wall. In the end, it was Dempsey who took the checkered flag first, claiming his maiden win in the series and truly showcasing his potential to be a long-time racing champion.

“I can’t believe we pulled it off and won the Firestone Freedom 100”, said Dempsey. “I have to give a huge thank you to my team and to Brian Belardi. I know how much effort everyone put in to win this race, and I’m glad I was the man to get the job done. This win is as much for Belardi Auto Racing as it is for me.

“That finish was incredible. I wasn’t sure if I had a shot at winning coming off of turn four, but when [Munoz, Karam, and Chaves] went three-wide, my car just snuck up right along beside them. They left me just enough room to squeeze past, and it was an amazing finish. I can’t believe it.”

Other notable achievements made by Dempsey today include being the first Irishman to win the Firestone Freedom 100, clocking in the fastest lap of the race with a speed of 191.770 mph (46.9312 seconds), and besting second place Indy 500 qualifier, Carlos Munoz, in the race. Dempsey also earned 50 points today, boosting him back up to second in the championship with 140 points.

“I have to thank all my sponsors, Liberty Engineering, OMP, Bell Helmets, Slick Locks, BT Indy, and G&G Inc.,” continued Dempsey. “To be able to win the Firestone Freedom 100 as my first Firestone Indy Lights race is unbelievable. I couldn’t think of a better place to do it than at Indianapolis Motor Speedway. This is a really special moment for me in my career, and I couldn’t think of a better team to get this win with than Belardi Auto Racing. I’m excited to move on to the next race now to try to continue our great form!”

Simon Pagenaud is fastest on the Carbuetion Day