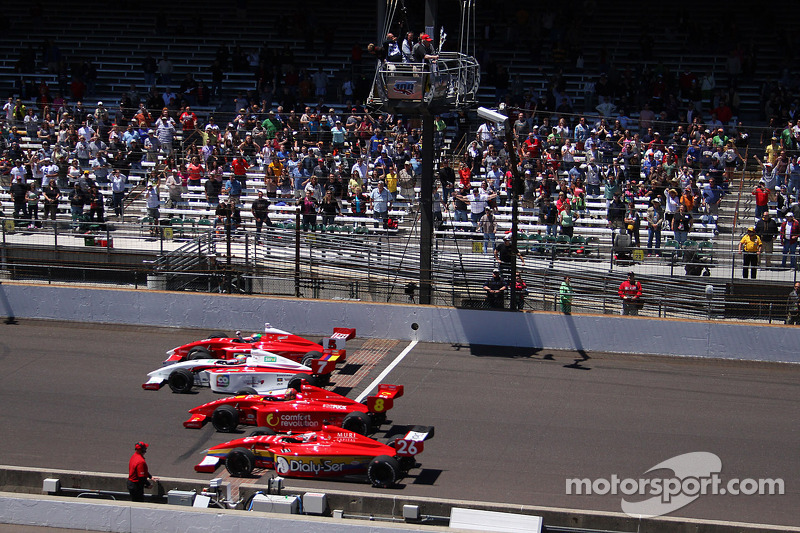 Peter Dempsey, driving his Belardi Auto Racing Indy Lights machine snuck up on the final lap to nip Gabby Chavez, Sage Karam and Carlos Munoz in a breathtaking four wide photo finish at the yard of bricks to win the 2013 Freedom 100 May 24 at the Indianapolis Motor Speedway.

Dempsey ran much of the race, which saw a single caution period, chasing the leaders of Munoz and Karam, but was able to pull alongside what appeared to be a three wide finish to beat Chavez to the line by 0.0026.

"I am at a loss for words," said Dempsey in victory lane. "What a finish, that's what the fans come to see. It's the perfect was to finish the Indy Lights race here at Indianapolis."

Chavez, who made his move exiting turn four on the final lap said he felt like crying after the finish.

"I am happy, but I feel like crying. If only the finish line was a couple of feet back," said Gabby Chavez. "I did everything I could until the last moment. Maybe it's not my year, but maybe another year in the future it will be mine."

Andretti Autosport driver Munoz, who will be starting Sunday's Indianapolis 500 from the second position, and Schmidt Peterson driver Karam led every lap of the race, except the one that counted the most.

The races only caution fell on lap two when Kyle O'Gara spun his car in turn four and hitting the outside wall head on ending the young Hoosier's race.

"I was coming through three and had a big run and went low going into four," said O'Gara. "I am disappointed in myself. We had a really good car, we were coming to the front. We will come back."

Two drivers made contact with the turn one wall damaging their cars suspension, as Jack Hawksworth made his contact on lap 14, and Chase Austin four laps later.

Hawksworth said a car in front of him pulled off line causing him to lose downforce exiting the turn.

"It's my fault, I take the blame. Sorry to the team. I don't understand what (Zach) Veach was doing moving from the outside to the inside of the track," said Hawksworth. "I had run high and into the wall. There was a lot of moving around going on. I had nowhere to go."