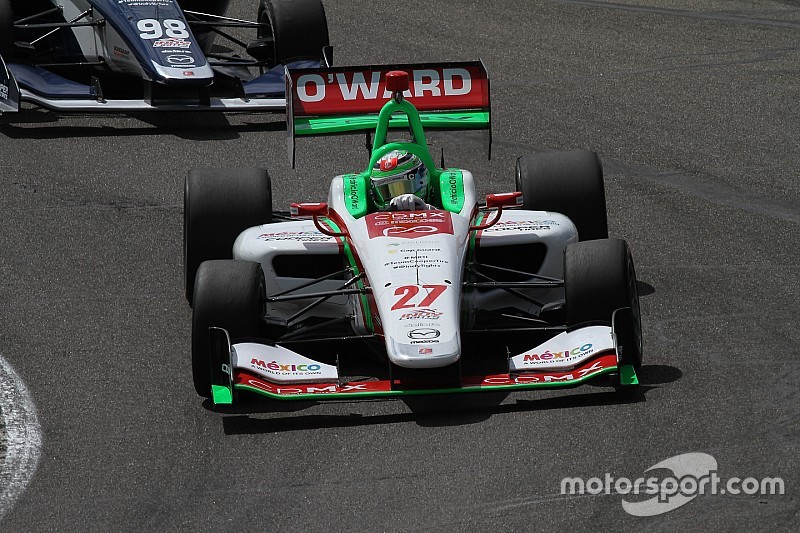 Polesitter O’Ward held onto the lead at the start with Herta falling in behind him despite a brave challenge from Aaron Teltiz’s Belardi Auto Racing machine. The second Belardi car, however, Santi Urrutia, blew through the Turn 1 chicane and Victor Franzoni’s Juncos Racing car got around them both.

Herta started applying serious pressure on O’Ward at the start of Lap 4, and got the job done into Turn 1 on the following lap. It was time for Herta to make a break, having used nine of his 20 push-to-pass boosts already. And maybe O’Ward was not in the mood for heroics, having shunted heavily in qualifying for Race 2. With a 25-point lead in the championship, his main duty was not to lose too many points to Herta, and therefore keep an eye on his mirrors for Franzoni getting too close.

Yet O’Ward actually started trimming tenths of a second from Herta’s lead, and at Turn 1 on Lap 14 he muscled down the inside of the Andretti Steinbrenner entry, forcing Herta to launch over the curbs to avoid heavier contact. There was no penalty and O’Ward was into the lead and it was a healthy 2.5sec.

That was it as far as the race for the lead was concerned, O’Ward eventually winning by 1.7sec over Herta with Franzoni and Urrutia a further 10 and 15sec behind respectively.

Lap 29 saw Gateway winner Norman slip past Telitz for fifth after a long, entertaining but clean battle, but they were some 18sec behind the victor.