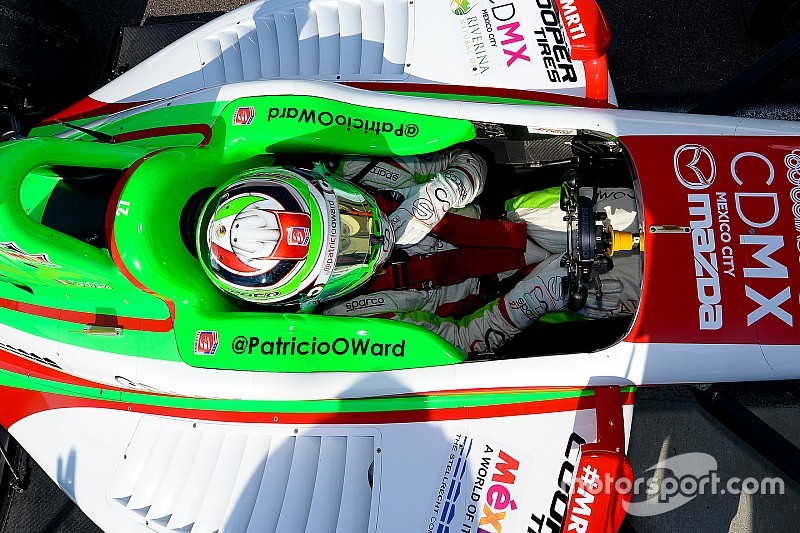 Polesitter Ryan Norman lost his advantage to Aaron Telitz’s Belardi Auto Racing car at the start, and going into the Turn 1 chicane things got worse for the Andretti Autosport driver. Victor Franzoni sent his Juncos Racing machine down the inside of Norman, but being half on the curb, he had no chance of stopping without everyone getting out of his way. That wasn’t going to happen, and instead he pushed Norman into the fast-starting Colton Herta (Andretti Steinbrenner Racing), on the outside, who then spun.

The fourth Andretti driver, Dalton Kellett, failed to see a way through the mess on the track and instead went into the runoff zone. He then accelerated hard to go between the advertising signboards… the width between which was narrower than his car. Much narrower. He emerged the other side, minus his front wing, and had to restart three laps down following repairs at the pits. At least he was better off than teammate Norman, who had to retire with crash damage. Herta got around to the pits, too, and was able to rejoin at the tail of the field.

However on the ninth lap, Urrutia passed Telitz for the lead at the end of the back straight, and O’Ward then further demoted Telitz along the front straight.

Some of Urrutia’s defensive maneuvers while retaining his lead against O’Ward’s attacks looked somewhat questionable but didn’t incur the wrath of race control. Finally at the start of Lap 18, O’Ward sold Urrutia the dummy, giving the impression he was going to try and make his ‘usual’ attempt around the outside. Urrutia moved right to protect the inside line, but O’Ward swept across to go even further to the right and outbraked the Belardi car into the chicane.

On the 26th of 35 laps, with O’Ward leading by well over four seconds, Telitz displaced Urrutia who then immediately came under pressure from Herta. Urrutia blew through the Turn 1 chicane, but showed no inclination to cede third to Herta when he emerged the other side as Race Control would surely have forced him to do. However, it became a moot point because Herta had been sent off the track by an attack from Franzoni. Both of them played around in the sand for a while before getting back on the asphalt. On Lap 32, Herta caught the Juncos car once more and sliced past into Turn 1. Franzoni tried to retaliate into Turn 10, and then again at Turn 1 but Herta held him off and even rubbed wheels briefly.

Herta then tried to catch Urrutia but came up half a second short. Meanwhile O’Ward claimed his ninth win by 7.8sec ahead of Telitz who in turn defeated Urrutia by 5.5sec.