The Firestone Indy Lights qualifying session ahead of Friday Carb Day’s Freedom 100 race fell victim to stormy weather in and around Speedway, Indiana, leaving competitors assigned to the grid according to this season’s owner points standings to date.

The result puts a pair of the four Sam Schmidt Motorsports entries on the front row. Bryan Clauson of Noblesville, Indiana, makes his series debut on pole in the No. 77 Dallara, adjacent teammate Josef Newgarden on the outside of the front row.

Clauson benefits from the fast start Hoosier Conor Daly made in the car’s three prior road course starts of the 2011 season. He has been fast-tracked to his debut by INDYCAR CEO Randy Bernard, who was keen to see the USAC veteran have an opportunity to race an Indy Lights car on an oval. 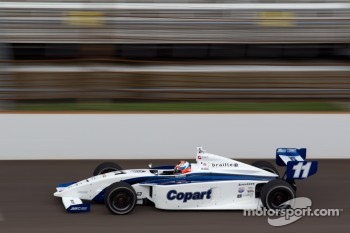 Stefan Wilson of Andretti Autosport will start the race in third, with Team Moore’s Victor Garcia in fourth place on the grid. Esteban Guerrieri, also of Sam Schmidt Motorsports, takes up the fifth starting spot in accordance with series rules that govern circumstances where qualifications must be deferred.

Rookie Chase Austin of Willy T. Ribbs Racing and Brandon Wagner of Davey Hamilton Racing have no points on the year to date. They will make up the ninth and final row of competitors for the green flag start scheduled for Noon on Friday May 27th at Indianapolis Motor Speedway.

Wilson was fastest in the truncated early morning practice session at Indy, turning a best speed of 189.958 mph out of the field of 18 racers entered into the event. Duarte Ferreira (188.993 mph) of Bryan Herta Motorsport and Newgarden (188.627 mph) followed during the 10-minute period the cars were able to navigate the 2.5-mile oval under green light conditions.

The track was officially closed at 2:50 PM EDT when officials determined there was insufficient time to dry a soggy racing surface that was peppered with rain throughout the day.

A final thirty-minute practice will take place on Friday morning at 9 a.m. EDT in the final tune-up for drivers and teams ahead of the race.

Mustang teams refuse to race in protest at Mid-Ohio - Video