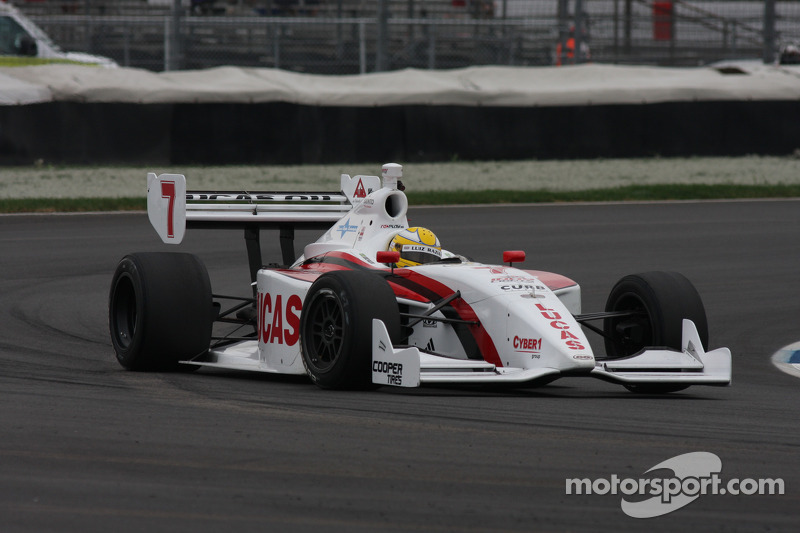 After winning on the road course, Luiz Razia hopes to conquer the oval after earning pole position for Freedom 100 at Indianapolis.

Speedway, Ind. - Brazilian Luiz Razia is building a strong affinity for the Indianapolis Motor Speedway. Two weeks after claiming the first pole and race win of his Indy Lights Presented by Cooper Tires career on the 2.439-mile road course, the veteran of GP2 Series competition in Europe returned to the fabled Brickyard - this time for his first experience on the 2.5-mile oval - and once again found himself on the top of the timing charts to win the Sunoco Pole Award for tomorrow's Freedom 100.

The Schmidt Peterson Motorsports with Curb-Agajanian team had been uncharacteristically quiet during the early stages of this season, but now seems to have rediscovered the form which has enabled it to win the last four Indy Lights championships in succession. Englishman Jack Harvey, who chased teammate Razia home to the checkered flag a couple of weeks ago, played second fiddle again this afternoon and will start alongside on the front row with an average speed of 186.573 mph in the #42 Racing Steps Foundation car.

Harvey and Razia also were the two fastest contenders in this morning's practice session, with Harvey fastest of all at 188.269 mph and Razia right behind at 188.233 mph.

Speeds, as expected, were slower this afternoon, with cars running one at a time for qualifying and therefore unable to take assistance of the considerable draft that ensues from circulating in nose-to-tail formation.

The Freedom 100, Round Seven of the Indy Lights Presented by Cooper Tires title-chase, will start at 12:30 p.m. EDT tomorrow, immediately following final practice for Sunday's 98th Indianapolis 500 as part of the Carb Day activities. The 40-lap, 100-mile race will be broadcast live on the NBC Sports Network and the IndyCar Radio Network.