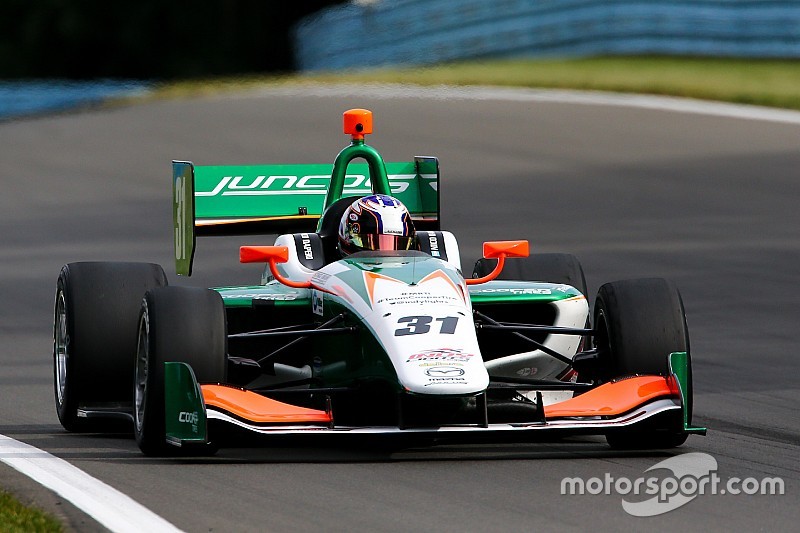 After conquering the Pro Mazda (now known as Indy Pro 2000) division last season, Rinus VeeKay is ready for his next challenge.

VeeKay picked up seven wins and six poles with the veteran team and becomes the first driver to be named to the championship-winning Indy Lights team for 2019.

The Hoofddorp, Netherlands native is ready to make the next step in Road to Indy ladder with the team.

“I really feel at home with Juncos Racing,” said VeeKay. “I think I can improve my performance and get better with this team and that is extremely important for my next goal - the IndyCar Series.

“It’s also great to see that the team work extremely hard for me. Last season they proved that, after a setback, they can come back better than ever before and they do everything they can to be successful.

VeeKay already knows how to win with the team and feels that will only help him in his move up to Indy Lights.

“(Winning) the 2015 and 2017 Indy Lights titles prove that,” he added. “I’m really looking forward to working together with (team owner) Ricardo (Juncos) and his team again and to being successful together. I would also like to thank Jumbo, La Place and KNAF Talent First for their ongoing support.”

Juncos Racing owner Ricardo Juncos is excited to make the move with his driver for next season as well.

“We are thrilled to have Rinus continue with our team for the 2019 Indy Lights season after an extremely successful year in Pro Mazda,” said Juncos. "Rinus has proved that he’s ready for the next level of the Road To Indy program through his work ethic on and off the track.”

The 2019 Indy Lights Championship kicks off March 8-10 with Rounds 1 and 2 on the streets of St. Petersburg, Fla.

Claman de Melo steps back to Indy Lights with Belardi

Megennis to race for Andretti Autosport in Indy Lights