On May 24, the 21-year-old from Colombia filled in another column with his first pole. And it comes in the biggest race of the season.

Yacaman, driving the No. 2 TMR-Tuvacol-Xtreme Coil Drilling car, posted a two-lap aggregate time of 1 minute, 35.9913 seconds (average speed of 187.517 mph) to claim the top spot for the Freedom 100 at the Indianapolis Motor Speedway on Miller Lite Carb Day (May 25).

I owe it all to my team.

"The team has done an amazing job," said Yacaman, who hasn't posted a top 10 in three previous races on the 2.5-mile oval. "Everything on that car had to be perfect to do what we just did. The car was great and the first lap was really fast (187.940 mph).

"To be honest, this kind of oval is more about the car, the team and the engineer than the driving really. I owe it all to my team."

It was the first pole in the Freedom 100 for Team Moore Racing, and its broke a three-year reign for a Sam Schmidt Motorsports car.

Victor Carbone posted a total time of 1:36.1712 (187.166 mph) in the No. 3 Mav TV/Nevoni/Sam Schmidt Motorsports with Curb-Agajanian car to set a season best and join Yacaman on the front row for the 40-lap race.

Carlos Munoz tied his season best of third in qualifying the No. 26 Team Dialy-Ser car for Andretti Autosport (187.009 mph), while Jorge Goncalvez -- the first of 19 qualifiers -- was fourth (186.794) in the No. 4 Belardi Auto Racing car to tie his career-best.

David Ostella qualified a career-best fifth in the No. 22 TMR-Global Precast-Xtreme Coil Drilling car, and Brandon Wagner earned his first top-10 starting spot in the Freedom 100 in the No. 17 Team E car. Alon Day in the No. 9 Belardi Auto Racing car will be on Row 4 with Emerson Newton-John in the No. 42 Fan Force United entry.

Series points leader Sebastian Saavedra, who will start 24th in the Indianapolis 500, qualified 10th in the No. 27 Team AFS car. Tristan Vautier, who sits second in the standings entering the race in the No. 77 Mazda Road to Indy/SSM with Curb-Agajanian car, will join Saavedra on Row 5.

Esteban Guerrieri's streak of top-five starts ended at 17 as he'll go off from Row 6 in the No. 11 Pistas Argentinas/SSM with Curb-Agajanian car. 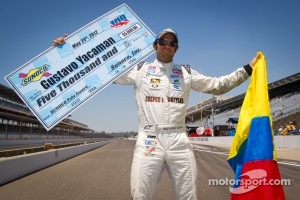 ANDERS KROHN (No. 28 Bryan Herta Autosport): "I think it was a solid run. Most important is that I think I have a great car for the race. In practice, I could run high, low or in the middle. I wish we were starting further up, but it's a long race. Last year I came from the back to the front twice, and we'll try to come up through the field tomorrow, too. The Bryan Herta Autosport guys have done a great job, and I feel really positive. This place is tricky. We'll treat it with the respect that it deserves but give it our all tomorrow and see what we've got. I want to thank Bryan Herta Autosport, I-Tec, Yellow Jacket and Premiere Glass & Mirror of Lancaster, Pa., for all their support."

BRANDON WAGNER (No. 17 Team E): "The run was good. I gave everything that the car had, and the car felt good. We put together two solid laps. On Race Day, if we start up front, obviously the plan is to get in that clean air as early as possible. If we start in back, we're going to have to re-evaluate our setup and try to find some clean air as soon as possible. The race is going to be obviously fast-paced and a lot of crazy fast moves three-wide at Indy, always. So it's going to be an exciting race."

TRISTAN VAUTIER (No. 77 Mazda Road to Indy/SSM w/Curb-Agajanian): "It was not fast enough, apparently. I just got to find more speed when I'm by myself. I'm going to focus on the race for tomorrow. But the car was feeling really good, but just not fast enough. We're going to work for tomorrow, and it should be good."

SEBASTIAN SAAVEDRA (No. 27 Team AFS): "It was not what I was expecting. I thought we could have quite a bit stronger pace. We have a very strong race car, which is important. I just wanted to start a little bit more in the front. We'll see what is going to happen, but for now we are going to keep working on the qualifying car." (Does it help you to be participant in both the Firestone Freedom 100 and the Indy 500?) "It is a big difference. At the end, it is just some mileage that we will gain. I'll just try to bring whatever I learn from the race (Friday) for the race on Sunday."

JORGE GONCALVEZ (No. 4 Belardi Auto Racing): "It was pretty good. I was the first guy to go out. Like always, I try to do the best that I can. I feel pretty good right now. We have a really fast car. Tomorrow, the race is going to be good."

CHASE AUSTIN (No. 87 Juncos Racing): "The driver didn't do so well. They gave me a pretty good car. My teammate has the same setup, so hopefully he can do a little more with it than what I did. I'm kind of disappointed in myself. These guys work really hard. We struggled in practice a little bit, but we'll be there for the race. I've never really had to deal with the wind like these cars have to. In my background, I never had to deal with shifting while I was racing and everything. I should have downshifted on the front straightaway to keep the RPMs where they needed to be. Like I said, kind of a rookie deal and, at the same time, driver error."

MIKE LARRISON (No. 19 Belardi Auto Racing): "It was pretty good. It's hard to see what the wind is going to do with it blowing around like this. You know, sometimes it calms down. I thought we had a little more speed than that, but we're in the field, and we'll just have to see what happens tomorrow."

ALON DAY (No. 9 Belardi Auto Racing): "I think our guys did a fantastic job. We've really been struggling with the engine the last few outings, so we changed the engine last-minute. It was a huge effort by the entire team, and I think we're going to be fast tomorrow. I'm excited for my first Freedom 100."

PETER DEMPSEY (No. 15 Younessi Racing): "I gave it everything we had. Not just myself, but the whole team at Younessi Racing has done everything possible to be here. I just think that the wind picked up there, to be fair. The first two cars ran low 48s, and then we're all back in the mid to high 48s. It's just unfortunate with the wind. In Turns 1 and 2, I was really turning against the wind there, and the car moves about. The problem is, you have to run fourth gear on one straight, and it's not worth the risk to have to change to fifth because it won't pull it coming out of Turn 4. But we are where we are."

JUAN PABLO GARCIA (No. 76 Freightliner Jeffrey Mark Motorsport): "I'm really happy to be qualifying here for my first time. I didn't have the opportunity to qualify last year. So I think it was a good experience right now. It was my first qualifying on an oval. I think everything that I'm doing right now is new to me. I'm taking everything I learn to go faster."

ARMAAN EBRAHIM (No. 24 Fan Force United/JK Tyres/AMG): "It was a clean run. The car was fine. I was completely flat right from the start. It was my first qualifying here. There is still some more work to do to find some more speed, and I'm sure that the team will really work hard on that, and we'll have something for tomorrow."

CARLOS MUNOZ (No. 26 Team Dialy-Ser): "I am quite happy. It was my first qualifying here. It seems that I did a good two laps. I was not sure about what gears to use my first time. Because of the wind, I didn't know what gear to put it in. I never before tried to go down one gear in the middle of the corners. But I'm quite happy. I was a little bit nervous for that. But, in the end, I think the end result was good. I'm happy with the car. And, I'll just focus on tomorrow for the race."

OLIVER WEBB (No. 7 Lucas Oil/Sam Schmidt Motorsports): "It was a bit average. I think we didn't quite do as well as we thought we could. We'll look at the data and see how it is, but I think we were just a little bit behind. We'll see how it goes tomorrow. The wind is really changing everyone's setup."

EMERSON NEWTON-JOHN (No. 42 Fan Force United): "I think I could have honestly done a little bit better line on my second lap. I think I left a little bit on the table, line-wise. But I think we'll still start top-eight, top-nine, which for the first time after 10 years that's not bad. The racer in me wants to be on pole, just thinking of the little things I could have done. But that's normal."

GUSTAVO YACAMAN (No. 2 TMR-Tuvacol-Xtreme Coil Drilling): "I'm really pleased. I think the first lap was really good. The second lap wasn't too bad, but I think we lost a little bit there. We'll see what happens. It's pretty windy. It's pretty windy out there, for sure. We have a really good race car. We think things are looking good."

VICTOR CARBONE (No. 3 Mav TV/Nevoni/SSM w/Curb Agajanian): "It was a good run. I felt that I extracted a lot of speed from the car, so we'll see."

ESTEBAN GUERRIERI (No. 11 Pistas Argentinas/SSM w/Curb Agajanian): "Actually, I am a bit disappointed. I'm not really quick in my two laps qualifying, same time in both laps. The wind was a bit tricky. But, obviously, Gustavo was in front of me, and he did a really quick run, so it is not an excuse. I should have tried to shift down on the short chute between (Turns) 3 and 4. That's it so far, but we'll be quick tomorrow, for sure."

DAVID OSTELLA (No. 22 TMR-Global Precast-Xtreme Coil Drilling): "I'm very pleased with the run. The team worked so hard today. The test that we had, we were one and two; it went really well. We were two and three in the practice this morning. I couldn't ask for anything more from them. They've been working so hard this whole week, just making sure the car was going to be prepped for today and for tomorrow. It was all about me just not putting it in the wall. I'm really pleased with starting fifth. I think we're going to have a really strong car. We were really quick in the practice with the race cars, so we'll see how it goes tomorrow."

J.V. HORTO (No. 86 Juncos Racing): "For sure, we have to work more on the car. We were pretty good in practice. We were first for almost the whole session. But the wind changed a lot since the morning, and I think our gears changed a little bit. We need to work again on the gears, and I'm just looking forward to the race."

Guerrieri comes from last to capture Freedom 100 thriller at Indy