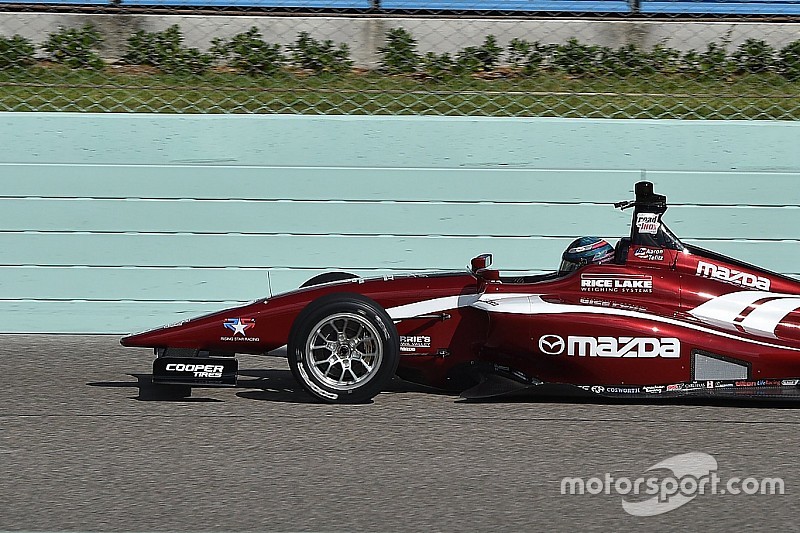 The Wisconsin native clocked a 1min07.584sec lap in qualifying for Race 1, an average speed of 95.880mph, despite bending his suspension brushing against the Turn 9 wall and obliging a quick pitstop.

Telitz was initially challenged most closely by his 2016 teammate and title rival Pato O’Ward. However, the Team Pelfrey driver – whose ride is so far guaranteed only for this weekend – shunted in the closing moments and had his two best laps deleted. He will start from ninth in the 15-car field.

Instead, Kyle Kaiser will start on the front row for Juncos Racing, with Juan Piedrahita third in the other Pelfrey entry.

Matheus Leist put Carlin Racing into fourth, ahead of Colton Herta, whose Andretti Steinbrenner Racing machine was fastest of the Andretti Autosport contingent.

Santiago Urrutia in the second Belardi car was half a second off his pole-winning teammate and will start sixth ahead of Neil Alberico (Carlin) and Shelby Blackstock (Belardi).

Aside from O’Ward’s faux pas, the session was stopped twice – once for Andretti Autosport’s Nico Jamin stalling down an escape road and then teammate Ryan Norman clouting the wall in Turn 10.