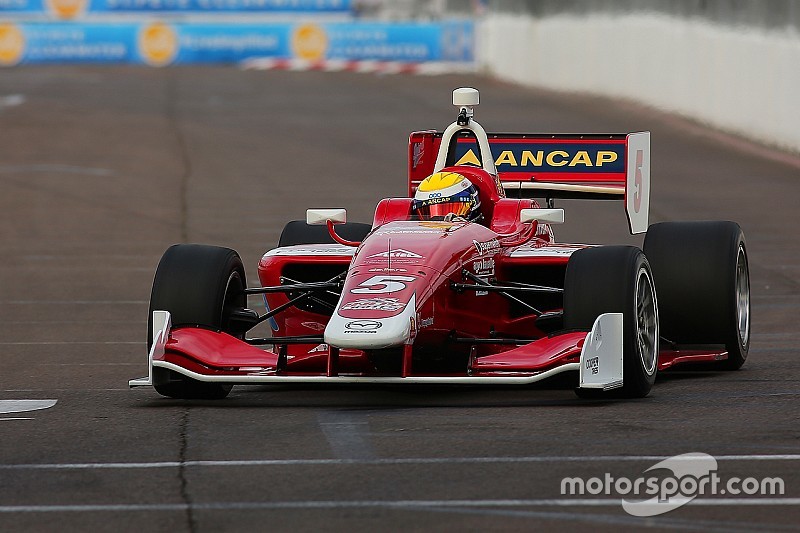 Santi Urrutia, who finished runner-up in the Indy Lights championship for the last two years, captured a surprise win at St. Petersburg when Colton Herta shunted and then Pato O’Ward threw away an easy win.

Herta in the Andretti Steinbrenner Racing entry took the lead at the start, sweeping around the outside of his pole-sitting teammate and yesterday’s winner Pato O’Ward. However, behind them Aaron Telitz’s Belardi Auto Racing entry – a car borrowed from ArmsUp Motorsport and Carlin after his shunt in qualifying yesterday – was sent into the wall by Victor Franzoni’s Juncos Racing car. Out came the yellows and the wreckers to salvage Telitz’s car, while Franzoni went to the pits for a new nose/front-wing.

That left the other Belardi car of Santi Urrutia and Team Pelfrey’s Shelby Blackstock next in line behind the Andretti duo, with Dalton Kellett (Andretti) and Neil Alberico (Pelfrey) in fifth and sixth.

At the restart, O’Ward clung onto Herta through Turns 1 and 2, ceded at Turn 3, then came right back down the inside at Turn 4. Further back, Alberico, Ryan Norman (Andretti) and recovering Franzoni passed Kellett.

Herta initially held onto O’Ward but by Lap 10 the gap was out to 1.8sec, at which point Herta smacked hard into the wall on the exit of Turn 8. His race was emphatically over.

The Lap 14 restart was civilized enough, with O’Ward easing clear of Urrutia and Blackstock, then rapidly checking out. The battle of interest was between Alberico, Norman and Franzoni, until the latter started drifting gently backward, as Alberico closed on teammate Blackstock.

O’Ward’s lead after 32 laps was over six seconds but he had just set fastest lap when he skated straight on at Turn 4. By the time he’d turned the car around and got going again, the entire field had gone past and he was in seventh.

Urrutia thus held a lead of 11sec over Blackstock, whose mirrors were now full of his teammate’s Alberico nosecone, with Norman close behind. Could he salvage at least a podium for the mortified Andretti Autosport team?

He could! On the last lap, Norman ran into the back of Alberico exiting Turn 1, bending his front wing, but also slicing Alberico’s rear tire, allowing not only Norman to nip through for third, but also Franzoni to salvage fourth place.