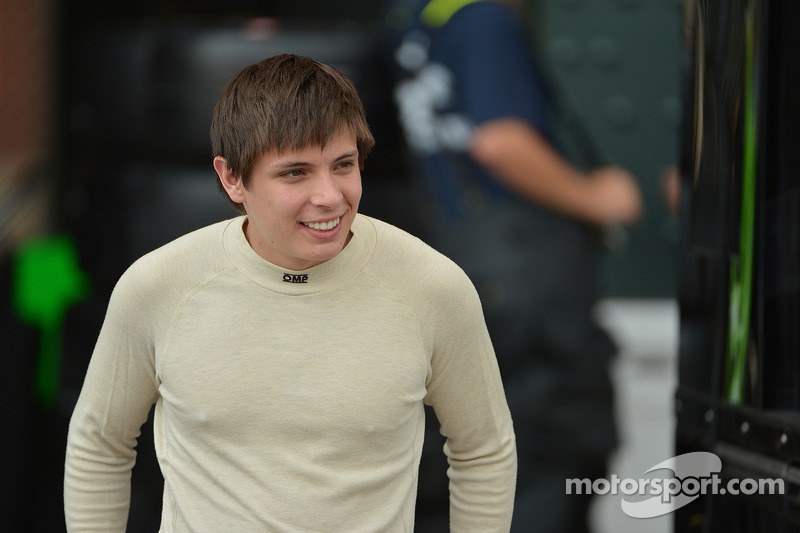 Colombian-American Gabby Chaves made amends for a heartbreaking second-place finish 12 months ago by scoring a sensational last-gasp victory in today's Freedom 100, the jewel in the Indy Lights Presented by Cooper Tires crown, at the Indianapolis Motor Speedway. Third-generation racer Matthew Brabham led 28 of the 40 laps around the fabled 2.5-mile oval for Andretti Autosport but had to be content with second place, by just 0.0050 seconds - the third closest margin in Indy Lights history.

Chaves' third win of the season for Brownsburg, Ind.-based Belardi Auto Racing vaulted him into the championship points lead, by a scant one point, over erstwhile leader Zach Veach who finished third - a mere 0.1446 seconds behind the winner - for Andretti Autosport.

"I'm speechless," he said. "It hasn't really sunk in yet. I feel like I'm going to wake up in the next minute, discover it's a dream and I have to go do it all over again! I'm slowly starting to understand what just happened. Early in the race, I was just trying to get myself into a position where I could have a good shot at it on the last lap. Once I was in the top three, I knew I didn't have to make any moves. The only to make a move for second was because P4 was getting pretty racy with me - the best way to stay in the top three is to have a cushion behind you. Zach put in a good counter attack on me for second, so I lost a spot. I tried to get it back in Turn One on the last lap and got a little loose but I didn't lose much speed; I kept my foot in it. I was able to get a good run on the back straight and get around Zach on the outside in Turn Three and got a good run around the outside of Matt in Turn Four. I drafted on him a bit onto the front straight and managed to get it by just a little bit.

"My car wasn't spot-on driving in the low line behind another car, and I wasn't too comfortable driving the higher line, even in clear air. But being here last year and going through all that, I know the car is going to be able to do it, even if it doesn't really feel safe. I knew the car could take it. On the last lap, you're committed to whatever happens; you're just going to keep your foot in it. You can't lift. I thought we'd won, but the pylon still had the #83 in first. It wasn't until I exited Turn One and everyone on the team came on the radio, screaming and yelling, and I was pretty sure what the message was!"

In 2013, Chaves used the prodigious draft on the outside line to draw alongside previous leader Carlos Munoz on the exit of Turn Four and looked set for the victory until Irishman Peter Dempsey took an even higher line and edged Chaves to the line by six inches. This time around, driving the very same Belardi car, Chaves pulled the identical move on Brabham to snatch the victory by perhaps a foot. The winning maneuver earned Chaves the RePlay XD Move of the Race Award.

The 12th Annual Freedom 100 had been building up toward the photo-finish virtually all the way through a close-fought race held in perfect weather conditions in front of a big Coors Light Carb Day crowd. Polesitter Luiz Razia led from the start for Schmidt Peterson Motorsports with Curb-Agajanian, but it didn't take long for Brabham, who started third, to move his way forward and take over the point. The lead changed hands regularly as a pack of nine cars circulated in tight formation at speeds close to 200 mph.

On Lap 15, the action was interrupted by a ferocious accident when Chase Austin lost control of Belardi Auto Racing's #0 UNAIDS/Starting Grid car in Turn One and made heavy contact with the inside retaining wall. The Holmatro Safety Team was on-hand almost before the badly damaged car came to rest on the Short Chute between Turns One and Two. Austin, making his sixth Indy Lights start but his first since last year's Freedom 100, was extracted from the wreckage and evaluated at the Infield Care Center before being transported, awake and alert, to Methodist Hospital with a fractured left wrist.

Chaves served notice of his intentions by vaulting from third to first soon after the restart, on Lap 24, only to slip from first to third a handful of laps later following a thrilling moment in Turn One when Chaves, Veach and Brabham were virtually three abreast.

Andretti teammates Brabham and Veach led Chaves when the white flag flew at the end of Lap 39, but it was Chaves who emerged in front when it mattered most to claim the biggest win of his career to date. Brabham's consolation were an additional two bonus points for fastest lap (47.5653 seconds, 189.214 mph) and leading the most laps.

Indy Lights Presented by Cooper Tires Round Eight will take place at Pocono International Raceway, Pa., also in supported of the Verizon IndyCar Series on July 5.