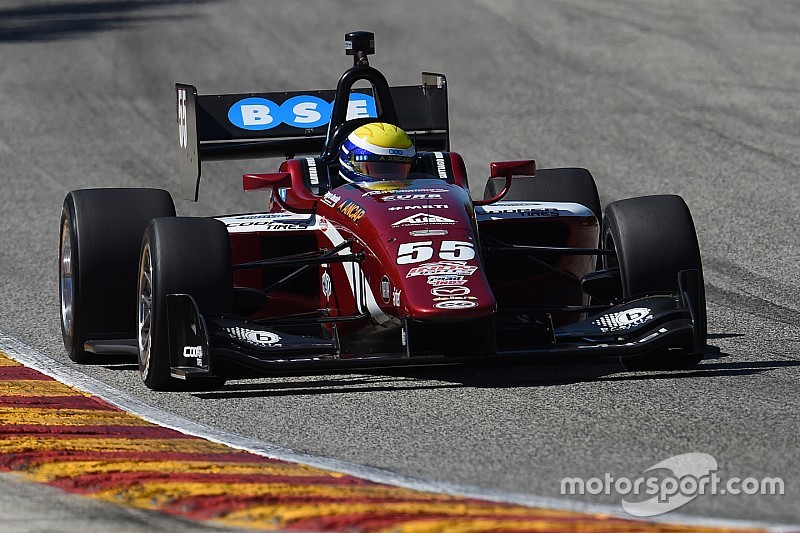 Santiago Urrutia led a Schmidt Peterson Motorsports 1-2 after the pair nursed their wet tires at a rapidly drying Road America track, while the Carlin teammates collided and Dean Stoneman lost a lap to a puncture.

SPM left the Elkhart Lake course yesterday after Race 1 with ninth and 10th places – and a boatload of criticism for Andretti Autosport driver Stoneman, who they felt had run Urrutia off the road (he didn’t) and run Andre Negrao off the road (he did and was penalized for it).

Today, Sam’s boys took full advantage of some over-aggressive driving from their rivals to clinch the top two steps of the podium, ahead of yesterday’s winner Zach Veach of Belardi Auto Racing.

Behind them were Juncos Racing’s Zachary Claman DeMelo and Kyle Kaiser, who were separated by Andretti Autosport’s Shelby Blackstock.

Blackstock’s teammate Stoneman was the talk of the race, outfumbling Carlin Racing’s Ed Jones for the lead but suffering a puncture. Stoneman trundled back to the pits, switched to slicks and then charged hard, to set fastest lap and gain an unrepresentative ninth place.

After just one warm-up lap of the 4.048-mile road course, the 14 cars were released on wet tires on a wet track, with polesitter Jones taking the lead and Veach moving past Urrutia take second. Veach tried to take the lead at Turn 3 but didn’t have the momentum.

Behind, Negrao ran third while Stoneman tried to take Urrutia into Turn 5. Although that didn’t work, Urrutia still lost momentum so that over the next two corners, he fell behind both Stoneman and Serralles, who tried to take a look around Stoneman at Turn 7.

At the end of that opening lap, Jones led Veach, Negrao, Stoneman, Serralles, Urrutia, Kaiser and de Melo, but on the following lap, Stoneman was past Negrao and into third, albeit 1.5sec behind Veach, who in turn was 0.7sec behind leader Jones.

By Lap 4, Serralles was moving in on Negrao for fourth, but a more dramatic shift came a lap later when Veach spun exiting Turn 5 and dropped to sixth.

On the Lap 7 restart, Stoneman could expect no favors from Jones when he took a cursory look around the outside of Turn 3, but the Andretti driver had the momentum and drafted past on the run down to Turn 5. However, he left just enough of a gap inside, allowing Jones to retake the lead.

Stoneman steered wide, gained superior traction and drew alongside Jones up the hill to Turn 6. As the Carlin driver squeezed Stoneman onto the grass, Stoneman kept his foot in and muscled alongside and ahead at the apex.

Jones slid wide, and on the exit Serralles ran into the back of his teammate, smashing Jones’ rear wing, and his own front wing as the car bounced high in the air. Afterward, Serralles said he felt Stoneman brake-checked Jones. The result was another full-course caution to clear debris.

If the Carlin team gained any satisfaction despite having two damaged cars on pitlane, it was that Stoneman did not escape unscathed, as his right-front tire had deflated, so as he led the field to the green flag on Lap 9, he was swallowed up by the chasing pack and had to do a complete lap with a puncture before he could pit – and take on slicks. Up front, Urrutia led Negrao, Veach, Blackstock, DeMelo, Grist, Kaiser, French, Piedrahita and third Carlin car, Neil Alberico.

Stoneman would rejoin 11th and a lap down, behind the fourth- and fifth-place cars but rapidly proved slicks were the tires to have. Over the remaining eight laps, he set lap times up to 12sec faster than leaders, who were all desperately seeking wet patches of track to cool their overheating wet tires. However, without the aid of a third full-course yellow, Stoneman could make little progress up the order, and finished ninth and with fastest lap.

Up front, Urrutia did a commendable job of nannying his Cooper wets while also easing out of range of teammate Negrao, eventually crossing the line with an 8.15sec advantage. Negrao, meanwhile, was five seconds ahead of Veach’s Belardi machine which in turn was a full 12sec ahead of DeMelo, who passed Blackstock for fourth on lap 18 of the 20-lap race. 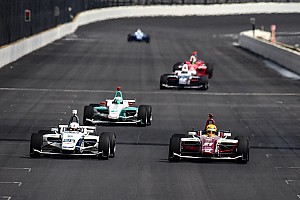