FONTANA, Calif. -- Esteban Guerrieri overtook Tristan Vautier in Turn 1 of Lap 39 to move into third place in the Auto Club Speedway Foundation 100, but he needed to gain two additional positions in the final 11 laps on the 2-mile oval to wrest the Firestone Indy Lights championship from his Sam Schmidt Motorsports teammate.

That didn't occur as Carlos Munoz of Andretti Autosport led David Ostella of Team Moore Racing across the finish line by 0.6344 of a second for his second victory of the season. Guerrieri was 3.3 seconds off the pace. 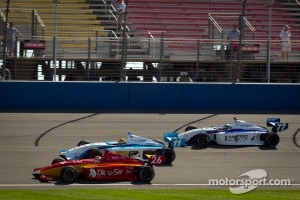 So, while Guerrieri earned his ninth podium finish in 12 races, he fell eight points shy of the title as Vautier followed in fourth place. Guerrieri started third and Vautier started fifth in the title-deciding race.

"There wasn't much we could do from mid-race on," said Guerrieri, who was driving the No. 11 Pistas Argentinas/SSM with Curb-Agajanian car. "From the beginning we tried to pace ourselves but they had more than us. I tried to go flat out and that's all I could do."

Vautier, who celebrated his 23rd birthday on Aug. 22, has won consecutive championships -- Star Mazda and Firestone Indy Lights. He accomplished the feat this season against a stout lineup of competitors by accumulating four victories, 10 total top-five finishes and five Sunoco Pole Awards.

"I came over to the USA because of the Mazda Road to Indy," Vautier said. "I was struggling getting up the ladder in Europe and I knew that if I was coming over here and was able to win the Star Mazda championship I would be able to get into the bigger cars. That was the goal. I won the championship last year.

Vautier led Guerrieri, who was the series championship runner-up for the second year in a row (in 2011 to Josef Newgarden, now driving for Sarah Fisher Hartman Racing in the IZOD IndyCar Series), by 11 points entering the season finale. It is the third consecutive driver championship for Sam Schmidt Motorsports and sixth since 2004.

"My last race of the season is a win so I'm really happy with the Andretti team giving me a great car," said Munoz, 20, of Colombia. "For being my rookie year, I have my second win, and an oval win (his first was on the Edmonton airport circuit from the pole).

"That was amazing," said Ostella, who earned his fifth top-five finish of the season. "The track definitely gripped up a lot. I expected the tires to be a big issue but our set-up was just amazing. The guys did an amazing job. The car was great the whole time. I'm so happy for the team; we definitely deserved this. To have this happen on the last race, just amazing."