Also on June 15, Tristan Vautier, who earlier in the day earned the pole position for the Firestone Indy Lights 100, held off Sebastian Saavedra of Team AFS by 0.3370 of a second to provide Sam Schmidt Motorsports its 50th victory in the series. The team has been in the series since its inception in 2002. 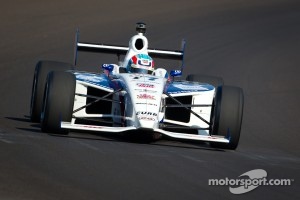 By virtue of the three bonus points for the pole (1) and leading the most laps (2), Vautier leaped Guerrieri for the points lead 241-238 heading to the Iowa Speedway next week.

Saavedra, who overtook Victor Carbone on the first lap for second, hung with Vautier following two restarts and closed on the final laps but couldn't get a run to make the pass.

David Ostella, driving the No. 22 TMR-Global Precast-Xtreme Coil Drilling car, overtook Carlos Munoz in the No. 26 Team Dialy-Ser car for Andretti Autosport on the final lap for fourth. Victor Carbone finished sixth in the No. 3 Mav TV/Nevoni/SSM with Curb-Agajanian entry.

TRISTAN VAUTIER (No. 77 Mazda Road to Indy/SSM w/Curb-Agajanian, winner Firestone Indy Lights 100): "We put the car on the ground this morning and it felt amazing after two runs we got it tuned, and we were great all day. It was a great race, we were in control. The end was a little harder with the lapped traffic, the lapped traffic to manage, but awesome day, awesome job from the team. I see my teammate Esteban made it back to the podium so great job from him from sixth and a tough day, so we have two cars on the podium. I think it's the 50th with for Schmidt. I didn't get the 50th pole, I was kind of pissed that my pole this morning was the 51st, but real happy to get the 50th win. What an awesome team. Really thankful to Mazda for putting me in the car this year and the Mazda Road to Indy, Sparco, PitFit, all my sponsors who follows me in France and here and helps me out. Really a great day."

SEBASTIAN SAAVEDRA (No. 27 Team AFS, finished second): "To be honest, it was very close. For those last 10 laps I was pushing, giving it everything I got. The 27 car handled amazing with the Firestone Firehawk tires. I guess I'm pleased. I'm not happy because I wanted that first place but it's very important points for the championship."

ESTEBAN GUERRIERI (No. 11 Pistas Argentinas/SSM w/Curb Agajanian, finished third): "It was a tough one today. We were struggling in the beginning to find the rear grip. Then we just worked to find our pace. We had a bit of understeer but it wasn't quite working. We never found the balance. We came into the race with a setup that we knew and tried to make it so I wouldn't push so much in the beginning and save the tires a little bit. To come in third makes a bad day not so bad. We have to keep fighting for the championship. I'm pleased, not completely happy, but pleased."

DAVID OSTELLA (No. 22 TMR-Global Precast-Xtreme Coil Drilling, finished fourth): "I got a clean start, although it was quicker than I expected. I had to focus on taking care of the tires the whole race. I made a mistake and brushed the wall a bit early on which allowed Alon Day to pass me. The last 20 laps I was flying out there. It is so good to finish a race after coming off of two races where I didn't finish. Being in the top five is amazing and I can't take the team enough. They did a wicked job. I've been sick all day and fallen asleep between every session. The team worked so hard today though to give me a good car. It was an amazing race. It's all about timing a pass here. If you miss the timing on a pass once it takes you about three laps to get it back. The car was so good that I could run the high line in turns one and two and the low line in turns three and four. The car was just amazing for passing. I actually touched tires with Carbone which scared me a little but the car was still perfect."

CARLOS MUÑOZ (No. 26 Team Dialy-Ser, finished fifth): "In the first half of the race I was really good. I was really close to Sebastien (Saavedra) for more than half of the race, I thought I was quicker than him. I just wasn't getting the clean air, there was too much understeer. After the second yellow flag I was getting so much more understeer, I used all of my tools, but I just couldn't steer the car, I lost my front tires. Also on the last lap, I was trying to go around a lapped car but he really wasn't playing fair...that caused David (Ostella) to go around me on the last lap. But we got a fifth place, we are going for the championship, so okay for my first race here."

OLIVER WEBB (No. 7 Lucas Oil/Sam Schmidt Motorsports): "The race was disappointing. When I was running by myself, we were fine. I had OK times compared to the rest of the field then, but I couldn't really follow anyone. I was struggling when I was behind people and my restart was pretty poor. I think the restarts really hurt me and I just couldn't catch back up. "

VICTOR CARBONE: (No. 3 Mav TV/Nevoni/SSM w/Curb-Agajanian): "I didn't get a good start. I dropped to third and then fourth. From mid-race onwards I was battling with the car. I couldn't keep up with the pace of the other cars because I was battling with my own car. I couldn't maintain the consistency that we were looking for. You have to adapt to the life of your tires here so it's a really hard place to race. I'm looking forward to going to Iowa and turning things around next week."

BRYAN CLAUSON (No. 24 Fan Force United): "We needed the race to be 150 laps, because I was starting to catch those guys. I had to wear down the front tires to get the balance back, and the change we made on our stop really helped. I was feeling great for the last 20 laps, and I know I was turning some of the best laps out there, so it seems like a pretty good result for my first time out with these guys. This was a great test session for Iowa, but not the birthday present I wanted. Either way, I'm really looking forward to picking up where we left off next week."

JUAN PABLO GARCIA (No. 76 Freightliner Jeffrey Mark Motorsport): "I just finished my second oval race and I was much more confident driving today but there is still a lot to improve on. The car was fast and felt great; it also helped that the race was mostly green. I was happy with the race but there is still a lot of work to do in order to prepare for next weekend. As always, the whole Jeffrey Mark Motorsport crew did a great job. I am ready to back in the car in Iowa next week."

ALON DAY (No. 9 Belardi Auto Racing): "It was a nice race and my second oval racing experience ever. Unfortunately we started from the back so that hurt us, of course. We had a great race pace and managed to move up in the field. If there were just 10 more laps the outcome would have been completely different, but I'm happy.

JORGE GONCALVEZ (No. 4 Belardi Auto Racing): "It was a good finish to the race. I'm happy...we finished ninth. It's OK. It's good for the championship. The team and I will keep working, and the next race will be better for sure."