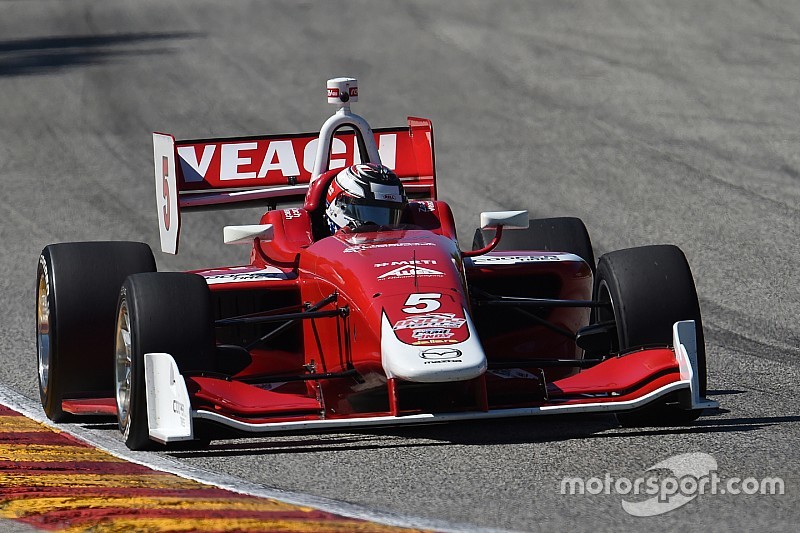 Zach Veach left all the dramas behind him, racing his Belardi Auto Racing machine to Indy Lights victory at Road America, but bad-tempered racing behind him affected the top three in the championship.

At the start, polesitter Veach jumped into an immediate lead, but championship leader Ed Jones drove his Carlin Racing machine around the outside of front-row starter Santiago Urrutia to grab second place, with Dean Stoneman (Andretti Autosport) moving past the other Schmidt Peterson Motorsports car of Andre Negrao to take fourth.

Stoneman then passed Urrutia, too, but when the SPM driver tried to retaliate on the outside under braking for Turn 5, he ran out of road and dropped to ninth.

Urrutia started his comeback drive, passing De Melo for eighth on the next lap, as Stoneman got around Jones at Turn 13, but Jones reclaimed second around the outside of Turn 1 on Lap 3.

That caused Stoneman to lose momentum, making him apparently easy meat for Negrao who got almost fully alongside the Andretti machine on the outside of Turn 5 before finding himself ushered off the track. That caused Race Control to impose a five-second penalty on Stoneman, to be added at the end of the race, and so the winner of the previous two races had to charge now. Two laps later, he got around Jones, just before a full-course caution flew for his teammate Dalton Kellett spinning into a tire barrier right after being passed by Pelfrey’s Lights debutant Garett Grist.

That wasn’t going to help Stoneman’s cause, but what did help was that when the green flag flew again on lap 10, the Carlin cars held each other up as Serralles passed Jones for third place. Behind, Urrutia nudged Piedrahita  into a spin heading into Turn 5, and spun the Pelfrey car around. The result was that he too incurred a 5sec penalty.

On track, he stayed in the fight, passing Kyle Kaiser into T5 on lap 12, but having crossed the line in fifth, the penalty saw him drop to ninth place. Stoneman, meanwhile, effectively eradicated his penalty by pulling out 5.8sec over Serralles in the second half of the 20-lap race, thereby keeping hold of second place.

Jones came home fourth, just keeping ahead of the charging De Melo who motored past Negrao for sixth on the penultimate lap, which of course became fifth once Urrutia’s penalty was imposed.

Grist and French were classified seventh and eighth ahead of Urrutia and Negrao, who fell to 10th on the final lap.

The second Lights race starts at 8.45am Central Time tomorrow.