Askew dominates DD2, but there are surprises elsewhere 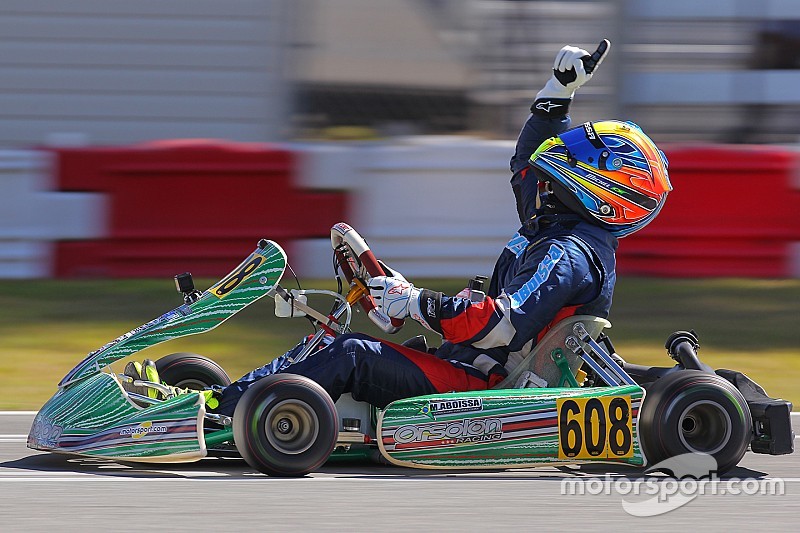 Round 2 of Rotax Max in the Sofina Foods Florida Winter Tour presented FIKSE Wheels delivered some surprises and a couple of predictable results. Cody Schindel reports from the Ocala Gran Prix circuit.

There was just no stopping Oliver Askew this weekend in Rotax DD2 as the Florida driver went flag-to-flag for victory on Sunday. That completed a dominant weekend for the PSL Karting ace, where he topped every single session.

Luke Chudleigh followed Askew through corner one after starting P3 and held the second position for two laps before his Maranello teammate Robert Wickens worked by.

From there, the leaders spread out until Chudleigh encountered a technical issue and ultimately retired, allowing fellow Canadian Marco Signoretti by for the final step on the podium. Michael McCarthy and Sebastian Herrera Martine completed the top-five, more than half a track behind.

In the Rotax DD2 Masters race within the race, Luis Schiavo overtook both Christian Cornejo and Christophe Adams to score the win.

Rotax Senior finally delivered the action everyone was expecting on Sunday but only after polesitter Kyle Kirkwood retired on lap three with an engine failure. Austin Garrison inherited the lead until Jordon Lennox slid by with Trenton Estep and Zachary Claman DeMelo all involved in the battle for P1. Contact between Lennox and Garrison slowed the group up entering the Tree Turn and more contact, this time including Estep, allowed DeMelo to slide by all three and take the lead at halfway.

Regrouping, Lennox hunted down DeMelo as the laps ticked by until the two came together, allowing Estep to sneak through and gain a large advantage. The action continued right to the finish but Estep passed the checkers first, followed by Garrison and Darren Keane. Lennox and DeMelo came together on the final lap, ending Lennox’s race.

Perhaps predictably, the post-race air was thick with penalties and protests. First, Keane was removed for a technical violation. Then Estep was assessed a penalty, only for it to be overturned. After a lengthy discussion with the race stewards, the final results saw rookie Senior Estep on top, Garrison second and South African Jordan Sherratt third.

Ocala sweep for Ramirez in Junior

Mathias Ramirez prevailed as the king of Junior competition in Ocala, securing his second FWT victory in as many weekends on Sunday with a 4.7sec victory. Ramirez jumped out front at the sight of the green flag and left his rivals duking it out behind. Matthew Latifi held the second position early but came under pressure from Ryan MacDermid and Nicholas d’Orlando. With great pace, d’Orlando moved by both drivers by Lap 6 and broke free from the group. The race for third came down to the wire with Dylan Tavella taking the position at the finish just ahead of Aidan Keel and Kilian Meyer.

Just no stopping Gonzalez in Mini-Max

A second Ocala Gran Prix team driver completed a perfect weekend on Sunday as Tyler Gonzalez drove unchallenged in the Mini-Max Final. His superb effort this weekend vaulted him right back into the championship hunt. Last weekend’s winner Matheus Morgatto settled for second in the Final, keeping Gonzalez on his toes but never getting close enough to make a move. Completing the podium for the second race in a row was Austin Torgerson who used a final corner crossover move to pass Jeremy Fairbairn. Arias Duekmedjian was fifth.

Pierson wins his second in Micro-Max

Two drivers broke free in the Micro-Max race as Josh Pierson and James Egozi parted from the pack after an opening lap spin ended Justin Arseneau’s shot at a podium. Back and forth the lead duo swapped position until the final lap. Holding on through the first seven corners, Egozi looked like he had the race under control only for Pierson to dive deep to the inside of the final corner and snag the position and the victory away, claiming his second FWT win of the season.

Flag-to-flag for Aboissa in Masters

It was a simple drive for Brazilian pilot Michel Aboissa in Rotax Max Masters as he stamped his authority on Sunday’s Final. After disposing of his competitors in the early going, Aboissa was on cruise control in the 30-lap main event, taking the victory in style. A comeback drive for Scott Roberts earned him runner-up position after falling to fourth on the start. Christophe Adams was third.

The third and final round of the 2016 Sofina Foods Florida Winter Tour presented by FIKSE Wheels takes place in a few weeks time at Palm Beach Karting in West Palm Beach, Florida. Champions will be crowned in both the ROK Cup and Rotax Max Challenge competitions.