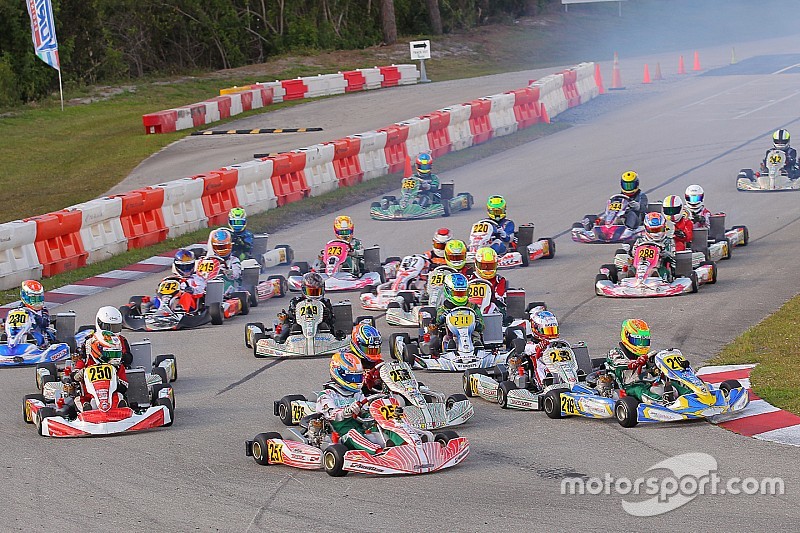 Qualifying is complete in West Palm Beach as racing is underway at the final round of the Sofina Foods Florida Winter Tour ROK Cup presented by FIKSE Wheels. Cody Schindel reports.

Kyle Kirkwood narrowed the gap to his championship rival Ryan Norberg to only six points when he secured pole position and the five bonus points that go along with it. Kirkwood was more than 0.3sec quicker than nearest opponent Alain Siseli. Championship hopefuls Norberg, Olin Galli and Zach Holden rounded out the top-five.

Norberg challenged in the first heat Friday afternoon but Kirkwood was still able to hold on and take the heat win with Roman DeAngelis third, Robby Seward fourth and Holden recovering back to fifth after an opening lap incident that saw him soar over the top of Sisdeli in Turn 1.

In ROK Shifter Austin Garrison is in control, leading the way on Friday in both qualifying and the heat race. A small hiccup saw Garrison overshoot his entry into Turn 1 a couple laps into the heat race, but he recovered and overtook Danny Formal before the 12-lap run was complete.

Formal, Collin Daly, who has made the switch to the DR Kart this weekend, Oliver Askew and AJ Myers rounded out the top-five. Carlos Fonseca is leading the ROK Shifter Masters drivers, running mid-pack with the ROK Shifter Senior drivers.

It appeared many of the ROK Junior drivers didn’t know which day of the week it was as plenty of excitement unfolded in Heat 1, making it appear like it was Sunday’s Final. Canadian drivers Ryan MacDermid, Michael d’Orlando and Matthew Latifi led the way in qualifying with Latifi emerging with the heat win after the melee.

Championship leader Mathias Ramirez didn’t even complete one lap of the heat race after becoming collateral damage in a high speed crash on the main straight. A few laps later, Nicholas d’Orlando was one of many drivers involved in another incident on the same straightaway as drivers have found trouble with a bump on the exit of the corner. Finally, Michael d’Orlando was penalized for jumping the start, surrendering his fourth place finish behind Latifi, Jett Noland and MacDermid, to wind up 16th.

Reece Gold snagged pole in Mini ROK but it was Jak Crawford who showed he isn’t out of the race for the championship, qualifying fifth and winning the opening heat race on Friday while his championship rivals faltered. Matheus Morgatto and Derek Carmenate qualified sixth and seventh respectively, but action in the heat races saw them fall to ninth and 11th at the finish line.

Two drivers broke free in Micro ROK on Friday as championship leader Oliver Denny was challenged by Jeremy Fletcher. They battled hard in the heat race after qualifying first and third, ultimately drag racing to the finish line with Fletcher crossing a mere 0.019 seconds ahead. Anderson Leonard was third while Freddie Slater and Alex Popow completed the heat race top five.

Finally, in the Masters category this weekend, Anthony Honeywell qualified on pole, but a hiccup in the heat race saw him surrender the lead to Daniel Rieger on the last lap.

The action resumes on Saturday at Palm Beach Karting as all classes will complete two more heat races and a PreFinal to set the grid for Championship Sunday.

Don’t forget, you can watch the Sofina Foods Florida Winter Tour presented by FIKSE Wheels live on Motorsport.com this weekend.