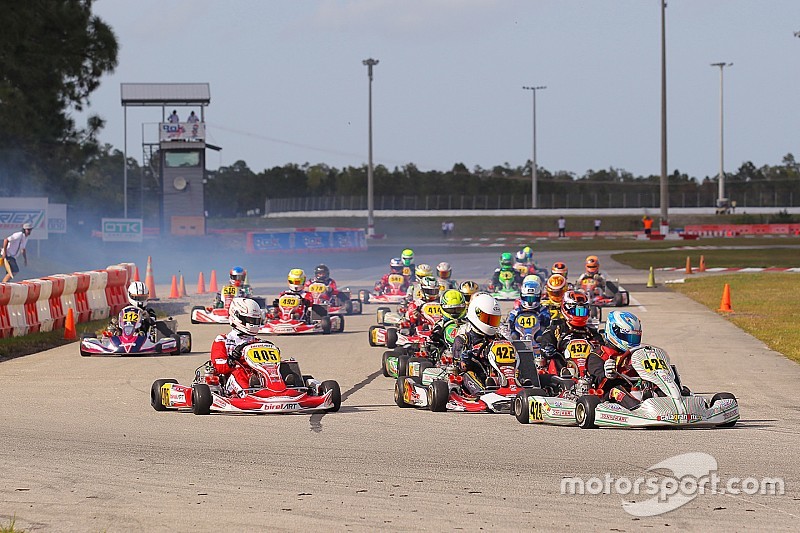 Grids are set for Championship Sunday in the Sofina Foods Florida Winter Tour ROK Cup presented by FIKSE Wheels and there have already been some interesting twists, as Cody Schindel describes.

With a handful of points available this weekend, some of the championship standings have been shaken up following Saturday’s action with certain drivers carrying big momentum into the final day and others pondering what’s gone wrong.

Leading the way in the ROK Junior category and really coming into his own this weekend is Canadian Matthew Latifi. Undoubtedly the smallest driver on the grid, Latifi secured the pole position for Sunday’s Final following an action-packed PreFinal that saw four different race leaders.

Michael d’Orlando wound up second and boosted his championship chances after points leader Mathias Ramirez was spun at the start, although he did recover to finish an impressive fifth. Gabriel Paturle, another whose sights are set on the championship, finished third and will be joined on Row 2 by Jett Noland.

It has been a roller coaster in Mini ROK this weekend as the championship standings have been thrown in a blender. Following the action on Saturday, initial leader Derek Carmenate has fallen to fourth while Jak Crawford has gained the lead. Reece Gold has also moved up into second, only 36 points back from Crawford with Matheus Morgatto now third.

This all happened when Carmenate was involved in a first turn accident that included his teammates Tyler Maxson and James Egozi. Maxson was initially spun on entry and collected many drivers with him as drivers scrambled to avoid the backward kart.

The PreFinal was eventually won by Luca Mars, who started 13th on the grid after initially qualifying 32nd. Crawford, Morgatto and Gold finished behind Mars with Sebastian Montoya completing the top-five in the PreFinal.

With the top-four separated by only 107 points, anything is possible entering Sunday.

In ROK Senior, Kyle Kirkwood remained on top, albeit with a little more of a challenge on Saturday. TechSpeed teammates Olin Galli and Alain Sisdeli, along with Ryan Norberg, have taken everything they can to Kirkwood on the starts, but the Florida driver has kept his composure this weekend and managed each situation well, recovering the lead and hitting his marks to build a gap.

Sisdeli will start alongside Kirkwood on the front row with Roman DeAngelis and Stirling Fairman lined up behind. Norberg starts on Row 3 after receiving a penalty, while Galli is back in 10th after an incident.

Austin Garrison has built up his lead in ROK Shifter, staying out front and gaining the maximum amount of points available so far this weekend. Danny Formal has kept him honest, jumping to the lead at the start of the PreFinal until Garrison resumed the lead position a few laps later. Formal eventually fell to Oliver Askew in the late stages on the PreFinal as well and he will start the Final in third. Of the ROK Shifter Masters, Victor Jimenez is on top.

Freddie Slater held on to win the Micro ROK PreFinal, over Jeremy Fletcher, Connor Zilisch and Oliver Denny. However, Denny received a two-position penalty on the start, forcing the championship leader to start the Final from sixth on the grid as he looks for his third win of the season.

Finally, Anthony Honeywell was on cruise control in ROK Masters, winning the PreFinal by seven seconds over Daniel Rieger and Bruno Fusaro.