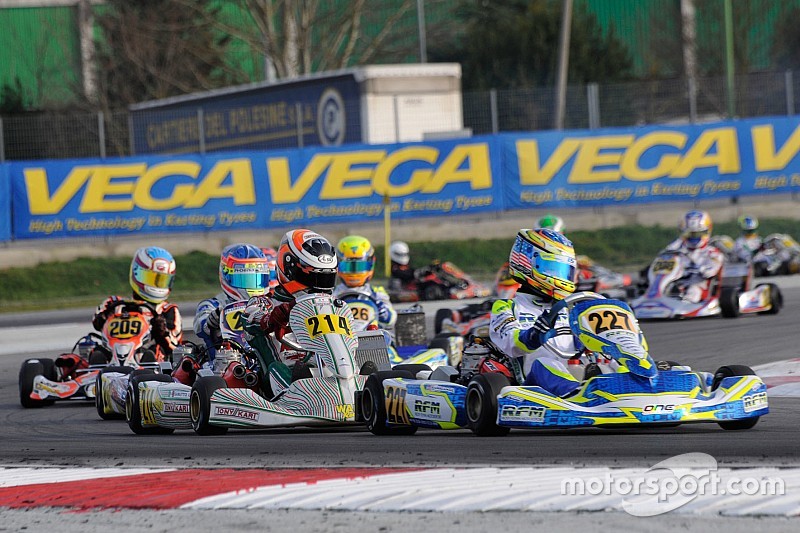 The American was one of the fastest drivers throughout the whole weekend, placing second behind Lorenzo Travisanutto after the preliminary heats.

However, Travisanutto was forced to retire in the pre-final race and, as such, missed the showdown.

It was the 2015 KF World Champion Karol Basz who started the final race on pole but the protege of former F1 team owner Giancarlo Minardi found himself slipping behind Christian Lundgaard and Sargeant after the first lap.

Lundgaard, Sargeant's main rival last year, could only hold on to first place for a handful of laps before surrendering to the American.

Sargeant managed to pull away afterwards and his victory was never in doubt as he strolled to the chequered flag.

Basz fought back to regain second from Lundgaard as the Dane completed the podium, holding off 24-year-old Flavio Camponeschi and fellow junior class graduate Paavo Tonteri during the final laps.

Rookie Kiern Jewiss was victorious in the OK Junior category, securing his triumph with a last-lap overtake on Timothy Peisselon.

Charles Milesi led the early laps of the decider but was overtaken by both Peisselon and Jewiss at the halfway point.

Jewiss, managed by Mark Blundell Partners, then started to attack Peisselon and timed his overtake perfectly, forcing his way past on the final lap.

That earned the Briton a win on his debut in the category, while Peisselon and pole-sitter Fin Kenneally made up an all-rookie podium.

The top five was rounded out by Milesi and SMP protege Pavel Bulantsev.

Fellow Italian Marco Ardigo had dominated the weekend up to that point and led the way for most of the final, but Rick Dreezen and De Conto both closed the gap towards the end.

Tony Kart factory driver Ardigo eventually dropped behind the duo and De Conto then found his way past Dreezen on the final lap.

Polish youngster Tymoteusz Kucharczyk and Czech Dan Skocdopole, who ran Paparo close for most of the weekend, only ended up third and eighth respectively, the latter receiving a post-race time penalty.