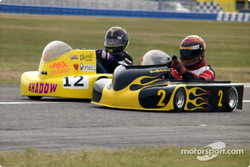 It all started with Briggs & Stratton Day at Daytona International Speedway Thursday, December 26th where over 200 4-Cycle kart racers took the challenge to compete on the 2.5-mile high banks and road course at Daytona International Speedway in 10 classes highlighted by the introduction of the new Briggs & Stratton Animal Class where Jackson Berrier of North Carolina blew away the competition taking the checkered flag with a one lap advantage over the field. 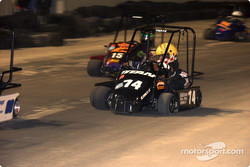 A record breaking 505 racers entered in the WKA/George Kugler Manufacturer's Cup Series presented by Bridgestone Margay Nationals an inaugural event raced on the new 7/10-mile, 12-turn road course inside of Daytona International Speedway between turns three and four. Yellow Fin powered Energy kart pilot Casey Neal, of Middletown, OH was the event's standout with three wins. "The kart handled great dad got it hooked up good and the Yellow fin motor was flawless," Neal described after turning in a perfect performance in Formula Yamaha Junior. "I can't believe I won three. You have to be on top of everything and be none stop working have a great kart and good running motors to do this."

At 1,957 entrees the WKA/Briggs & Stratton Speedway Dirt Series 2002 Dirt World Championships presented by American Power Sports made it the third largest ever held at Daytona Municipal Stadium where Eddie Bryant Racing Engines powered Phantom Kart Pilot Tony Belk, of China Grove, NC was the lone standout and whose kart is now proudly displayed at American's number one motorsports attraction Daytona USA. Belk earned that right with two wins and a second place finish. "It ain't hit me yet that my kart's going to be at Daytona USA," Belk said after winning the event's last race Briggs Heavy. "We've had a good week and the guys that help me have worked hard." 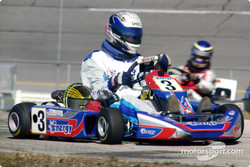 Complete flag-to-flag coverage of all four Daytona events and more photos can be found in an upcoming issue of WKA's Karting Scene. To subscribe visit the WKA web site at www.worldkarting.com or call the office at 704.455.1606.

Racers in the WKA/Dunlop Tire Road Racing Season will compete at Carolina Motorsports Part in Kershaw, SC March 21-23 for their second national of eight national races scheduled for the 2003 season and WKA/Briggs & Stratton Speedway Dirt Series competitors will meet for the second time at Oak Grove Motorsports Park in Baker, FL April 11-13.