Today, two 30-minute practice sessions were held for the entrants for the Le Mans 24 Hours. Four teams took advantage of them to fine-tune their preparation.

A fine rain was falling on the Bugatti layout – a permanent circuit inside the Le Mans 24 Hours track – when the lights went green this morning at 09h00. This failed to dissuade six cars from taking to the track immediately in view of the race on 22-23 June.

They were: the three Audi R18 e-tron quattros driven by Benoît Tréluyer, Loïc Duval and Lucas di Grassi, the no. 36 Alpine-Nissan with Pierre Ragues at the wheel, the no. 33 Honda Performance Development entered by Level 5 Motorsports with Ryan Briscoe and the no. 76 IMSA Matmut Performance Porsche 911 GT3 RSR with none other than Jacques Laffite in the cockpit! 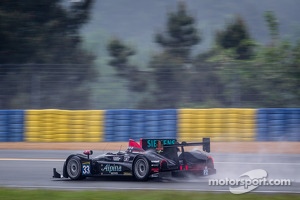 Laffite will not start the Le Mans 24 Hours in which he has already raced on nine occasions: he was there to prepare for reports on Eurosport for which he will be a consultant during the event.

The same cars continued running after the lunch break from 14h00-14h30 although only a singleton Audi R18 e-tron quarto ventured out.

No times were recorded during these sessions which went off without incident.

Preparations are on-going for the race. At 18h30 the Le Mans Municipal orchestra will also take to the track to rehearse the Marseillaise, which it will play before the start on 22nd June.