Among the 168 drivers on this year’s entry list, the Frenchman has the greatest number of participations in the event

The 90th edition of the 24 Hours of Le Mans is also the 20th anniversary of the overall victory claimed by Christophe Bouchut on his first attempt. Among the 168 drivers on this year’s entry list, the Frenchman has the greatest number of participations in the event, where he is delighted to be competing for a manufacturer once again.

At the start of this season, Christophe joined the Lotus Praga LMP2 team, which is entering two of its new T128 coupé cars, driven by V8 3600cc engine. The only driver to have won the 24 Hours of Le Mans, Daytona and Spa will share the wheel of the nr 31 car with British driver James Rossiter and Kevin Weeda from America. 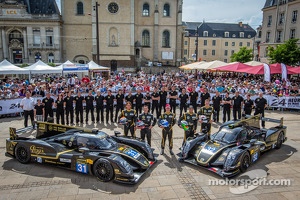 « It is an honour and a privilege to celebrate this 20th entry with a prestigious manufacturer such as Lotus, » emphasised Christophe. « I am delighted to be part of the team that will race the T128 in a 24-hour race for the first time. For me, it is an interesting opportunity on both the sporting and technical front. I am sure that the car will be competitive on the Le Mans track, and reliable over the distance. The engine is tried and tested, and we had a trouble-free test day. Among the 22 cars taking part in the LM P2 category, there are some excellent teams and very good drivers, but we have a real opportunity to finish on the podium.»

In the 24 Hours of Le Mans more than anywhere else, the human factor is particularly important. Christophe has great confidence in the team put together by Lotus Praga LMP2 to face this most important of endurance races: « I know Colin Kolles and his Kodewa team well, and they are in charge of the preparation and the maintenance of the two T128 cars entered. We have faced the 24 Hours together in the past. Theirs is one of the rare endurance teams to have managed a Formula One team. They have an extraordinary background, and the quality of the work undertaken by the mechanics is extraordinary. I stayed with them late on the Sunday evening after the Test Day, and I was able to appreciate the speed at which they totally dismantled the other car after it went off. I had never seen such a thing before! As far as my team-mates, we know that James Rossiter is a fast driver, who has done a lot of F1 testing. As for Kevin Weeda, this is his first Le Mans, and I will do all I can to advise him in order to make things easier for him throughout the week.»

A look back in history…


Christophe has plenty of memories and stories to tell about his 19 previous editions of Le Mans, which have seen him reach the finish on 12 occasions. “The first thing that comes to mind is that these 20 years have gone by far too fast. When I arrived at Peugeot, I didn’t really have a precise career plan. The victory in the 24 Hours of Le Mans with the 905 gave me everything. Thanks to that win, I went from being an amateur to a professional, and since I’ve spent my life travelling around the world.»

As well as that famous 1993 edition, Christophe remembers with great emotion his two category pole positions, in 2000 with an LM GT Porsche, and then in 2007 with an Aston Martin DBR9. « George Howard-Chappell was worried that Aston Martin Racing might lose out on pole, and he came to see me thirty minutes before the end of the session. They put some new tyres on my car, and I claimed the LM GT1 pole position on the last lap! » In that race, he finished on the third step of the podium. Christophe, who is the reigning LMP2 double-champion of the American Le Mans Series, also added a third place in this category to his Le Mans record, with Level 5.

From 1993 to 2012, Christophe has raced eleven different makes in the 24 Hours of Le Mans. “I have raced in all the categories with equal pleasure, and have competed with six factory teams. There was Peugeot, Honda and the NSX in GT, the attack from the Porsche-Kremer K8 prototypes right after our Daytona win, Mercedes-Benz-AMG and Aston Martin Prodrive. Today, I am starting a new chapter with Lotus, and I am very proud to have been chosen.”


Paradoxically, in 1993, teams and manufacturers were mainly looking for experienced drivers for their cars. A French Formula 3 Champion such as Christophe was less popular ! Nowadays, the teams appear to prefer recruiting young drivers. « The cars were very different twenty years ago. They were less reliable and did not have the driver aides or the aerodynamic downforce that we have today. A prototype reached a speed of 375 km/h and the gap between them and the GT cars was frightening, you needed real experience to get to the end. The philosophy of endurance racing has changed, and it has become a long sprint. But I have been able to adapt, I am still at the top physically, and I still have the speed which allows me to face the future with serenity.»

As far as passion and the will to win are concerned, Christophe has nothing to envy the young drivers : « I look forward to this race every year with great impatience. I still have the same pleasure in driving a race car on this track that I love, and which has given me everything! »

The programme of celebrations