Following in the footsteps of other auto racing sanctioning bodies, the Automobile Club de l'Ouest has taken cost-cutting measures into its own hands. The organizers of the 24 Hours of Le Mans announced Monday that it has canceled its test day at ...

Following in the footsteps of other auto racing sanctioning bodies, the Automobile Club de l'Ouest has taken cost-cutting measures into its own hands. The organizers of the 24 Hours of Le Mans announced Monday that it has canceled its test day at Circuit de La Sarthe, originally scheduled for May 31, 2009, due to the global economic downturn. 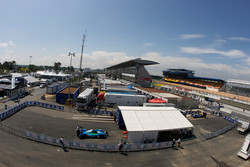 "The Le Mans 24 Hour race has always been in tune with the times and when motor racing shows signs of disquiet linked to the economic situation, it is the ACO's duty to take preventive measures while respecting the sporting regulations," the statement said.

With the elimination of the test day, teams will now be required to arrive at the circuit by June 8 for scrutineering, cutting an entire week of travel and accommodation expenses. This is in addition to the tire, fuel and mechanical costs required to run a car for the mandatory test.

The ACO has also adjusted its race week schedule due to the elimination of the test day. Wednesday will now be practice-only, with only one day of qualifying on tap for Thursday. The twice-around-the-clock marathon will remain at its 3:00 p.m. local start time on Saturday, June 13.

This isn't the first time the test day has been cancelled, as preliminary practice was suspended in 1974 because of the oil crisis. It was reinstated in 1986 for two years but then cancelled again. In 1993, organizers brought it back, then called pre-qualifying, and has been a part of Le Mans ever since.

In addition to cost-cutting measures at Le Mans, the ACO also announced that it will shorten its European-based Le Mans Series weekends from four days to three. Similar measures have already been taken in the American Le Mans Series, which plans to eliminate track-promoted testing sessions at Sebring, Mosport and Road Atlanta next year. No word has been given over the status of the Series' Winter Test, scheduled for January 26-28 at Sebring.