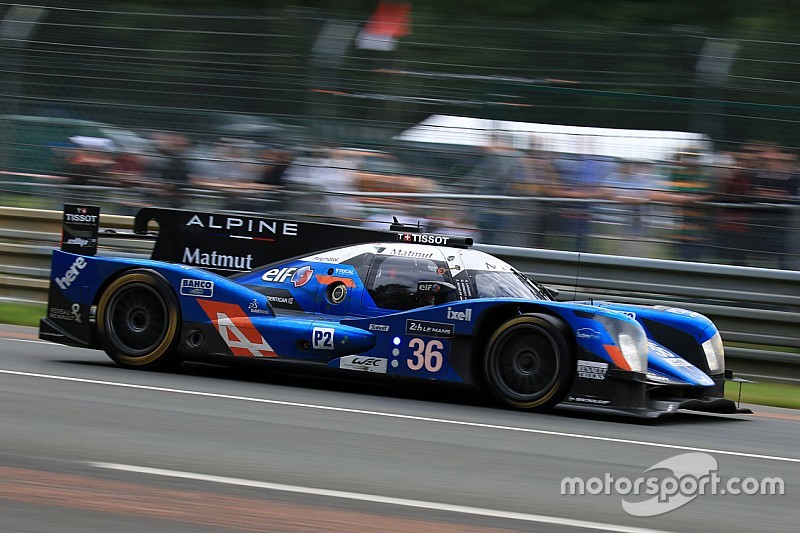 The LMP2 battle of last weekend's Le Mans 24 Hours may have taken a backseat to the more dramatic events of LMP1 and GTE, but Signatech Alpine's triumph deserves to be talked about. Sam Smith looks back.

The ever-competitive LMP2 class produced a fascinating duel between a variety of pre-race favourites at La Sarthe, all of them running Oreca (or at least Oreca-derived) machinery.

And after several key rivals fell by the wayside, it was the joint WEC points-leading car before the race – the #36 Signatech Alpine of Nicolas Lapierre, Gustavo Menezes and Stephane Richelmi - that took a famous win on home turf.

Despite some stellar night stints from Le Mans rookie Menezes, the race only really fell to Les Bleues when the #46 Thiriet by TDS entry crashed in the hands of its backer's son and heir, Pierre Thiriet, in the 17th hour.

Thiriet’s teammates Mathias Beche and impressive rookie and Toyota junior driver Ryo Hirakawa had opened up a three-minute cushion on the Alpine-branded #36 Oreca by dawn.

A dash of luck during a safety car sort-out aided the TDS machine, but still it showed some remarkable consistency from its three drivers. Each set their fastest race lap within 0.48s of each other, with Thiriet surprisingly being the quickest.

They could have been a race winning trio, but the lanky Frenchman’s mistake at Mulsanne Corner inflicted enough damage to render the red-and-black Oreca hors de combat.

The dismay of one French team was relief to another, and released the Lapierre, Richelmi and Menezes-crewed car into a clear lead, which it controlled by keeping the chasing #26 G-Drive Oreca at arms length, and more often, than not a lap ahead.

Even a slow pit stop late in the race couldn’t derail the Signatech Alpine car, which injected some much-needed patriotic fervour at the chequered flag.

For Lapierre, it was a happy double after taking the crown last year also with KCMG. It was the first time back-to-back LMP2 titles had been clinched by a particular driver since Tommy Erdos and Mike Newton achieved the feat together in 2005 and 2006 with the RML Lola.

“Two in a row is very special, especially with a French brand like Alpine,” said Lapierre. “We lost a bit of time at the start with some bad strategy calls at the beginning, but we took the lead back in the middle of the race and we had to stay in front for half the race, it was not easy.

"The car was really fast, probably the fastest. We could push when we needed to and then relax when we had a margin."

Asked by Motorsport.com about the significance of his achievement, the Frenchman continued: “I tried to bring my experience to the team, I had the chance to drive for a factory team in LMP1 and the winning team in LMP2 last year.

“Everything I can bring to the team is always good, and I had two rookies as teammates [Menezes and Richelmi] who I had to help as much as possible. It worked very well, we had a good atmosphere.”

Lapierre, who was replaced at Toyota for the 2015 WEC campaign after a messy divorce from the Japanese manufacturer, says he is happy cleaning up in LMP2 for the time being.

“I don’t really care [about LMP1], I’m happy where I am,” he said. “After everything that happened [at Toyota] I just enjoy every race.

"I feel good here, Philippe [Sinault, Signatech boss] was one of the guys who helped me in my single-seater career, so I am just enjoying the moment."

Meanwhile, G-Drive and KCMG drivers were both left with good reasons to believe they could have won the LMP2 race if not for ill fortune.

Rene Rast, who proved to be the ultimate pacesetter in the class over most of the week, rued small issues for the pole-sitting #26 car he shared with G-Drive teammates Will Stevens and Roman Rusinov.

“It was a tough race, but we had no mechanical issues at all, just a few small things like a puncture and two penalties [for a pit infringement and a slow zone procedure wrap],” said Rast.

“We tried to catch the Signatech, but those things cost us. We finished something like 2m40s back, but for sure we lost more than that with those three issues, so it got away from us.”

KCMG had its own bad luck story, triggered by attention being needed to the #47 car's regulation number panels, which ended the title defence hopes of Richard Bradley and Matt Howson.

“We were looking good, so good,” Bradley told Motorsport.com after the race. “We were doing 12-lap stints which I don’t think the others were, and we felt comfortable in all areas, the pace was easy for us.

“Then I think some water got in the electrics or something. We started to lose telemetry, and then Tsugio [Matsuda] stopped on the run down to Indianapolis. We managed to get him back though and get back out.

"Then the steering stuck going in to Porsche Curves and I spun, and that was it. So frustrating, because I really think with the strategy we had, that we could have fought to take a double here.”

Manor also looked good to challenge for a strong podium position on its Le Mans debut, the team having being reduced to a single entry from its normal two-car WEC assault.

The #44 Oreca led for 44 laps after star driver Roberto Merhi blitzed his way to the front at the turn of the first hour, producing a superb display of aggressive driving on a still-damp track.

The Spaniard was a sensation in the first few hours, and ran as high as seventh overall at one stage, vanquishing whatever was in his path.

Sadly, a spin for Matt Rao relegated the car back down the order and then a starter-motor issue put the car well out of contention.

Its race ultimately ended in spectacular fashion when, after an excursion at Indianapolis, Rao smote the wall at Porsche Curves when the damaged bodywork folded below the wheels.

The final Oreca 05, the #35 of the Baxi DC Racing Team, was another early retirement as Nelson Panciatici hit the wall at the first chicane at 7am, ostensibly the result of a mechanical problem.