The calendar of the first Asian Le Mans Series in 2013 will consist of six events in four countries including South Korea with a race at the brand-new Autopia circuit.

On 4th August 2013 the promoters of the Asian Le Mans Series will organize a 3-hour event in South Korea. It will take place in the Inje region on the Autopia circuit, which is currently being built. It will measure 4,207 km, has 16 000 grandstand seats and will be inaugurated next May. It is located only 130 km from the South Korean capital, Seoul, and linked to it by motorway.

As in all the rounds of the 2013 Asian Le Mans Series, two single-make support races will also be on the programme of this eagerly-awaited weekend in a country which will host its first international endurance race under the Le Mans label. 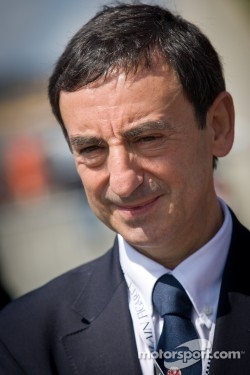 This event will complete a calendar of six rounds, three in China (Zhuhai, Shanghai and Ordos), one in Japan (Mount Fuji) and one in Indonesia (Sentul, 8th December).

Pierre Fillon, President of the Automobile Club de l’Ouest: “South Korea is an important country in terms of business, in particular with an industry that’s linked to a very dynamic motor car sector thanks to its major car constructors, accessory suppliers and big manufacturers. The Korean go-ahead spirit is an important guarantee for the development of our Le Mans races. We really had to be present in a particularly dynamic country of fifty million inhabitants.”

Soon-Sun LEE, the Governor of Inje county: "Every year millions of people come to Inje County to enjoy beautiful nature and leisure sports. With the Le Mans race, our region becomes more fascinating for tourists. The brand Le Mans is very well known in Korea and I’m sure many Korean motorsports and automobile fans will come to see the race, and that will boost the local economy."

Chi-Ho YANG, the CEO of Inje Autopia Ltd: "Technically Le Mans racing is a very demanding sport and reliability and continuous performance are key factor for success. That suits the Korean mentality exactly. Although we have a strong automobile industry and millions of car enthusiasts, curiously the motorsports fan base is not increasing. But I’m pretty sure the Le Mans race will play a bridge role for binding the automobile and motorsports industry together. That’s the reason why we need a long term relationship with Le Mans.”

Rémy Brouard, ACO International Development Director: “By programming this race in South Korea we’re also looking at the possibility of giving the start in the late afternoon between 17h00 and 20h00 to have a nighttime finish, one of the strong points of the Le Mans label events, so that we can have a podium ceremony at night and then a great Spirit of Le Mans evening.”

Mark Thomas, S2M Managing Director, promoter of the Asian Le Mans Series: “Autopia is a great location and the layout of the circuit is a hilly one, which all the drivers in the Asian Le Mans Series will love whether in prototypes with the LM P2s and Formula Le Mans or in grand touring with the Le Mans GTEs and the GTCs (category which includes FIA GT3s and Japanese GT 300s). It’ll be a kind of Asian Petit Le Mans! In particular I’d like to thank the Inje authorities who we’ve been talking to over the past few months for their great welcome in South Korea.”