Aston Martin Racing took a second consecutive win in LM GT1 class at the 24 Hours of Le Mans Sunday. David Brabham, Antonio Garcia and Darren Turner battled against rivals from Corvette Racing to take the victory in the endurance classic by less ...

Aston Martin Racing took a second consecutive win in LM GT1 class at the 24 Hours of Le Mans Sunday. David Brabham, Antonio Garcia and Darren Turner battled against rivals from Corvette Racing to take the victory in the endurance classic by less than five minutes after more than 4,500 km of racing. 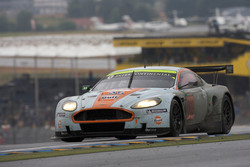 The DBR9 car, wearing the 009 number and its spectacular Gulf livery, took the class lead in the first three hours. It was a close fight all the way to the chequered flag for the company now based in Gaydon, Warwickshire, England. Indeed, at the halfway point the two rivals were separated by just four seconds.

Brabham, who drove the first and last stints in the race, commented: "I've competed at Le Mans 15 times, but this is the closest race I've ever experienced. That's exactly how I thought it would be from the start of the year, and of course it makes our second win here even more satisfying."

"The finish was particularly tense; we really didn't know how it was going to work out up until the very last lap. I've never driven a race where I've had to push so hard from the very start to the very end: I think it's been a great show for everyone," he added.

Antonio Garcia, a new recruit to the Aston Martin Racing team this year, commented: "It was actually a perfect event for us, but there were some stressful moments. When I got the message in the middle of the night that the Corvette was right behind me, I was a bit worried at first but then I realised that we had the pace to pull away, so from then on it was a bit easier. Mechanically the car has been perfect: very quick, and very easy to drive."

Darren Turner, who has been an Aston Martin Racing driver since the programme started in 2005 said: "Lots of people say that winning is easier the second time round, but I'm not sure that.s true Every victory is tough but this one was something else. The fact that we managed to achieve it against such strong opposition is a huge tribute to the entire team. Conditions were far from easy, but thanks to a great car and a great team we were able to do it."

Aston Martin also claimed 4th place in class in the 2008 race at the La Sarthe circuit in the second DBR9 driven by Heinz-Harald Frentzen, Andrea Piccini and Karl Wendlinger. The No. 007 car suffered an alternator problem just after 5a.m. on Sunday morning which although only causing a 15 minute delay, was enough to put it out of contention in such a close race.

For the second year Corvette were left with second place in class. The No. 63 Corvette C6.R, which is perhaps the loudest competitor at Le Mans 24 Hours, ran well, but was not quite fast enough. The team were forced to replace the right front brake pads in the 17th hour, but this delayed the car for only 90 seconds. This car, driven by Johnny O'Connell, Jan Magnussen and Ron Fellows took the second place for Corvette whilst the No.64 Computerware Corvette C6.R driven by Oliver Gavin, Olivier Beretta and Max Papis took the final place on the podium.

"Once again, we saw one of the epic battles in all of sports car racing," said Corvette Racing program manager Doug Fehan. "When you can take two cars, run them for 24 hours, and have them finish just minutes apart, it's an incredible achievement for both teams. We had a brake issue with the No. 63 Corvette and overcame a problem with the alternator in the No. 64 Corvette, and both cars finished on the podium. When we look at Corvette Racing's overall record and performance here at Le Mans, Chevrolet can be proud." 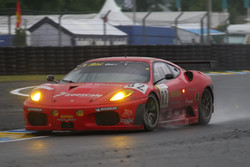 LM GT2 was a Ferrari celebration and a clean sweep, with the Marenello cars taking a 1-2-3-4 finish. The Risi Competizione Ferrari F430 of Gianmaria Bruni, Mika Salo and Jaime Melo led for most of the 24 hours after the IMSA Performance Matmut and Flying Lizard Porsches collided with each other early on.

JMB Racing took fourth, while only Porsches to make it to the finish were the Team Felbermayr-Proton and the Flying Lizard Motorsports cars, which both spent a fair bit of time in the pits.