The team returns to the Circuit de le Sarthe in a strong position as it leads the FIA World Endurance Championship (WEC).

Le Mans - Aston Martin Racing prepares for its most ambitious assault on the 24 Hour of Le Mans as it takes five Vantage GTEs – the team’s largest entry to date – to the world-famous endurance race this weekend (22-23 June).

The 2013 event is set to live long in the memories of racing fans as Aston Martin celebrates its centenary and the 24-hour event marks its 90th anniversary.

The team returns to the Circuit de le Sarthe in a strong position as it leads the FIA World Endurance Championship (WEC) in both the Pro and the Am GTE classes following the first two rounds. Furthermore, at the official Le Mans test day (9 June) it topped the timesheets with the #97 Pro car and the #96 Am car both showing class-leading pace.

“Yes, we were the fastest in the test session, but winning a race like the 24 Hours of Le Mans takes more than speed,” comments Aston Martin Racing Team Principal, John Gaw. “Saying that, we’ve also shown great reliability – throughout both the Six Hours of Silverstone, at which we won in both classes, and the Six Hours of Spa where we had no significant issues with any of our Vantage GTEs. 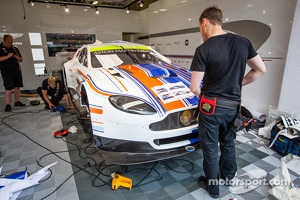 “Running five cars smoothly for 24 hours, however, is going to be a huge challenge. We are very well prepared, thanks to our hard-working team, and we are incredibly focused but we know that there is fierce competition in both GTE classes. Our ambition is to be on that podium in both classes; our desire is to be on the top step – that would be the most fitting way to celebrate Aston Martin’s centenary year.”

Alongside the prestigious endurance race, Aston Martin will continue its centenary celebrations with a host of activities on and off the track. The weekend kicks off at 10:55 hrs on Saturday 22 June, when an exclusive selection of modern and historic Aston Martin sports cars take part in an exclusive Centenary Festival Parade led by Aston Martin’s latest concept car, the CC100, which will be driven by the British company’s CEO Dr Ulrich Bez.

Created as a stunning celebration of the great British brand’s 100 years of sports car excellence the one-off CC100 looks both to the past and the DBR1 – Aston Martin’s greatest sporting triumph on the track – and to the future with its teasing glimpses of potential future design direction.

In addition, Aston Martin Racing’s partner Gulf will be unveiling the winning design for its livery competition. To mark Aston Martin’s centenary, the global oil brand invited fans to design the Le Mans livery for the #97 Vantage GTE. Drivers Darren Turner (GB), Stefan Mücke (D) and Peter Dumbreck (GB) chose their favourite design, which will be unveiled at scrutineering today (Monday 17 June) and will adorn the #97 car throughout race week.

David Richards Aston Martin Chairman, said: “The 24 Hours of Le Mans is, without doubt, the greatest sports car race in the world and this will be the ninth consecutive year that we’ve taken part. However, our centenary year is rather special and if we were to win on this occasion it would be the perfect way to cap a year of celebrations.”

Aston Martin Racing’s five-car campaign – its most ambitious entry to date in the endurance classic – comprises three entries in the GTE Pro class and two in the GTE Am class. Each car has a three-strong driver line-up with Jonny Adam (GB) and Richie Stanaway (NZ) acting as reserve drivers for the team for the 24-hour race, ready to step into any car should they be required.