After an intense qualifying to the Spa 1000km race, the 2nd race of both the Le Mans Series and Intercontinental Le Mans Cup, it was the German's and Audi with the all new R18's celebrating a 1-2-3. The fastest lap of 2.01.502 was set by Timo Bernhard followed by the number 2 Audi of Andre Lotterer (2.01.788) and number 3 Audi of Tom Kristensen (2.02.145). 1-2-3 after qualifying gives Audi a great change to continue it's winning streak that comes to debut wins. Since 2000 starting with the R8, every Le Mans sports-car of Audi has won on it's debut.

“I’m incredibly happy about the result, particularly for the team,“ smiled Bernhard. We did carry quite a big burden because every new car at Audi has immediately been successful. I think we’ve squeezed out the maximum today. That I had the good fortune of clinching the first pole position in the Audi R18 TDI fills me with pride."

For Peugeot, the qualifying was a complete pancake. The team was hoping to take advantage of the closing minutes of qualifying to make up the lost time but the session was red-flagged and never restarted. This meant that the fastest Peugeot will start from the 4th place at the grid, while being the older spec 908 HDI FAP of Team Oreca Matmut. The factory entries of Peugeot Sport Total will be found from 13th and 18th places, even behind some of the the LMP2 entries.

Bruno Famin, Technical Director at Peugeot explained, “As we are positioned at the start of the pit lane, we had to wait until all of rivals had gone out before we could head out onto the track, so as to avoid the traffic. So we had no choice but to wait for a clear window to head out onto the track and obviously, that left us vulnerable to this sort of incident. It’s just part and parcel of racing. The start looks like it will be difficult, we’ll have to steer clear of any collisions, but it is a long race and things will take shape as the race progresses. We are fighters. Above all, we’re here to prepare for the 24 Hours of Le Mans and we are determined to achieve our objective. If we can get through the first six hours of the race without any problems, we shouldn’t be too far away from the front runners!”

Among the petrol cars, fast entries were very expected. Rebellion Racing's number 12 entry set the fastest time for petrol and took the 5th spot at the grid overall, while ASM-Quifel Team Zytek was 2nd fastest (6th overall) and Pescarolo Sport 3rd fastest (7th overall) . Rebellion Racing's number 13 entry did not take part to the qualifying due to a heavy crash at one of the practice sessions. 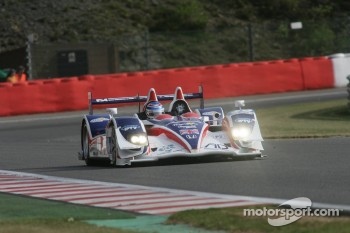 At LMP2´s it was Strakka Racing, one of the LMP2 powerhouses, surprisingly managed to put their car into the pole position with the lap of 2.10.016. Along with Strakka Racing, RML -- the team that had to withdraw from the Spa 1000km race due to collision at one of the practice sessions -- and Level 5 Motorsports have been finding it hard to be competitive with all new HPD. Strakka Racing surprisingly managed to beat the rest of the LMP2 field including the Oreca-Nissan's and strong favorites TDS Racing, Signatech Nissan and the ZytekZ11SN-Nissan of Greaves Motorsport, all teams what have been among the fastest at the LMP2 charts during the practice sessions. The race by the qualifying and practice session times will be very interesting and one to follow through with many teams having a change to win.

FLM: Neil Garner Motorsport at the level of its own out of 5 FLM teams

At Formula Le Mans (FLM) it was Phil Keen and Neil Garner Motorsport taking the pole position of the class with an impressive time of 2.13.592, almost a full second clear of the 2nd fastest team, Hope Racing. 3rd fastest team of the qualifying session was JMB Racing but already 4 seconds out of pole position. The favorites, Genoa Racing were 4th but so far have been struggling a bit at both of the LMS rounds. The race is still their strong point and it's expected that we will see the team fighting for the class win as always. 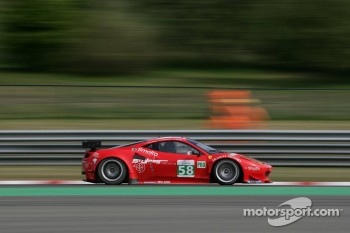 At LM GTE Pro it looks like Ferrari F458 Italia's are the cars to beat, at least if we can judge by the practice sessions and qualifying. The qualifying which saw an intense fight for the pole, was taken in the end by AF Corse´s number 71 car with the lap of 2.20.743 driven by Jaime Melo. Melo beat Giancarlo Fisichella's time (AF Corse no.51) a bit earlier and also set a good enough lap to hold off the late charge of Rob Bell of the JMW Motorsport Ferrari. Bell took 2nd place for the team while Porsche's and BMW's were playing side roles for the grid positions behind the top 3 Ferrari's.

As in the Le Mans Series round 1 at Le Castellet, it was again Nicolas Armindo of the IMSA Performance Matmut Porsche which took the fastest time of the LM GTE AM qualifying. The team, which once again was very impressive at the qualifying, almost beat the LM GTE PRO entry, is looking to do well at the race as well. The main challenge judging by qualifying seems to become from the teams using Ferrari F430's. Although the other entries can not be forgotten, knowing how strong the rest of the Porsche squads are along with the Corvette of Larbre Competition and the Aston Martin Vantage of Gulf AMR Middle East.

In overall the race it will be very challenging for all the squads considering the possible weather, dealing with traffic and strategy playing a big role with the results, as seen with the past editions of Spa 1000km race. The race will start at tomorrow 14.05 local time and will end 6 hours later.

Peugeot Is Victorious At Spa