Audi's 12-strong driver line-up at Le Mans is a cosmopolitan one, with Britain, France, Denmark, Switzerland and Germany all represented. But there are also two Italians in the ranks: young newcomer Marco Bonanomi and respected veteran Dindo Capello. The two men are at opposite ends of their careers, but both stress how lucky they feel to be part of the Audi programme.

27-year-old Bonanomi is full of enthusiasm for this latest chapter in his career. “I think sportscars are better than single-seaters,” he declares. “For sure, it's a better option for many young drivers right now. It's one of the few categories in racing at the moment where you can be guaranteed a professional drive if you're good enough. Once you're a professional, you can just concentrate on your job: driving the car, developing it with the engineers and not thinking about anything else.”

It's unbelievable what I've lived through.

For a young driver like Bonanomi, accustomed to searching for sponsors and striking deals for the next season, the stability that comes with his Audi drive is something to savour. “It's a really good feeling for me,” he smiles. “I feel so lucky, because there are so many drivers out there looking for an opportunity like this.” Bonanomi's R18 TDI, which he shares with Briton Oliver Jarvis and German Mike Rockenfeller, starts the race from sixth on the grid.

Dindo Capello has been with the Audi sportscar team from the very start in 1999. Although he turns 48 on the Sunday of the race, the years have been good to the man from San Stefano Belbo in northwest Italy, and he looked as happy and relaxed as ever on the Thursday before the race. This year, he has the chance to become the oldest-ever victor of the 24 Hours, beating the previous record holder Luigi Chinetti, who triumphed in 1949 at the age of 47.

“It would be something nice to add to my CV, and also another challenge for Tom [Kristensen, his eight-times winning co-driver]. Knowing him, he knows exactly how much longer he'll have to keep racing to achieve it!” he jokes. It looks likely that this will be Capello's final appearance at Le Mans, but he's totally at ease with the prospect after such a stable and successful career, which has included three overall victories at La Sarthe.

“Nothing is 100 percent decided, but I would say yes, this will probably be the last one for me,” he says. “It's unbelievable what I've lived through: I joined Audi in 1999, the first year they raced Le Mans, and now 13 years later I'm still here. We've changed so much technology and improved the car so much in that time. I'm lucky and proud to have been part of these great steps and that's why I think it's fair enough that this will be my last Le Mans.” 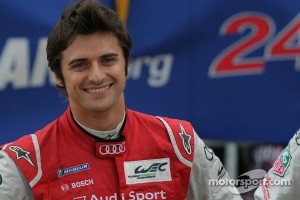 Elaborating on the progress made in the intervening years, Capello remarked: “At the beginning the R8R was not the fastest or smoothest car on the track – it was so bumpy and difficult to drive! But within three years I was in probably the best works car of last 20 years, the R8. Then we had the step from petrol to diesel, and now from diesel to hybrid – what more can I ask? I have no regrets, so I'm quite relaxed about the decision to retire or not.”

Seeing Dindo and Marco talking together, it's hard not to think of the master taking on an apprentice to eventually succeed him as Italy's representative in the dominant sportscar racing team of our era. With Audi, Capello has had a career any driver would be proud of: everything is now in place for Bonanomi to enjoy the same.