Ingolstadt/Paris, - The Audi R10 TDI and the Audi R18 e-tron quattro have gone down in Le Mans history. Now they have been selected to join the illustrious circle of the ten most iconic Le Mans sports cars of all time by a panel of expert judges and the fans. 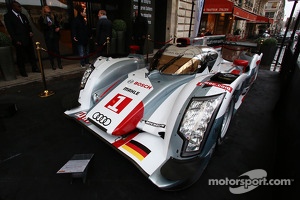 On the occasion of the 90th anniversary of the Le Mans 24 Hours on June 22/23, 2013, the Automobile Club de l’Ouest (ACO) had run a poll to select the Le Mans icons. More than 20,000 fans cast their votes online. The final decision was made by a twelve-member panel of expert judges including FIA President Jean Todt and ACO President Pierre Fillon in Paris on Friday. They selected the ten race cars that most decisively shaped Le Mans history in their respective decades.

"These two accolades fill us with great pride," said Wolfgang Dürheimer, Member of the Board of Management for Technical Development of AUDI AG when the results were announced in Paris. "Audi uses the Le Mans 24 Hours to demonstrate its technical expertise and to test new technologies on the race track. The R10 TDI and the R18 e-tron quattro are two particularly good examples of ‘Vorsprung durch Technik.’"

Three days earlier, also in Paris, Head of Audi Motorsport Dr. Wolfgang Ullrich had accepted another award. An expert judging panel of the Festival Automobile International recognized the Le Mans winning Audi R18 e-tron quattro with the "Grand Prix de l’Environnement." Through the intelligent combination of a compact V6 TDI engine and a hybrid system Audi Sport managed to reduce fuel consumption by ten percent compared to the year before.

In the 2013 season, Audi is competing with the updated hybrid sports car in the FIA World Endurance Championship and at the Le Mans 24 Hours.

Williams explains decision to sign Albon over de Vries for 2022