BMW admits it was "taught a few lessons" by Le Mans 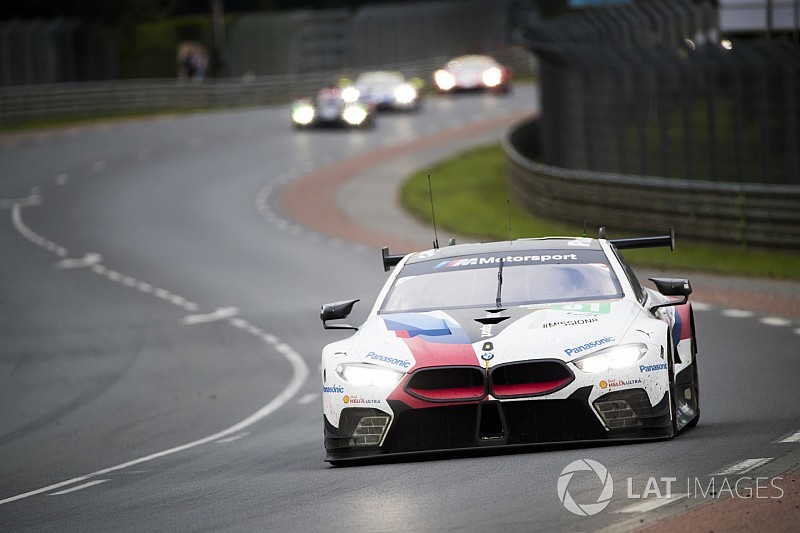 Last weekend's race marked the second outing for the M8 in its FIA World Endurance Championship specification, following a tough debut for the MTEK-run BMW squad last month at Spa.

Only the #81 car shared by Martin Tomczyk, Nicky Catsburg and Philipp Eng made it to the finish 11th in class, 12 laps down on the victorious Porsche, after losing time in the pits to change a damper and then to repair a broken radiator.

The sister #82 car piloted by Alexander Sims, Antonio Felix da Costa and Augusto Farfus was a non-finisher after a crash for Sims at the Porsche Curves in the morning hours, having also lost time in the garage to have a damper replaced.

Marquardt admitted the nature of the Circuit de la Sarthe exposed issues that the German manufacturer hadn't previously encountered in its preparations.

"We’ve shown from a speed and pace point of view the car is capable of running up there," Marquardt told Motorsport.com. "It’s our rookie season here, the Le Mans track has taught us some lessons.

"For sure one test day was not enough to confirm our package with regards to reliability.

"We’ve experienced some issues on the damper side, we picked up some debris and damaged the radiator which can always happen, and obviously Alex’s accident we have to go more into the data – it looks like he maybe slipped on some fluid.

"Apart from that, operationally the team did a great job, strategy-wise, I didn’t see any mistakes or anything. Lots of positives, but at Le Mans you have to have a humble approach.

"The track taught us a few lessons, but for sure next year at the end of the superseason, we’ll come back fast."

Marquardt said he took heart from the fact both BMWs were able to hold their own on track against the Porsche 911 RSRs and were in the mix for top-five finishes until both hitting damper troubles.

"Obviously some [BoP] adjustments were made after qualifying that brought the field a little bit together [the BMW lost 10kg], we managed really with the first few stints to get a really good balance in the car," he reflected.

"Some of the driver comments made me happy, that it was the best BMW GT car from a balance and pace point of view that they have driven so far. It’s what we wanted to achieve.

"In a 24-hour race, you have to get into a rhythm, the car into a balance window, with the tyre degradation and everything, and we achieved this.

"For sure we haven’t yet explored the full potential of the car, but I think this weekend we were pretty close to where we could be with a limited amount of experience."

What next for Alonso after Le Mans win?