Close battles throughout the field in 24H

The Audi Playstation Team Oreca suffered a lengthy problem in the pits and so released Audi's hold of the Le Mans podium and opened up the final place to a number of contenders. Franck Montagny sat patiently in the car as the team worked on the ...

The Audi Playstation Team Oreca suffered a lengthy problem in the pits and so released Audi's hold of the Le Mans podium and opened up the final place to a number of contenders. Franck Montagny sat patiently in the car as the team worked on the front suspension for nearly 15 minutes before the car rejoined in sixth place, although he was immediately on the pace and set the car's fastest lap of the race. 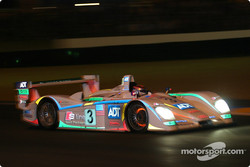 The #17 Pescarolo Sport Judd of Sebastien Loeb, Eric Helary and Soheil Ayari collided with the #8 Rollcentre Racing Dallara Nissan while running in a comfortable fifth position and pulled into the pits for an inspection. The bodywork was removed from the front and the rear of the car as the team worked mostly on the back end of the car for over twenty minutes before sending it back out in ninth position.

The #16 Pescarolo of Jean Christophe Boullion continued to lap consistantly and took advantage of a pitstop by the Racing For Holland Dome Judd of John Bosch to move up to fourth position. Bosch's car was suffering from a problem that was caused by debris that damaged the sidepod which in turn damaged the radiator.

Timo Bernhard put in a phenomenal stint in the White Lightning Racing Porsche GT3-RSR with several laps within one second of the team's fastest lap of the race as he caught up the Alex Job Racing Porsche GT3-RSR of Marc Lieb which was within a minute ahead. Both cars pitted and Jorg Bergmeister took over at the wheel of the White Lightning Racing and rejoined a couple of seconds behind Lieb but slowly dropped back.

The battle at the head of the GT1 class continued with the #58 Aston Martin Racing of Tomas Enge nearly a minute ahead of the Courage Racing pair of Olivier Beretta and Johnny O'Connell who were lapping five seconds apart. The #59 Aston Martin was a couple of laps further back after receiving a string of penalties for various infringements.

The Intersport Racing Lola of AER of Liz Halliday was pushed into the garage for work to the front of the vehicle. The #32 car had been comfortably heading the LM P2 class but was suffering problems and was held in the pits for nearly fifteen minutes before rejoining at the hands of Gregor Fisken in second place. Paul Belmondo in the Paul Belmondo Racing Courage Ford took the class lead and was half a lap ahead.

The #2 Champion Racing Audi R8 made its scheduled fuel, tyre and driver changes during the ninth hour. Frank Biela handed over to Emanuele Pirro who rejoined in second place after a trouble-free stop. The Team Jota/Zytek Engineering of Haruki Kurosawa, which had been consistantly running in seventh place, had an eight-minute pitstop and rejoined in ninth position.

The #30 Kruse Motorsport car of Ian Mitchell spun off from sixth place in the LM P2 class at the exit of Dunlop with a suspected mechanical problem but rejoined after being rescued by the marshals and returned to the pits for an inspection.