Determined endurance racer Ryan Dalziel helped get the iconic SRT Viper over the finish line on its return to the famous Le Mans 24-Hour race for the first time since 2000. 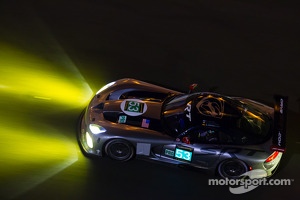 Proud Scot Ryan – who lives in Windermere, Florida – joined Dominik Farnbacher and Marc Goossens to take on some of the strongest GT teams in the world.

And they responded with a string of battling shifts to make sure that the Viper made it to the end.

Ryan – originally from Airdrie in Lanarkshire, Scotland – had an eventful series of stints, but clocked the team’s fastest lap in his final outing. He managed to keep the Viper in the top 10 of the hugely competitive GTE Pro class, and eventually they brought the car home ninth in class and 25th overall out of the 56 starters.

The race will be remembered for the tragic death of Danish racer Allan Simonsen, after a crash at Tertre Rouge. Ryan’s thoughts are with Allan’s family and friends at this sad time.

Ryan says: “Whether you win or lose, this is a tough race. With only three drivers, it is very difficult to get your rest periods right. It has just been one of those races. We were always playing catch-up, but we did the best with the 'weather limited' track time available to us.

“We actually made the car better as we went through the race so we are really pleased with that. At the end of the race we were actually on the leaders pace so we are thrilled we made so much progress.

“Mechanically, the car ran perfectly. So we have many positives to take away, and much more experience for the future.

“We will look at what needs to be changed for next year and I am sure SRT Motorsports will be back stronger.

“I was happy with how I drove. It is hard when you are the third guy in the team to just jump in and be up to speed. I took it steady in the first stint, got better in the second stint and, in the third stint, I got the quickest lap for the team, so I am proud of that. The end of the race our car was handling excellently.

“SRT have made big gains on the Viper GTS-R between Sebring and here. If we can do the same again before Petit Le Mans, then we will be very strong. I am convinced the SRT Viper will win before Petit, but I hope I can be in there and win at Petit.”

Ryan on Watkins Glen: “Watkins should be good for us. We have some good plans for Starworks that we hope to announce in the near future. But Watkins has been good to us in the past. We had a third at the six-hour last year and won the sprint race. We know the car is good there and we are knocking on the door of a victory. We just need to so a little better than we have been in all areas and we are right there.”

Ryan’s statement on Allan Simonsen: “Whether you know a driver or you are just a competitor racing side by side, you become close in this industry, it is very sad. He was one of Dominik’s best friends. They were team-mates for three years. It was bad enough for us, but to see how upset Dominik was put things in perspective. It’s amazing that he was able to drive but I know he pressed on to honor his good friend.