Davies leads despite incident with Magnussen

Jamie Davies had an eventful stint in the early hours for Audi Sport UK Team Veloqx as he served a stop-go penalty for an earlier infringement and then he collided with Jan Magnussen, leading the GTS category, sending the Dane into the tyres. These ...

Jamie Davies had an eventful stint in the early hours for Audi Sport UK Team Veloqx as he served a stop-go penalty for an earlier infringement and then he collided with Jan Magnussen, leading the GTS category, sending the Dane into the tyres. These incidents allowed the second-placed Audi to make up one minute although it was still one lap behind. 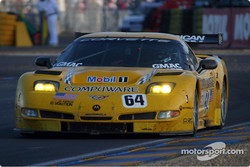 #64 Corvette Racing Corvette C5-R: Olivier Gavin, Oliver Beretta, Jan Magnussen.
Photo by Tom Haapanen.
The leading Audi picked up a 10-second stop-go penalty for overtaking under yellow flags and Davies served this penalty on lap 139, remaining stationary for considerably longer than 10 seconds. He rejoined still comfortably in the lead ahead of the Audi Sport Japan Team Goh of Rinaldo Capello.

Stephane Ortelli stopped his Freisinger Motorsport Porsche 911 GT3RS in the gravel trap at the first chicane between the two Hunaudieres straights but rejoined soon afterwards without loosing too much time.

The #15 Racing For Holland Dome Judd driven by Chris Dyson was touring slowly. The car returned to the pits and the driver gesticulated furiously in the cockpit as the mechanics changed the tyres. The car appeared to be unable to start and the car was rotated through 90 degrees and pushed into the garage.

JJ Lehto was continuing the fight by the Champion Racing Audi R8 and he was now running in fifth place. He was lapping quickest of all and even set the fastest lap of the race on his charge through the field.

The eleventh-placed Pescarolo Sport Judd of Sebastien Bourdais was running at its quickest pace of the race in an attempt to make up the two lap gap to the #16 Justin Wilson's Racing For Holland Dome Judd, but Wilson responded by setting his own team's fastest laps of the race.

The Courage Competition AER of Jean Marc Gounon pitted and both the rear and the front of the car were worked on by the mechanics. The car rejoined after eight minutes in 26th place. 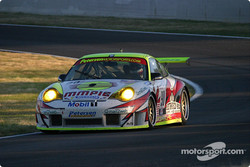 Jan Magnussen was leading the GTS class in his Corvette Racing C5-R and running in sixth place overall. Behind him in the class, and seventh overall, was the Prodrive Racing Ferrari 550 Maranello of Tomas Enge who was lapping considerably quicker. Magnussen lost over a minute on lap 132 and Enge closed up to half a minute.

Magnussen turned in his Corvette Racing C5-R on the leading Audi at the Ford chicane just before the pit straight on lap 142. The Corvette 1was sent spinning across the track and stopped softly against a tyre wall. Davies then pitted, having set a blistering time for his in-lap, but nothing was done to the car. Magnussen eventually got going and pulled into his garage for the car to be checked over by the team.

This incident allowed the Prodive Racing Ferrari, now driven by Alain Menu, to pull away in the lead of the GTS class and, after Magnussen had rejoined, the Ferrari was over five laps ahead.

The Barron Connor Racing Ferrari 575 Maranello of Jean Denis Deletraz had a big moment at the Ford chicane and spun backwards across the track, coming to rest in the middle of the circuit and narrowly collecting another car.

Tom Kristensen took over at the wheel of the Audi Sport Japan Team Goh and straight away set about making up the gap to the leader Davies by lapping around three seconds per lap faster. This was further helped when Davies lost a minute on lap 156.

Garcia on emotional Rolex 24 win after bereavements and COVID