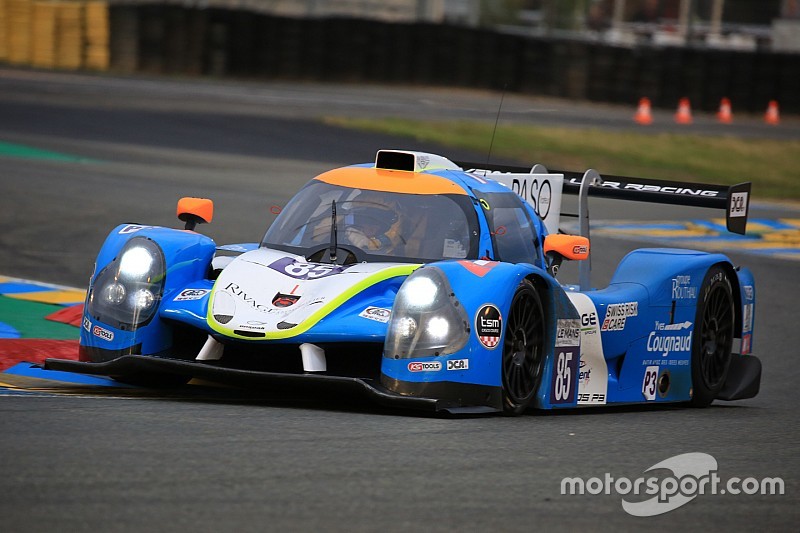 The DC Racing Ligier of Thomas Laurent and Alexandre Cougnaud took victory in the Road to Le Mans support event for the Le Mans 24 Hours.

The #85 Ligier JS P3 took control of the 55-minute race just after the mandatory driver changes, as Cougnaud handed over the car to Laurent in the lead having run fourth in the first stint.

At the start, the #32 Ginetta of Charlie Robertson passed Martin Brundle's polesitting #2 United Autosports Ligier going into the Dunlop chicane.

The ex-Le Mans winner then fell victim to James Winslow in the #61 Graff Ligier at Mulsanne corner in the battle for second, but fought his way back into the runner-up spot on the third lap.

Roberston and Brundle pitted at the same time, but both conceded considerable time to the #85 car during the driver swaps, as Laurent emerged from the pits ahead of Laurence Tomlinson in the Ginetta.

Tomlinson soon undid his teammate Robertson's hard work when he spun and beached the #32 car in the gravel at the Dunlop chicane, giving Laurent a lead of some 10 seconds over Romano Ricci's #18 Ligier.

Christian England, taking over the #2 car from Brundle, caught up and passed Ricci to claim second, ending up 16.863s adrift at the finish.

Ricci then fell foul of John Falb at the second chicane on he very last lap, giving the final podium spot to the American driver who contested the race alone in the #77 Graff Ligier.

It meant Ricci was demoted to fourth at the finish in the car he shared with Yann Ehrlacher, with the #3 United Autosports car of Guy Cosmo and Mike Hedlund completing the top five.

Dean Koutsoumidis, taking over from Winslow in the #61 car, ended up falling to ninth at the flag.

In the GT3 class, a drive-through penalty for pitlane speeding for the #88 Porsche of Egidio Perfetti and Klaus Bachler handed victory to the #57 Ferrari of Viktor Shaitar and Aleksey Basov.

Formula 3.5 racer Matthieu Vaxiviere had been on course for second place in the #26 Ferrari he shared with Nicolas Misslin, but a late mechanical issue dropped the pair out of the running.

That promoted the #55 McLaren of Adrian Quaife-Hobbs and Hiroshi Hamaguchi to second in class, ahead of Bachler in the recovering #88 Porsche.