Competitive run sees Patrick Dempsey and Patrick Long lead and Joe Foster race in the top three as #TeamAmerica Challenges for the podium right to the checkered flag.

Le MANS, FRANCE – Dempsey Del Piero Racing, and its All-American driving team of Patrick Dempsey, Joe Foster and Patrick Long, scored a competitive fourth-place GTE-AM finish in this weekend’s 90th Anniversary 24 Hours of Le Mans where Dempsey and Long each led the race twice and Foster raced in the top three in the team’s No. 77 Porsche 911 GT3 RSR. 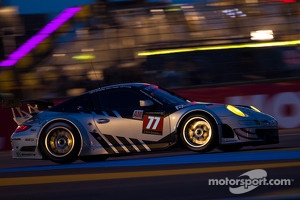 The near podium result saw Dempsey and Foster improve five finishing positions from their ninth-place GT2 showing in their 2009 Le Mans debut. Long, the only American Factory Porsche driver, added another top five Le Mans result to go with his GT class wins on the Circuit de la Sarthe in 2004 and 2007.

“We were competitive the entire race,” said Dempsey, who led the race twice during his second driving shift Saturday evening. “This is really what you want to be, Patrick did a great job on his opening stint, Joe was incredible in what seemed like every session of his in the rain, and our Porsche from Proton Competition was perfectly prepared. It was just a great race, we came up just a little short on the podium, but we will reach that goal soon enough. We had a great time.”

“It has been an amazing experience, that’s for sure,” Foster said. “Porsche, Proton and Patrick Long all did a terrific job, Patrick Dempsey drove fantastic and I drove my heart out as best I know how. We are all kind of numb at the moment. Looking forward, we would have certainly been happy with a fourth-place finish, but in the end we were about 90 seconds away from a podium finish

“The only operational difference between us and third place was an errant flat tire in the first hour of the race,” Foster said. “It was a puncture caused by debris, no problems all race with the Michelins, but we were then basically out of sequence for the next 23 hours. That’s what caught us out in the end.”

The return of Dempsey and his team to Le Mans is also being featured in a four-part miniseries premiering Wednesday, August 28 at 10:00 p.m. (ET/PT) on the Velocity network in the United States. “Patrick Dempsey: Racing Le Mans” has been over two years in the making, is affiliated with Discovery, and will be distributed internationally.

The documentary focuses on Dempsey taking his place alongside other iconic Hollywood race car drivers like Steve McQueen, Paul Newman and James Garner as well as the team’s tireless efforts on and off the track in preparing for the return to Le Mans.

Long, who led in each of his first two driving stints, drove nearly the entirety of the race’s final three hours. He had the pace but not the breaks needed to make a move on third place.

“We had a long caution, that didn’t help, and when I knew we were going back to green I asked if we wanted to just throw a Hail Mary, just kind of go for broke, and hope it works out and maybe end up in the fence.

Or do we want to just take what we had and be proud of fourth. Our strategist Jim Jordan told us on the radio we had defied all odds and I agreed with him so we just had fun the last 10 laps.”

Long joined his teammates in being very impressed by the performance of their Porsche 911 GT3 RSR.

“It was amazing,” Long said. “We had no mechanical issues, both Proton Porsches really, our car just ran like a top. It drinks fuel and oil but it just keeps on going, it’s just classic Porsche flat six.”

All three drivers raced with heavy hearts after learning early in the event that Aston Martin driver Allan Simonsen was fatally injured in an accident less than 10 minutes into the race while leading the GTE-AM class from the pole. Long and Simonsen were friends and peers for more than a dozen years.

“I had some choked up moments in the car at 200 mph,” Long said. “It was the biggest mental challenge I have ever had. I spent 13 years with Allan and we met when we were working hourly at a race school in England. I was with him just an hour before the race.

It made me think about the old days, when accidents like this happened once a race and how those guys just strapped in and did the next one. It is not like that now but that’s no consolation for me. It is just a freakin’ shame, he was a great guy.”

Dempsey and Foster only knew Simonsen on the race track but learned of his talent a few years ago.

“We first noticed Allan from our former Dempsey Racing teammate Leh Keen co-drove with him for some of his finest race results,” Foster said. “They finished second overall in the 2010 24 Hours of Nurburgring in a Ferrari F430 and followed it up a month later to finish second in GT2 here at Le Mans.

Those podium appearances in two of our sport’s most iconic races are worthy tributes to Allan as an athlete and top-level professional race car driver. Our thoughts and prayers go out to his family and teammates at Aston Martin.”

The Dempsey Del Piero Racing Le Mans entry was fielded in a partnership with the experienced and proven Proton Competition racing team from Germany.