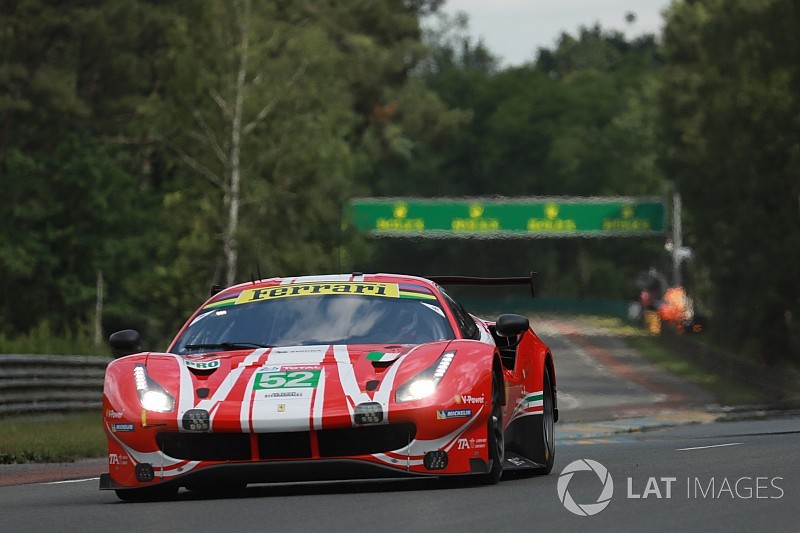 Derani makes his fourth start in the La Sarthe classic this weekend, switching to the AF Corse-run works Ferrari outfit having been part of the Ford crew that finished second in the 2017 race.

The Brazilian, who shares the #52 Ferrari 488 GTE Evo with Toni Vilander and Antonio Giovinazzi, said the chance to race for the Prancing Horse was “nearly impossible” to turn down when it arose at the end of last year and holds special significance for him.

“It’s been a dream of mine to race for Ferrari since I was a little kid, and last year at Le Mans every time I was around a Ferrari it was special,” Derani told Motorsport.com.

“When we’re talking about this amazing brand with this history, and when the opportunity came with the third car to join Toni and Antonio, it was nearly impossible to refuse.

“Like I said, it was a dream of mine, and my Dad [who died two months ago] was a big enthusiast of the brand. He would be really proud to be here if he had the chance.”

By driving for Ferrari, Derani follows in the footsteps of numerous other Brazilians that have made their name with the Scuderia – including Formula 1 grand prix winners Rubens Barrichello and Felipe Massa.

“When I was about 10 years old, it was the time Felipe Massa joined Ferrari, and when you’re young you don’t know much about endurance racing,” Derani added.

“If you have a dream of becoming a racing driver, it’s F1. As a young kid, you see guys like Felipe and think ‘I want to be there’.

“Obviously that didn’t materialise, but to be here today, driving for the brand in a race that’s one of the most important in the world, it’s something I’m really happy about.”

Derani set the #52 Ferrari’s best time in qualifying, finishing 15th place in class – and the 24-year-old is under no illusions as to how tough this year’s GTE Pro battle will be.

“I think as you see by the numbers, we have 17 GTE Pro cars, all of which are driven by professional drivers, so just by looking at that you see how strong the field is,” he admitted.

“It won’t be an easy race but it’s one I’m really looking forward to. Myself, Toni and Antonio have gelled really well together, and this is important for a good result.

“I hope we can deliver what Ferrari deserves in terms of results, because they are bringing a third car not just to make up the numbers, it’s a third car to try and win.”

A Le Mans class victory would be a glittering addition to an already-impressive CV, which includes two wins in the Sebring 12 Hours (2016 and 2018) and one in the Rolex 24 at Daytona (2016) with the ESM IMSA WeatherTech SportsCar Championship squad.

“The objectives in your career, they grow according to what they achieve,” reflected Derani. “I won Daytona and Sebring and then my objective became to win the big races.

“After winning Daytona and Sebring twice, I would like to win Le Mans to put that together in my CV. Then day after day you want more and more.

“For now though, I still have the big desire to win Le Mans to add to those three [victories].”

Is the challenge of Le Mans being diminished?