The world’s best-known endurance race, the 24 Hours of Le Mans, is celebrating its 90th anniversary this weekend. And in a vote for the eleven most important Le Mans cars of all time, thousands of motorsport fans have included no less than five models produced by the Volkswagen Group. 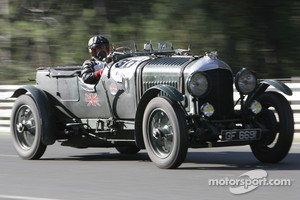 The motorsport classic held in north-western France has been producing legends of the sport ever since 1923. And it’s not just drivers such as Jacky Ickx, Hurley Haywood, Hans-Joachim Stuck and Tom Kristensen who have made history in this classic endurance race, but also the racing cars manufactured by the most successful car makes.

The eleven “Legends of Le Mans” include the following: Bentley Speed Six, Porsche 917K, Porsche 956, Audi R10 TDI and Audi R18 e-tron quattro. All of the legends will perform a lap of honour on the 13.650-kilometre track before this year’s race gets under way.

And the Bentley Speed Six has been given an extra special honour: the winning car of 1929 and 1930 is the vehicle in which the event’s prized challenge trophy will be chauffeured around the track, before being returned to the organisers ACO (Automobile Club de l’Ouest) prior to the start of the race.

Bentley clinched four victories in all at Le Mans in the 1920s. The Bentley Speed Six was the winning vehicle of 1929 and 1930, and was voted the first legend by the motorsport fans. The luxury car brand clocked up a total of six Le Mans wins until it competed for the last time in 2003.

In the 1970s and 80s, no other make of car dominated the Le Mans quite as convincingly as Porsche, which achieved twelve race wins and took firm hold of these two decades with the Porsche 917K and the 956C Coupé.

Already back then, the Group’s sports car subsidiary was demonstrating its lightweight construction expertise, with its 917K boasting a radically light magnesium frame construction that gave it a total weight of 830 kilogrammes and allowed it to reach a top speed of 360 km/h with its 630 hp.

Another legendary vehicle is the Porsche 936 driven by Jacky Ickx and Gijs van Lennep in 1976, which was the first car with a turbo engine to score a victory at Le Mans. With a total of 16 race victories, seven of which were in succession (1981–1987), Porsche is still the most successful team ever to have competed in the world’s most important endurance race.

The sister company Audi has achieved a similar degree of success since 1999, when it first entered Le Mans with one of its endurance race prototypes, and has racked up an impressive eleven victories out of 14 starts. In 2001, the Audi R8 was the first turbocharged direct injection car to win in Le Mans, with its TFSI technology.

The Audi R10 TDI heralded a new era in 2006 as the first diesel-driven vehicle to win the race, and went on to demonstrate the supremacy of its 646 hp TDI engine with victories in the next two years too.

Its successor, the R15 TDI Plus, above all emphasised how economical diesel technology is and still holds the record for the longest distance ever driven in the Le Mans – a distance of 5,410.713 kilometres clocked up by Timo Bernhard, Romain Dumas and Mike Rockenfeller in 2010.

Although there is some way to go before the end of the current decade, the Audi R18 e-tron quattro has already made it into the “Legends of Le Mans”. This superior, winning car of 2012 is the most spectacular and most innovative vehicle to date in the race’s 90-year history, being both the first car to win with hybrid technology and also the first four-wheel drive winner (quattro).

In addition to Bentley, Porsche and Audi, the Group subsidiary Bugatti likewise took the prized Le Mans trophy home on two occasions. This means that 35 of the 82 Le Mans races contested to date have been won by car makes owned by the Volkswagen Group. This year, Audi will once again line up with last year’s winning car, the R18 e-tron quattro, and hopes to repeat this success.