Felbermayr-Proton brings Porsche back to top

Speed, endurance and luck all played major roles in the always intense battle for the GT2 crown at this year's edition of the 24 Hours of Le Mans. Although the name of Porsche often plays a role, this year the 911 GT3 RSR of Felbermayr-Proton pulled ...

Speed, endurance and luck all played major roles in the always intense battle for the GT2 crown at this year's edition of the 24 Hours of Le Mans. Although the name of Porsche often plays a role, this year the 911 GT3 RSR of Felbermayr-Proton pulled off an upset by replacing the Risi Competizione Ferrari on the top step of the podium. 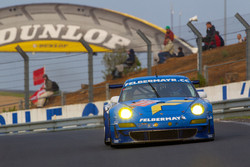 After Risi faltered with gearbox trouble, it appeared Corvette Racing's debut in the GT2 class would end the Ferrari reign. But engine failure and prototype traffic knocked askew the Corvette ambitions. That left the Felbermayr-Proton team's Porsche factory driver line-up of Marc Lieb, Wolf Henzler and Richard Lietz to pick up the pieces and the winner's trophy.

Not quite as quick, the Felbermayr entry was roughly a half-second off the pace of the Risi machine and the No. 64 Corvette. But other than changing brake pads, the No. 77 Porsche ran trouble-free, spending 38 minutes in the pits over the course of 24 hours.

"We couldn't realize the speed of the Ferrari and Corvette," said Henzler. "They pushed really hard from the beginning. We said 'OK. The only thing we can do is run our race and stay out of trouble."

As it was, the GT2 winners finished seven laps ahead of the GT1 winners. "It's nice to finish ahead of all the GT cars, but our goal was to beat the GT2 cars," said Lieb of the intense competition the production-based class has invoked.

The bad luck belonged to the No. 64 Corvette, which had its drivers raving about its handling all weekend. A close dice with the Risi car ended with the latter's gearbox problems. But in the 18th hour, Emmanuel Collard was squeezed into the low-traction tarmac off the line in the Porsche Curves during Anthony Davidson's comeback effort in the No. 1 Peugeot.

The subsequent damage to the rear end cost 32 minutes to fix and then the engine gave way -- the same ending as for the No. 63.

Braking problems took the "two-star" Ferrari of AF Corse SRL out of second place and into fourth. After the right front brakes gave way, Giancarlo Fisichella went down an escape road fast enough to damage the front end of the 430 GTC upon impact with a tire wall. Co-drivers Jean Alesi and the lesser known Tony Vilander helped recover sufficiently over the final five hours to come home fourth. The BMS Scuderia Italia SPA team took the third step on the podium.

The Corvettes' problems and the braking issues at AF Corse elevated the Hankook Team Farnbacher Ferrari GTC into second place. Using the same strategy of consistent lap times that brought the team a surprising second place in the Nurburgring 24-hour, Horst Farnbacher's approach worked out again for drivers Dominik Farnbacher, Leh Keen and Allan Simonsen. The only hiccups were in practice when a problem with the gearbox cluster prevented the team from making the most of the initial four-hour practice session on Wednesday. As it was, the Hancook-shod Ferrari was one of the few GT2 entries that failed to break the four-minute mark on the 8.47-mile Sarthe circuit. 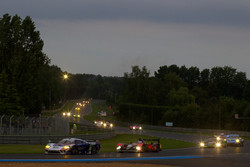 "After the Nurburgring I knew we could do the same thing here," said Keen. "I was pretty confidant. It didn't surprise me in the morning that so many guys had dropped out because they were pushing so hard."

In its swan song, the Larbre Competition's first-place Saleen S7R claimed a victory in its final endurance race, albeit eight and six laps, respectively, behind the first two GT2 cars. The fastest lap of the car shared by Gabriele Gardel, Roland Berville and Julien Canal was three seconds quicker than the GT2 front runners, indicative of the consistentcy of the GT2 cars and their better fuel mileage.