Ferrari triumphs in the Spa 1000 Km

Ferraris filled the top two places on the podium in their class in the Spa 1000 Km, the second round of the Le Mans Series and the Intercontinental Le Mans Cup. Victory went to car number 51, entered by AF Corse and driven by Giancarlo Fisichella and Gimmi Bruni. Thanks to a perfect strategy the first of the two 458 Italia GT2 took the win in the GTE PRO category, ahead of the F430 GT2 crewed by Dominik Farnbacher-Allan Simonsen. Third was the BMW M3 driven by Andy Priaulx and Uwe Alzen. The other AF Corse Ferrari 458 Italia driven by Jaime Melo and Toni Vilander had to to retire a few laps from the end of the six hour race in Belgium. It collided with a prototype car which put an end to its attempt at climbing up the order after incurring a drive-through for having pulled an overtaking move under yellow flags. 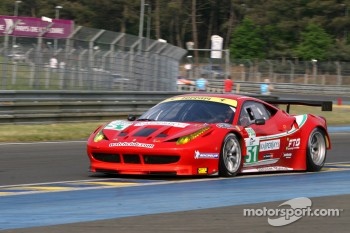 “We are really happy for the team and for Ferrari,” commented Giancarlo Fisichella after the race. “This win is the result of impeccable team work and a fantastic car. The race was closely contested right to the final lap and the decision to do one less pit stop turned out to be winning choice.”

Fisichella and co will be back on track on the weekend of 12 June for the legendary Le Mans 24 Hours, the third round of the Intercontinental Le Mans Cup.