First podium for the Ligier JS P2 at Le Mans!

The Ligier JS P2 cars especially impressed, with all three completing the race, despite this being their first competitive outing ever.

Onroak Automotive’s seven cars, three Ligier JS P2 cars and four Morgans, performed to high standards at Le Mans, meeting the expectations of the teams. The Ligier JS P2 cars especially impressed, with all three completing the race, despite this being their first competitive outing ever.

For its first ever race, the Ligier JS P2, designed and built by Onroak Automotive, has stunned and surprised by finishing on the podium at the legendary 24 Hours of Le Mans. The #46 Thiriet by TDS Racing Ligier JS P2 – Nissan, racing on Dunlop tyres, crewed by Ludovic Badey, Tristan Gommendy and Pierre Thiriet, finished in a well earned 2nd place. The brand new car, delivered only a couple of weeks ago, performed amazingly by surviving the entire 24 Hours with hardly any issues to report, and almost crossing the finishing line first in the LM P2 class. 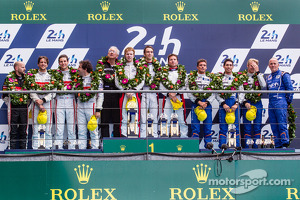 The #35 OAK Racing Ligier JS P2-Nissan-Dunlop performed amazingly, leading for over half the race with the young talented crew of Alex Brundle, Jann Mardenborough and Mark Shulzhitskiy. Sadly, in the final 4 hours, the car started to suffer engine problems and lost power; they finished 5th.

The third Ligier, the #33 OAK Racing Team Asia Ligier JS-P2 HPD-Michelin, had a very consistent race, suffering only from a puncture and a trip into the gravel, and a small pit stop to replace the paddle shift compressor. The Chinese trio of Ho-Pin Tung, David Cheng and Adderly Fong took control of their new car, showed what it was made of, and brought it home in a comfortable 7th in LM P2.

The Morgan LM P2s also performed well and continued to uphold their reputation as reliable cars for the 24 Hours of Le Mans. Apart from the #26 who suffered an early retirement due to an unavoidable collision with a Ferrari, the teams running Morgan LM P2s all finished the race and were very happy with the result.

The #43 Newblood by Morand Racing Morgan-Judd LM P2 running on Dunlop tyres was the highest finishing Morgan LM P2, ending the race in 6th in class.

Larbre Competition finished in 9th, having had a successfully consistent race in the #50 Morgan-Judd-Michelin. The only issue they seemed to have had was a puncture during the night, but otherwise, they kept pace and managed to bring their car home in one piece. For their first season with a prototype, finishing in the top 10 at Le Mans is a real result for the team.

For Pegasus Racing, with their #29 Morgan-Nissan LM P2 that got badly damaged in qualifying, they reached their goal in making it to the end, finishing in 10th. They had a few issues during the race with the cooling duct and had to change their front brake disks, but nothing major to slow them down.

This is a brilliant result for Onroak Automotive to show off its cars and reinforcing its reputation as a leader at the 24 Hours of Le Mans and Endurance Racing.

Jacques Nicolet, Onroak Automotive President: “This is an extremely satisfying result for Onroak Automotive. Seven cars at the start, six at the end, the seventh eliminated by a collision that was independent of the qualities of the car and the drivers. Three Ligier JS P2 cars at the start, three at the arrival. Out of the six cars that finished, they are all in the top ten of the LM P2 class. It’s really a result that the team can be very, very proud of, and especially with the Ligier JS P2 cars, with a 2nd place on the podium, thanks to Thiriet by TDS. We were very close to accomplishing a major feat together.

We could have occupied the first two steps of the podium. It didn’t happen, but I think it will happen soon with the Ligier JS P2 cars, which have shown that they are very well designed, reliable, as they were all at the finish, and very quick. We said we would be here with a new car and we kept our promise. I think that I can proudly make that statement. I need to thank our team that helped us meet this commitment.”