There will be 56 cars at the test day on Sunday 1st June.

The list of teams entered for the 2014 Le Mans 24 Hours (14 - 15 June) has undergone changes due to several withdrawals and the integration of two reserves in LM GTE and three in LM P. In addition, there will be 56 cars at the test day on Sunday 1st June.

As there are no reserves left in LM GTE, the no. 50 Larbre Compétition Morgan-Judd (nominated driver Jacques Nicolet), the first LM P reserve, has been incorporated into the LM P2 category. 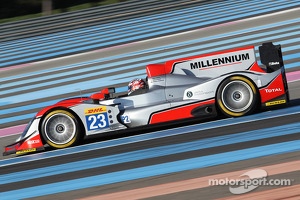 In the LM P category, Millennium Racing is unable to confirm its initial entry of two Oreca 03-Nissans (nos 22 and 23). As a result they have been replaced by the no. 42 Zytek Z11SN-Nissan (Caterham Racing, nominated driver Chris Dyson) and the no. 29 Morgan-Nissan (Pegasus Racing, nominated driver Julien Shell). Although the Signatech-Alpine team was second on the list of LM P reserves it decided not to honour its entry, the no. 30 Alpine A450-Nissan.

There are no entrants left on the reserve lists for the 2014 Le Mans 24 Hours. Fifty-six cars will be at the start of the 82nd event on 14th June.

Today the Automobile Club de l’Ouest is publishing the list of participants in the Le Mans 24-Hours test day on 1st June 2014. The no. 79 Porsche 911 GT3 RSR (Prospeed Compétition) will not be present. On the other hand, AF Corse has entered an additional Ferrari 458 Italia. This car whose nominated driver is Duncan Cameron will have the number 55.