Oliver Gavin says he finds it baffling that Corvette stablemate Marcel Fassler was judged to blame for the crash that eliminated the #64 car from the Le Mans 24 Hours. 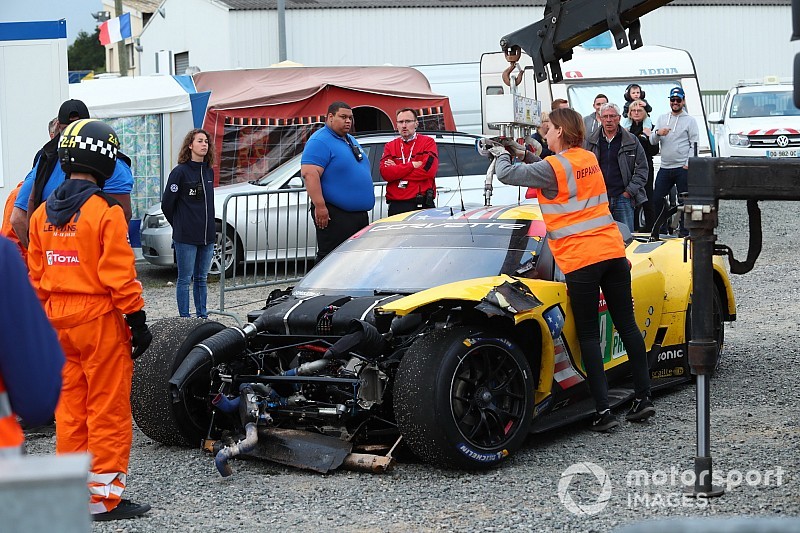 Fassler, in the car he shared with Gavin and Tommy Milner, suffered a heavy crash at the Porsche Curves just beyond one-quarter distance, after the Swiss driver tagged the #88 Dempsey-Proton Porsche of Japanese gentleman driver Satoshi Hoshino.

The three-time Le Mans winner was taken to the medical centre and then a local hospital for a CT scan, but escape the impact with nothing worse than bruising.

While the stewards assessed Fassler a 7,000 euro fine and six penalty points on his licence, Gavin said he held Hoshino entirely to blame for the incident, pointing out the bronze-rated driver had changed his line at the last second.

"What happened with Marcel is just crazy," Gavin told Motorsport.com. "For us to get turned into the wall by an Am driver who is clearly out of his depth, looks terrified, he'd been off numerous times [already]…

"When you are competing in multi-class racing and you're making split decisions, you're looking for cues, you're picking up all the body language from the car in front. And he [Hoshino] gave absolutely every single indication he was keeping out of the way.

"He was 45km/h slower, he let the previous two cars go by [on the inside] and then he just does something random and pull right down on the racing line, takes us clean out of the race. That sort of thing is something that needs to be looked at again."

He added: "The guy driving our car [Fassler] has won Le Mans three times, so he certainly knows what he's doing. He knows the deal and how to get it done.

"So for the fine to be given to him and the penalty points, it's just… I'm battling to understand how that's right."

Fassler's crash left the #63 car of Antonio Garcia and Mike Rockenfeller and Jan Magnussen carrying Corvette's hopes, and heading into the morning hours the trio were locked in a close fight with the leading AF Corse Ferrari.

However, when Magnussen pitted under the safety car in hour 21, he was held at the end of the pitlane – giving the #51 Ferrari crew a one-minute lead it could nurse to the finish.

Shortly after, Magnussen spun at the Porsche Curves while trying to claw back the lost ground, hitting the barriers, an incident for which the Dane accepted the blame.

"When the safety car split us, the win was gone for sure, but we could have still had second," Magnussen told Motorsport.com.

"Then I didn't keep enough heat in the tyres. So when I clipped the kerb at the Porsche Curves, I spun and hit the wall, and damaged the suspension.

"Horrible feeling. I can't even begin how to describe how I felt for the guys, all that hard work to come away from nothing. They deserved a lot better."

Gavin said watching the challenge of the #63 crew fall apart in the final hours was painful for him to watch.

"It was very hard to see what happened to the sister car, with the safety car and then Jan's accident," he said. "They deserved the victory today, they were fast all race and led for long periods.

"That's just very tough, but it's the nature of the race. It chooses you and it chose the #51 [Ferrari] car today."