Motorsport.com's countdown of the biggest stories in racing this year continues with the shock news of G-Drive Racing's disqualification from the Le Mans 24 Hours after its dominant LMP2 class victory.

It was little surprise to see G-Drive Racing's #26 Oreca dominate the secondary division of the 86th running of the Le Mans 24 Hours.

After all, the Russian outfit - whose effort was being run out of the TDS Racing workshop - had come off the back of a convincing victory in the FIA World Endurance Championship season opener at Spa (as a one-off entry), as well as an equally commanding European Le Mans Series win at Monza.

Having tried to bend the rules surrounding driver classification by entering an all-pro line-up of Jean-Eric Vergne, Roman Rusinov and Matthieu Vaxiviere, G-Drive finally backed down by replacing the latter with Andrea Pizzitola, who has emerged as one of the most convincing silver-rated drivers in sportscar racing.

With the choice LMP2 car (Ligier and Dallara continue to lag behind Oreca) and a driver line-up straight out of the top drawer, it seemed Rusinov and his G-Drive concern's long wait for a class victory at Le Mans was coming to an end. As so it proved, at least initially.

A rapid first pitstop propelled the #26 into the class lead, and from there Vergne, Rusinov and Pizzitola and the G-Drive pitcrew didn't put a foot wrong. With no unforeseen stoppages or incidents to slow their progress, the trio simply pulled away from their class rivals and ended up winning by two laps.

But the following day, the bombshell dropped in the form of a stewards' bulletin: G-Drive and TDS had cheated.

The full technical explanation of what they did wrong is too long to reproduce in full here, but it concerned the use of an illegal device inserted in the refuelling rig that essentially sped up fuel flow and, by extension, pitstops.

The stewards of the meeting were alerted to this by the technical delegates, who noted that the pitstops of the #26 (and its sister #28 machine) were significantly faster than those of their rivals.

A glance at the pitstop analysis sheet shows the #26 car's fastest trip to the pits was 1m01s, with an average of 1m09s.

Compare that to the car that ultimately inherited victory, the #36 Signatech Alpine Oreca of Nicolas Lapierre, Pierre Thiriet and Andre Negrao, whose fastest stop (excluding a late splash) was 1m07s. Their average was 1m15s.

G-Drive and TDS appealed the outcome, with their case not being heard until mid-September and the verdict not being delivered until the start of October.

They tried to convince the FIA International Court of Appeal that their additional part was not explicitly banned by the rulebook, and that it was a "commendable technical innovation" - but the court ruled that, because the part extended into the fuel flow restrictor (which is tightly regulated), it was illegal. The disqualification stood.

The sad thing was that, if it had chosen to play by the rules, G-Drive would have still won.

It was estimated by the appeal court that the team gained six to 10 seconds per pitstop with the use of its illegal device. Even if we assume the gain was at the latter end of that scale, that's only a total of 360 seconds (six minutes) over the course of the race for the #26 car.

The winning margin for Vergne, Rusinov and Pizzitola was two laps - at least seven minutes.

It was a sad outcome all round. The Signatech Alpine squad didn't exactly deserve to win, having been beaten on pace by G-Drive. But it was equally clear that the Russian outfit's ill-gotten victory couldn't be allowed to stand.

Given the race for outright victory wasn't exactly a thriller either, with Toyota romping home to a 12-lap win, it merely cemented Le Mans 2018 as one that will be remembered for the wrong reasons. 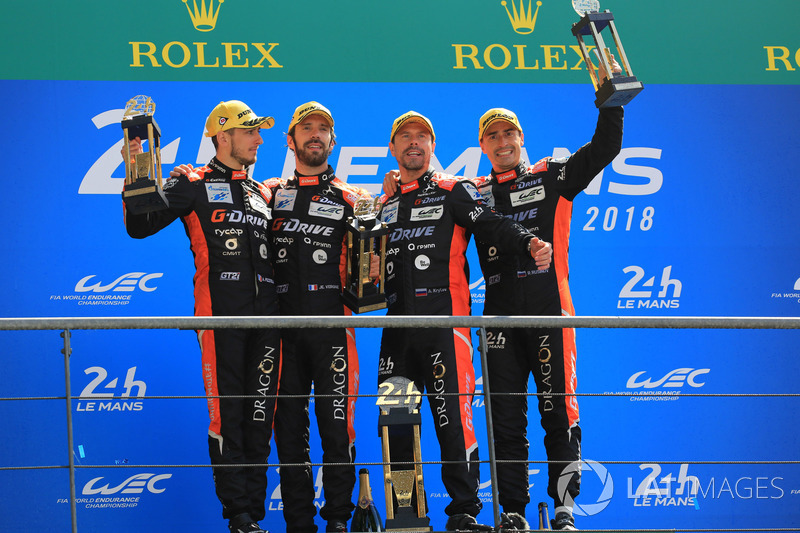