The team will have two Nissan powered Ztyek prototypes in the full FIA WEC championship.

On Friday, in Paris, at a conference organised by the ACO and the FIA WEC, the invitations for the 2013 Le Mans 24 Hours were disclosed. The list of the full season entries for the 2013 FIA World Endurance Championship were also announced. Greaves Motorsport is pleased to be a part of both initiatives with two entries for the 90th anniversary running of greatest endurance race of them all and one full season entry in the FIA WEC. Competing in the very popular LM P2 class with their Nissan powered Zytek prototypes the team are looking to repeat their successes of 2011 when they took victory at Le Mans and the European Le Mans Series title. 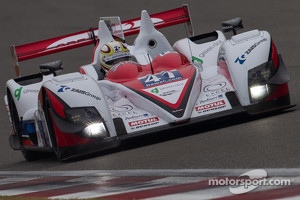 Team Manager Jacob Greaves gave his reaction. “The whole team is very excited to have been honoured by the ACO and the FIA WEC with the invitations to Le Mans and the World Championship. We take this as a vote of confidence in us a team and to our commitment to endurance sportscar racing. We have invested heavily in several aspects of our business in the past twelve months and will be looking to run at the head of the field. Even in these difficult economic times the ACO and FIA WEC have assembled a very strong grid, for which they should be congratulated. We are proud to be part of this resurgence of endurance racing.”

Tim Greaves, Team Principal, was in Paris. “It is very satisfying to receive an additional invite to the Le Mans 24 Hours to go with the invite that comes with our FIA World Endurance Championship entry. We are still in discussions with a number of drivers regarding all aspects of our programme for 2013 but nothing is certain till contracts are signed. We are still open to approaches from any other interested parties as now we have a guaranteed six seats at Le Mans.”

Final details of the rest of the team’s plans for 2013, including the driver line up, will be announced shortly. The team’s first race will be next month in Florida at the 12 Hours of Sebring.