Toyota continued to command the Le Mans 24 Hours at one-third distance, but an off for Jose Maria Lopez at the start of the eighth hour gifted the lead to the #8 crew. 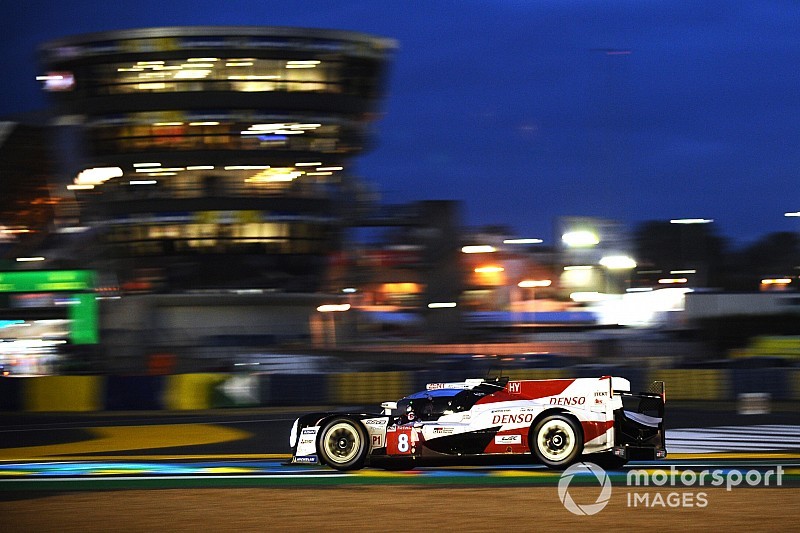 Early in the sixth hour, the #7 Toyota was more than a minute ahead of the #8 machine, but a series of safety cars and full-course yellows effectively reset the fight between the two dominant hybrids.

The #7 car's lead was effectively wiped out when the safety car was deployed later that hour for a major crash involving Marcel Fassler's Corvette and Satoshi Hoshino's GTE Am class Dempsey-Proton Competition Porsche.

Fassler and Hoshino made contact at the Porsche Curves, sending the #64 Corvette violently into the barriers and making it the race's first official retirement. The #88 Porsche of Hoshino was also withdrawn after the Japanese gentleman driver made it back to the pits.

In hour seven, a full-course yellow caused by Thomas Laurent losing it under braking for the second Mulsanne chicane and hitting the barriers in the #3 Rebellion, which allowed the #8 Toyota a cheap stop that got it ahead of the #7 for the first time.

The FCY later morphed into a safety car, bringing the Toyotas nose-to-tail, and soon Lopez passed Kazuki Nakajima to retake the lead - only to then skate through the gravel at Mulsanne corner at the start of hour eight and fall back into second.

With eight hours complete, Nakajima held a 10-second lead over Lopez, with both Toyotas a lap up on the SMP Racing BR Engineering BR1s that circulated just eight seconds apart in the hands of Stephane Sarrazin and Vitaly Petrov.

Rebellion did well to get the #3 Rebellion back out without losing a lap after Laurent's crash, helped by the safety car, but a subsequent trip to the garage left the car a lap off the SMPs and two behind the Toyotas.

The other Rebellion, the #1 machine, ran sixth and four laps down following an off for Bruno Senna at Tertre Rouge.

A tight battle for LMP2 honours was led at the eight-hour mark by Jean-Eric Vergne in the #26 G-Drive Oreca, helped by a slow stop for the #36 Signatech Alpine Oreca.

Vergne passed Andre Negrao on track towards the end of hour seven at Indianapolis shortly prior to that, and with eight hours gone the Formula E champion held a buffer of 12 seconds over Nicolas Lapierre.

Anthony Davidson handed off the #31 DragonSpeed Oreca to Roberto Gonzalez in third place, 45s down on the class lead at the one-third mark, ahead of the two Jackie Chan DC Racing Orecas of Stephane Richelmi and Jordan King.

Best of the non-Orecas was the sixth-placed #22 United Autosports Ligier.

Porsche started to tighten its grip on the GTE Pro battle as night fell, as Kevin Estre pulled out a 10-second lead in the #92 Porsche over Antonio Garcia in the sole surviving #63 Corvette.

Garcia had just passed Alessandro Pier Guidi's #51 Ferrari before the end of the eighth hour, with Harry Tincknell following closely in fourth in the #67 Ford GT.

The #93 Porsche had lost touch with the lead pack during one of the safety car periods, but was able to close back up during another caution period and ran fifth with Patrick Pilet at the helm ahead of the second works Ferrari, the #68 Ford and the #91 Porsche.

Aston Martin's struggles continued following its last-minute Balance of Performance Change, both Vantage GTEs having dropped to the rear of the class along with the BMW M8 GTEs and the Risi Competizione Ferrari, the only non-factory car in the Pro category.

In GTE Am, Jeroen Bleekemolen gave the Keating Motorsports Ford GT a major lead, which was bolstered by fortunate safety car timing, but that was whittled down when owner-driver Ben Keating took over the wheel of the Wynn's-liveried #85 car.

With eight hours down, Keating was some 20s clear of Jeff Segal in the JMW Motorsports Ferrari, with Jorg Bergmeister a further 1m20s down in the Project 1 Porsche.

Aston Martin's hopes of giving the old-generation Vantage a victorious send-off were dashed when Paul Dalla Lana went off into the gravel at the Porsche Curves, which preceded a 35-minute trip to the garage. Pedro Lamy later stopped out on track in the wounded #98 car.